Orthodoxy in Dialogue’s readers are urged to read the present article in conjunction with the following: 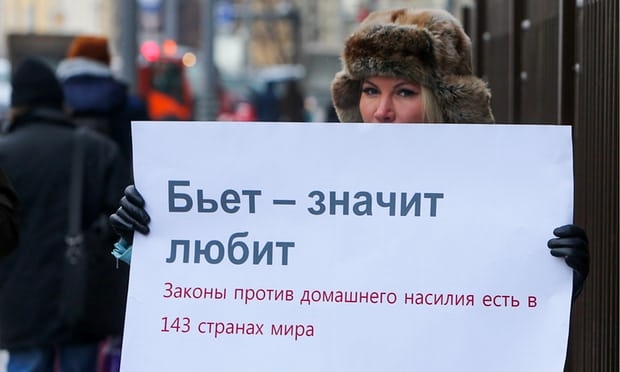 “To beat means to love. 143 countries in the world have laws against domestic violence.” (Photo by Vladimir Gerdo/TASS)

Russian women suffering domestic violence are being deterred from going to the police since its partial decriminalisation last year, campaigners have claimed after a dramatic fall in reported incidents.

The state statistics, released in July, reveal that the number of cases of domestic violence reported to the police in 2017 almost halved since physical abuse became punishable by a fine rather than time in prison.

Controversial amendments to Russian law decriminalised some forms of domestic violence in February 2017. The changes mean violence against a spouse or children that results in bruising or bleeding but not broken bones is punishable by 15 days in prison or a fine of 30,000 roubles (£380) if they do not happen more than once a year. Previously, these offences carried a maximum jail sentence of two years.

Marina Pisklakova-Parker, head of the Anna Centre, an NGO that provides support to victims of domestic abuse, said the statistics showed women were less inclined to report cases to the police, rather than that decriminalisation had sharply reduced the incidences of domestic violence.

“The combination of the state and helpline statistics show that domestic violence has not decreased in Russia, but rather the opposite,” she said. “State statistics reflect only criminal cases where the state could respond according to the existing system of legislation … The amendment offers domestic abusers this easy out, and so the decriminalisation has proven to be very dangerous to the safety of thousands of Russian women suffering from men’s domestic violence.

“This decision sends a message that the state doesn’t consider familial battery as a criminal offence and a violation of women’s human rights. The decriminalisation is a signal that domestic abuse is not a serious issue, and inevitably it gives perpetrators a greater sense of impunity.”

Anna Rivina, who founded Nasiliu.net, said: “The state loves numbers. When discussing decriminalisation they can now use these statistics to say that women are not asking for help, and therefore that the levels of domestic violence must be lower.

“However, this is not the case. Instead, statistics are lower because women are even less inclined to ask for help than they were before.”

In December last year it was revealed that Russian women who are victims of domestic abuse are often forced to pay the fines handed down to their abusers.

According to domesticviolence.ru, more than 16 million women a year are estimated to experience domestic violence in Russia, but only 10% of them go to the police.

This article appeared on August 16, 2018 on The Guardian.

Marianna Spring holds a BA in French and Russian from Oxford University and works as a journalist in London UK.

A blessed Feast of the Dormition to our brothers and sisters around the world.