BBC Three’s Stacey Dooley has produced a 53-minute documentary, posted on January 31, entitled Russia’s War on Women. If you live in the UK you can watch the video on BBC iPlayer; outside of the UK you can watch it on DocUR. (For additional context see Ivan Nechepurenko’s January 25 article, “Russia Moves to Soften Domestic Violence Law,” in The New York Times.) 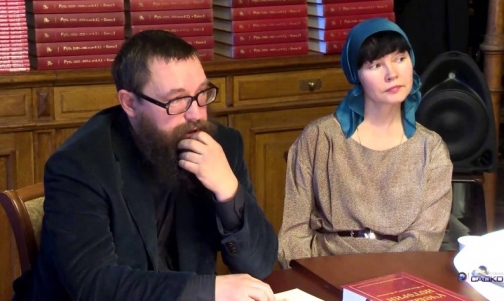 The segment on Russian millionaire Herman Sterligov and his wife Alyona has been making the rounds of Facebook for the past few days. In the full video linked above it begins at 8:29 when Dooley’s car pulls into the Sterligov compound and she is given a wrap-around skirt to cover her slacks. The interview with Sterligov starts at 9:25; at 13:25, he allows his wife to answer some of Dooley’s questions, but he overrides one of them. They bid adieu at 15:00. 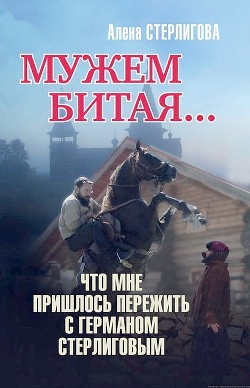 In these five and a half minutes we learn that Herman beats his wife when he feels that she deserves it. For her part, she has written Beaten by My Husband… What I Have Had to Endure with Herman Sterligov, a book in which she defends wife-beating. (In her interview under her husband’s watchful eye she calls it “natural.”) The meaning of the photoshopped cover image could not be clearer: in front of the cabin where they and their five children live, with the Church giving her implicit blessing from the romantically hazy background, Alyona stands—with arms at her sides, as we Orthodox do when we pray—in motionless submission, seconds before Herman’s horse comes pounding down on her head.

The back story of the worldly millionaire who suddenly got religion and abandoned everything to devote himself and his family to a “traditional” Russian Orthodox life—a “tradition” which condones wife-beating—makes Dooley’s interiew and Sterligova’s book all the more troubling. Russian Orthodox men who wish to govern their wives and children in this manner have only to appeal to Domostroi (Домострой, Household Order, published in English translation by Cornell University Press), a 16th-century compendium of household advice in minute detail, written for the upper classes of Ivan the Terrible’s era. Here we read:

Whenever a wife committed a transgression of any kind, her husband had to punish her. This is what the Domostroi recommends: “Husbands were admonished not to use wooden or iron rods on their wives, or to beat them around the face, ears or abdomen, lest they cause blindness, deafness, paralysis, toothache, or miscarriage.” […] The Orthodox Church castigated such practices and used to grant divorce permissions to maltreated wives, especially if they were innocent [emphasis ours].

The Orthodox Church castigated such practices and used to grant divorce permissions to maltreated wives, especially if they were innocent.

Whatever value Domostroi may have as a cultural artifact attesting to an era of especially severe misogyny in Russian history, it does not—we repeat, does not—represent anything at all of the Holy Tradition of the Orthodox Church. Institutionally the Russian Church condemned it then; the question is whether the Russian Church today—the patriarchate, the episcopate, the parish priests, the monastic elders and eldresses—has the moral stature to condemn it now.

Men and women of Russia and everywhere in the Orthodox Church, husbands and wives, fathers and mothers, sons and daughters: Nowhere does Holy Tradition ever allow a man to beat his wife for any reason.

Let us repeat that: Nowhere does Holy Tradition ever allow a man to beat his wife for any reason.

If your husband is beating you, leave him. If he beats your children, leave him.

Here we have an icon of our Lord God and Saviour Jesus Christ entering into His sufferings, His wrists lashed together, His precious blood dripping from the wounds where the thorns have pierced His head, the mockery of the fake sceptre and imperial robe—and through it all, His eyes downcast in quiet acceptance of His fate.

The name of the icon? Ὁ Νυμφίος—Женихъ—the Bridegroom…the “Husband.” Here we have the image of the divine-human Husband beaten for His Bride, but never, ever beating her.

In this icon we have the paradigm for Christian husbands, how they are to exercise their headship over their wives. We hear this in the Epistle reading in the Orthodox Service of Marriage, where the Holy Apostle Paul describes a mysterious union of reciprocal obedience between husband and wife:

Already St. Paul has forewarned the husband that he is expected to exercise his headship in no different a manner from that in which Christ exercised His:

Husbands, love your wives as Christ loved the Church and gave Himself up for her…. Even so, husbands should love their wives as their own bodies. He who loves his wife loves himself. For no man ever hates his own flesh, but nourishes and cherishes it, as Christ does the Church…. This mystery is a profound one…let each one of you love his wife as himself….

In the Gospel reading for the Orthodox Service of Marriage we hear:

Every man serves the good wine first; and when men have drunk freely, then the poor wine; but you have kept the good wine until now.

That is, the “good wine” of grace upon grace transfigures all of human life—even marriage—into the radiant image and likeness of divine life. Divine grace collaborates with diligent human effort to transform the “old wine” of natural marriage into the “new wine” of marriage worthy of the Kingdom of God, a new marital paradigm in which the Christian husband assumes the role of Him who came not to be served, but to serve; and the Christian wife offers her “submission” not under compulsion, but as a free-will act of love because she sees her husband dying every day for her and her children on the cross of his crucified male ego.

Divine grace does not emasculate men; quite the contrary, it redeems and transfigures their fallen, sinful, belligerent masculinity according to the likeness of the deified masculinity of the incarnate Son of God.

Holy Scripture is not enough for us Orthodox, you say? None of that sola Scriptura for us? We also need the Fathers? Well and good, let us have the Fathers.

On the Epistle reading:

And on the Gospel reading:

Therefore, let us love with our whole mind, dearly beloved, the marriage of Christ and the Church, which was prefigured then in one city and is now celebrated over the whole earth.

Everywhere and at all times, implicitly and explicitly, Holy Tradition commands husbands: Imitate Christ, who died not even for a faithful wife, but for an unfaithful one. Take the icon of Christ the Bridegroom—ὁ Χριστὸς ὁ Νυμφίος—Христосъ Женихъ—as your one and only model of husbandhood and headship. Tradition gives us no other model.

Become Christ to your wives in all His humility, and service, and self-sacrifice, and love.

Click here for the Russian version of this article.

Giacomo Sanfilippo is a PhD student in Theological Studies at Trinity College in the University of Toronto, a failed husband and priest, the father of five and grandfather of two, and an editor at Orthodoxy in Dialogue.

18 thoughts on “ON “ORTHODOX” WIFE-BEATING by Giacomo Sanfilippo”