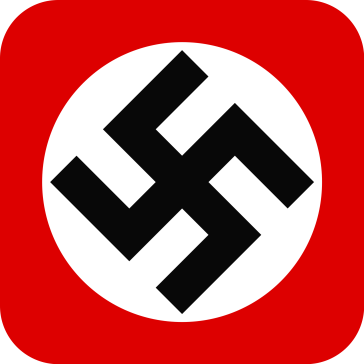 At 12:41 this morning CBS News published “Black History Month Posters Covered Up at University of Tennessee with Ones Referencing Hitler.” Copyright restrictions do not allow us to republish it here, so we offer two brief excerpts:

The University of Tennessee’s president said vandals at the Chattanooga campus have tried to cover up posters for black history month with ones referencing Adolf Hitler. The white nationalist group the Traditionalist Workers [sic] Party has advertised an event at the Knoxville campus….

The Traditionalist Workers [sic] Party has been recognized by the Southern Poverty Law Center as a hate group. The group said its founder, Matthew Heimbach [“energized” by the deadly events in Charlottesville] would be speaking at Knoxville campus on Feb. 17 to launch a lecture series. Heimbach was one of the organizers of the Unite the Right rally in Charlottesville, Virginia that turned deadly when a suspected white nationalist plowed a car into a group of counter-protesters and killed a woman.

We at Orthodoxy in Dialogue beg you to read the full CBS report and watch the accompanying videos without delay.

This is the same Matthew Heimbach who found Orthodox Christianity compatible with his views—the fact that he was excommunicated offers small comfort in the grand scheme—and the same Traditionalist Worker Party (TWP) whose Matthew Parrott boasts of growing numbers of secret supporters among Orthodox clergy and seminarians.

Between January 22 and February 8 we have done everything in our power to alert our hierarchs and seminaries to this situation here, here, here, here, and here. Neither the Assembly of Bishops, nor any individual hierarch, nor any seminary has so much as acknowledged our concerns, let alone promised to launch a full investigation into the truth and extent of TWP’s claims regarding its infiltration into our Orthodox Church.

Here, in its own words, is the full scope of this demonic threat to our Church (red highlighting ours):

The university campus has for generations been the home of the most radical forces of the anti-White Leftist movement. From Germany to Greece to the United States, the former places of higher education have been turned into ideological indoctrination centers for Jewish intellectuals to turn our youth against their people, their religion, and their culture.

Conservatives have long ceded the universities in their perpetual march towards the edge of the political cliff, but luckily for the minds of our youth, the Traditionalist Worker Party is a revolutionary National Socialist [Nazi] organization. We will not give a single inch to the enemy, and we will keep confronting them until we’ve seized what belongs to us: control over our destiny from this globalist imperial regime.

Our march to retake our college campuses begins with directly challenging the ideas promoted by the Left and their kosher conservative professors by bringing the message of National Socialism [Nazism] to the students of our universities.

Following in the example of Commander George Lincoln Rockwell [1918-1967: founder of the American Nazi Party], myself and Deputy Party Leader Tony Hovater are going to begin traveling to university campuses to explain the ideology of National Socialism [Nazism], challenging the misconceptions of our ideology, and putting forward how our worldview is not only good for White folks but the entire world.

Students who are active in Leftist groups who oppose capitalism and imperialism will hear, likely for the first time, how National Socialism [Nazism] is the only way to truly combat the current global status quo and truly fight for the sake of economic and social justice.

Conservative students who want to defend the unborn [this “legitimizes” the rest], traditional values, and to have a secure nation will see how Conservative, Inc. has betrayed them and only a Party that is built by our people, for our people, can hope to revive our national spirit and character.

Students of Color will be able to understand how White National Socialists [White Nazis] want peace and cooperation between the races, how we desire for them to be empowered within their own nations and communities, and how we together can fight against the forces of multiculturalism and globalism that are destroying all unique ethnic communities and cultures.

The first of our National Socialism or Death [Nazism or Death] tour is kicking off at the University of Tennessee on February 17th at 1pm. Our local unit in Knoxville has been very active, and we look forward to the speaking engagement that they are putting together. We invite all White nationalists and TWP Party comrades to sign up for joining us at the speech and a weekend of activism and fellowship. Sign-up will allow us to plan for food, materials for our activism events, and have everyone be vetted and able to participate in our plans for a safe entry and exit of the event.

Tickets will be distributed to vetted nationalist comrades prior to the event, and a number will be available for students and staff at the discretion of our security team. We want to have a fruitful and respectful exchange of ideas at our Q&A session so anyone who disagrees with us, has questions, or is just intrigued; come on out, just plan to be polite and non-violent.

Party comrades should plan to attend in their uniform and be prepared for a very productive weekend.

We are all looking forward to a successful first step to start the march to retake our universities.

6 thoughts on “NATIONAL SOCIALISM = NATIONALSOZIALISMUS = NAZISM: OUR BISHOPS AND SEMINARIES MUST RESPOND NOW”