Neither Father Josiah Trenham’s (here) nor Father Joseph Gleason’s (here and here) dangerous views on marriage represent Holy Tradition with respect to the nature of the husband-wife relationship. Ignore them. For a more wholesome exposition (although by no means the final word) see our St. Paul on Marriage and On “Orthodox” Wife-Beating.

If it seems extreme to bring wife-beating into this conversation, psychotherapists who follow Orthodoxy in Dialogue closely have been unanimous in their warnings that, whether intentionally or not on their part, these priests’ perversions of “theology” set the stage for any manner of abuse of wives and children. 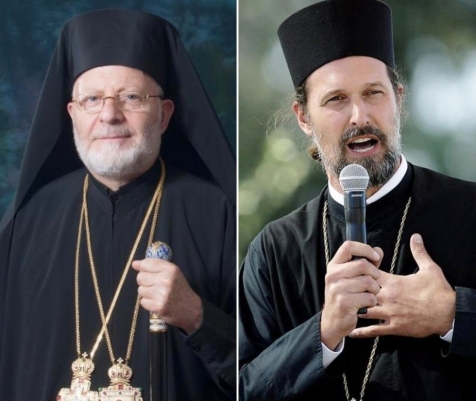 The Antiochian Orthodox Christian Archdiocese’s Father Josiah Trenham of Hatewatch fame (see here, here, here, and especially here) has seen an increase in attention on the internet of late—not due to his hysterical fearmongering against LGBTQ people (in Trenham’s own words, “those tolerance tyrants, that lavender mafia, those homofascists, those rainbow radicals“),  but to his equally toxic “teachings” on marriage and the “proper” way for husbands and wives to relate to each other.

In fact, the attention Trenham is receiving comes from those who claim to have been directly harmed by his “teachings” and “pastoral care.”

When I was a wide-eyed catechumen, I didn’t think I had the authority to dismiss the teachings of an Orthodox priest. “The Good Wife” shocked and disturbed me the first time I listened to it, but I convinced myself that my reaction was due to my own prideful nature, which had to be conquered if I was to become a Good Wife. It’s difficult to convey the damage this did to my marriage and my faith, damage which I am still working to repair.

Please read this woman’s full testimony at The Joy of Dirty Dishes. Note that she has devoted two blogposts to Trenham’s “The Good Wife” so far: the second one is here.

Then read the conversation—the original post and the comments—that took place at Reddit a week ago. One participant alleges that Trenham told him to pray his autism away.

For the well-being and safety of children, women, and men—straight as well as LGBTQ—we urge Metropolitan Joseph to examine Father Trenham’s written, video, and audio pronouncements thoroughly, and to determine if these represent the Orthodox faith as it is understood in the Antiochian Orthodox Church.

Are these the kinds of messages that His Beatitude wishes the children, women, and men of his God-entrusted flock—straight as well as LGBTQ—to be hearing from the priests under his omophorion?

We respectfully invite Metropolitan Joseph to submit a response to Orthodoxy in Dialogue for publication.

See the Josiah Trenham: The Scandal section in our Archives 2020.

For our report on another interesting Antiochian priest see Orthodoxy, Sissies, and the Performance of Masculinity.

See also Pastoral Practice in the 21st Century: Some Thoughts on Premarital Counseling and the extensive Sexuality and Gender section in our Archives by Author.

Note to Our Readers: Please consider becoming a Patron by making a one-time, occasional, or monthly financial contribution to support the work of Orthodoxy in Dialogue. To make a monthly commitment visit our Patreon page. To make a one-time or occasional contribution send the amount of your choice to editors@orthodoxyindialogue.com via PayPal or (if you reside in Canada) interac e-Transfer. Your support is deeply appreciated.

9 thoughts on ““THE GOOD WIFE” ACCORDING TO FATHER JOSIAH TRENHAM: DOES METROPOLITAN JOSEPH APPROVE?”