In his Metapedia article Johnson claims to hold a PhD from the University of Nebraska, with a dissertation on Michael Oakeshott‘s critique of modernity, and to be an Orthodox priest. He seems to have drifted from one uncanonical jurisdiction to another. His priesthood does not seem to deter him from being a member of the neo-Nazi Traditionalist Worker Party (an SPLC-designated hate group), or from sporting his Orthodoxy and Death black teeshirt at public neo-Nazi events. 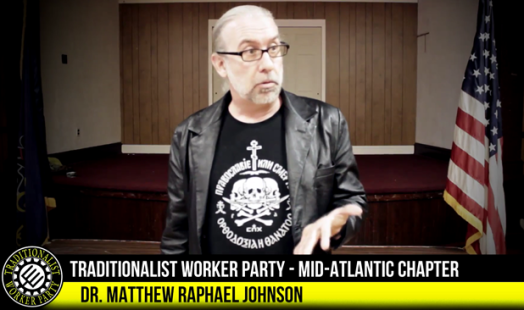 Nor does it deter him from producing “The Orthodox Nationalist” podcast on Radio Aryan: Fighting for a White Revival, Partners in the Movement of National Salvation.

TO THE ASSEMBLY OF CANONICAL ORTHODOX BISHOPS OF THE UNITED STATES OF AMERICA AND TO THE ADMINISTRATORS OF OUR SEMINARIES:

Please do not take comfort in Johnson’s uncanonical status. The cancer of white supremacy and neo-Nazism respects no such boundaries as “canonical” and “uncanonical.” This is our problem—a very public problem—which must be handled in a very public and transparent manner. It is only a matter of time before the mainstream media connect the dots that lead straight to us.

The following appeared on the Radio Aryan website on March 7, 2018.

Dr Matthew Raphael Johnson sends a message to the Orthodox clergymen who have chosen to follow political correctness instead of Biblical example.

On February 27, 2018, the Orthodox population in America was lectured on “racism” by its clergy in the form of a document called “A Statement Concerning the Sin of Racism.” The level of self-righteousness, ignorance and caricature here shows how cut off the Orthodox clergy are from reality. It shows their fear.

This statement derives from their desire to appeal to the powers that be. They seek the approval of the Regime. It is a maudlin, insipid, mawkish, bathetic attempt to sound “mainstream.” It has no other source.

They pontificate without any facts, understanding or apparently, real world experience. Their statement reads like a college Freshman trying to please his multicultural Anthropology professor. Its an embarrassment to the church.

While the Catacomb church in Russia defied the Soviet government at the expense of their lives, these men are in a panic that the Left might call them names on the internet. It’s a disgusting display of Beta-manhood. They are forcing modern liberalism onto a church that is liberalism’s antithesis.

The Orthodox church’s ancient position on race and Nationalism is diametrically opposed to this jejune, sentimental nonsense. My article“Interracial Marriage and Church Doctrine” explains the proper understanding of race without the fear and conformity of these clergymen, many of whom I respect otherwise.

My response to this rhetoric is purely based on facts and logic, something the authors and signatories of the document have little affection for. I describe the basis for racial separatism given the violence our communities are subjected to by non-Whites daily.

To those who signed this: The blood of the thousands of women raped by these animals is on your hands. This is because you’ve condemned any organization against the perpetrators of Europe’s demise. This a racial war because crime in Europe and America is racial. I never wanted to become a racial nationalist, it was forced upon me given the facts of life. You are brainwashed by the press who have made it their policy to cover over the racial nature of violent crime worldwide. In trying to disarm the fight against it, you are partly responsible.

The Orthodox Nationalist: A Statement Concerning the Necessity of Racism – TON 030718

The Orthodox Nationalist will be back on Radio Aryan next Wednesday at 3pm EST/8pm GMT
See the daily radio schedule for more alt-right audio available for download.
Join the chatroom, visit the bootleg archive and follow the feed
Dr Johnson’s Patreon Page

See the White Supremacy and Racism category near the top of our Archives by Author for a complete list of articles, letters, and editorials on this topic.