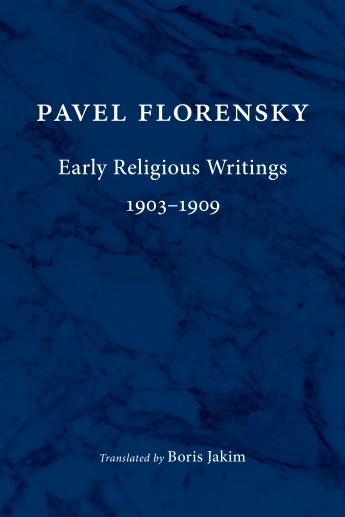 Boris Jakim began to establish his reputation as one of the foremost English translators of modern Russian religious literature when he published four books by S.L. Frank (1877-1950) between 1983 and 1993. He introduced Pavel Florensky (1882-1937) to the English-speaking world in 1997 with his translation of his magnum opus, The Pillar and Ground of the Truth: An Essay in Orthodox Theodicy in Twelve Letters, originally published in 1914. While it has become something of a commonplace to call Florensky one of the 20th century’s preeminent Orthodox theologians, very little of his literary corpus is available in English. Consequently anything like “Florensky studies” remains in its infancy among academics who do not read Russian fluently. Jakim’s latest contribution adds another important piece to the complex puzzle that comprises the man Florensky.

The years covered by this volume attest to Florensky’s extraordinary intellectual gifts in early adulthood: he wrote these essays between the ages of twenty-one and twenty-seven. After the secular upbringing typical of Russia’s educated classes at the time, and while a student of mathematics at Moscow University, he surprised his parents in 1903 by committing himself to the Orthodox Church in that era’s movement of “returning intelligentsia.” A year later he caused them even greater consternation when he abandoned a promising career in maths and sciences to enrol at the Moscow Theological Academy. There, as a seminarian and later lecturer while he completed his master’s degree and worked on Pillar and Ground, he wrote most of the essays presented in this collection.

The breadth of titles included in such a slim volume—“Superstition and Miracle,” “The Empyrean and the Empirical: A Dialogue,” “The Goal and Meaning of Progress,” “Questions of Religious Self-Knowledge,” among others—demonstrates a fundamental principle of the returning intelligentsia: namely, that Russia’s intellectuals did not check their brains at the door when they entered the church. From the moment of his conversion Florensky maintained an interior life centred on a living dialectic between the simple immediacy of the peasant piety which he so admired and the cultural, social, literary, philosophical, and scientific milieu which educated Russians inhabited alongside their Western European counterparts.

My sole but nevertheless major critique of Jakim’s presentation is contextual. From 1904 to 1909—all but the first year covered in this collection—Florensky was partnered with Sergei Troitsky, his roommate at the Academy, in what we now call a same-sex relationship. The significance of this for the present volume lies in Florensky’s emphasis, in Pillar and Ground, that this “friendship” provided the inspiration for his entire intellectual and literary activity. While we might forgive Florensky’s Russian editor and grandson, the priest-monk Andronik Trubachev, for his reluctance to acknowledge the nature of his grandfather’s friendship with Troitsky, Jakim’s failure to mention Troitsky at all in the three places where it would have been logical to do so in his introduction seems considerably more baffling.

Florensky’s speech to the philosophical circle of the Moscow Theological Academy in January 1906, “Dogmatism and Dogmatics” (pp. 119-38), begins with this dedication: “To my uniquely cherished friend, Sergey Semyonovich Troitsky.” Trubachev identifies Troitsky in a footnote as “perhaps [emphasis mine] Florensky’s closest friend. He was married to Florensky’s sister, Olga” (p. 119). Yet Troitsky did not enter into this unconsummated marriage until three years later. Just two weeks after Florensky delivered “Dogmatism and Dogmatics,” he spent part of a major church holyday writing a shockingly homoerotic love poem to Troitsky entitled “Two Knights.”

Their relationship resurfaces, if more implicitly, in “The Salt of the Earth” (pp. 164-222), Florensky’s tribute to their spiritual father, a priest-monk at Gethsemane Skete: “Whenever a pair of friends would come to see Father Isidore, he’d always express his joy and approval of their friendship” (p. 203). This is surely autobiographical. In dedicating Pillar and Ground six years later to the now deceased Troitsky, Florensky writes, “Nevertheless, with a kind of tranquil grief, I repeat before our cross, which you made from an ordinary stick and which our gentle Elder [Father Isidore] blessed, I repeat, ‘Lord! If Thou hadst been here, my Brother would not have died.’” In Florensky’s writings, a pair of friends signifies a male couple, such that each friend regards the other figuratively as his husband. What other kind of friendship would require a spiritual father’s “approval?”

I remain immeasurably indebted to Mr. Jakim in my own doctoral research. Yet one hopes that he will become more comfortable with this aspect of his subject’s life and personality.

This review will appear in the Spring 2018 issue of Toronto Journal of Theology.

Giacomo Sanfilippo is a PhD student in Theological Studies at Trinity College in the University of Toronto. He holds a BA in Sexuality Studies from York University and an MA in Theology from Regis College/St. Michael’s College. Earlier in life he completed the course requirements for the MDiv at St. Vladimir’s Orthodox Theological Seminary.