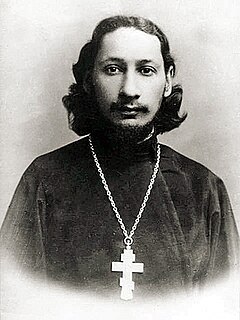 “What none of them knew positively but many felt instinctively was that, precisely for the more educated and this politically undesirable prisoners, Solovki was now a death camp. An order…required that STON be decreased by 1,200 people, all to be properly bureaucratically processed and done away with extraterritorially, as though they were simply being moved elsewhere. In the meantime, they were expendable. [A] letter of 19 September 1937 records a desperate shortage of food and money for the prison shop.

At the end of October 1937, this twilight existence came to an end. There was a hurried evacuation of more than a thousand men to the mainland. A witness recalls seeing Florensky…among the lines of four who were marched out to the Bay of Content. Weighed down with cases and rucksacks, they could only nod as they passed. They were conveyed to the so-called Workers’ Island where Florensky, with 12 others, was brought up before a troika, accused of counter-revolutionary Trotskyite propaganda and condemned to be shot.

On 25 November the condemned were moved near Leningrad, where they were delivered to a Major Frenkov, who carefully checked each one against his photograph. On 8 December Florensky’s turn came. He was shot with two others whose fate had had no previous connection with his own and the bodies tipped into a communal grave.

…[I]f this was martyrdom, it was the very twentieth-century, existential martyrdom of a sentient, living human being, ground down to silence and consigned to an anonymous grave.”

In honour and memory of Father Pavel click here to help us feed the homeless on Christmas.