Although Orthodoxy in Dialogue normally declines to publish anonymous articles, we make an occasional exception on the subject of sexuality and gender when an author feels the need to protect himself or herself from the kind of hatred that is far too often directed at us from ecclesiastical and ecclesial sources.

The climate of fear in which we live cannot be blamed solely on the Evangelical invasion of the Orthodox Church over the past 30+ years, although this has certainly played a substantial part in giving rise to a culture entirely foreign to the spirit of Orthodox Christianity. Father Thomas Hopko—in articles that still appear on the OCA website, and especially in his Christian Faith and Same Sex Attraction: Eastern Orthodox Reflections (2006)—was the first to call for the excommunication of Orthodox Christians for merely asking the questions and proposing the answers on sexuality and gender for which Orthodoxy in Dialogue has become the Orthodox Church’s principal voice.

The importance of the present article lies in its giving expression to a reality often overlooked by all sides in the Church’s debates on sexuality and gender: Christians who positively embrace their identity somewhere along the LGBTQ spectrum, some of whom have formed or seek to form a committed same-sex couple, and yet feel called to lifelong sexual abstinence. Orthodoxy in Dialogue addressed this issue more than two years ago in Gregg Webb’s Sexual Minorities in the Orthodox Church: Towards a Better Conversation. The present article restores these Christians to their rightful place in our ecclesial consciousness and discourse.

We can vouch that the “American LGBTQ Christian” who authored this article is well known to us. 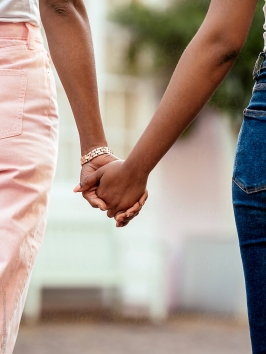 Let me begin by saying I appreciated Father Aaron Warwick’s opening a discussion in his Pastoring LGBTQ Individuals in the Orthodox Church. His article represents a beginning of a conversation, and certainly shouldn’t be taken as the only word to be said on the subject.

Father Warwick seemingly constructs the conversation about LGBTQ individuals relative to the curbing of lusts. He can scarcely be faulted for this approach. After all, Saint Paul takes a similar approach when he writes to the Corinthians:

Now concerning the matters about which you wrote: “It is well for a man not to touch a woman.” But because of cases of sexual immorality, each man should have his own wife and each woman her own husband. The husband should give to his wife her conjugal rights, and likewise the wife to her husband. For the wife does not have authority over her own body, but the husband does; likewise the husband does not have authority over his own body, but the wife does. Do not deprive one another except perhaps by agreement for a set time, to devote yourselves to prayer, and then come together again, so that Satan may not tempt you because of your lack of self-control. This I say by way of concession, not of command. I wish that all were as I myself am. But each has a particular gift from God, one having one kind and another a different kind.

To the unmarried and the widows I say that it is well for them to remain unmarried as I am. But if they are not practicing self-control, they should marry. For it is better to marry than to be aflame with passion. (1 Cor 7:1-9)

However, in framing the conversation in terms of the curbing of lusts, Father Warwick overlooked many elements of how the Orthodox Church supports people in either marriage or monasticism. Both marriage and monasticism are coupled with enormous support from the Church. There are the liturgical services, giving Orthodox Christians a vision of how and why marriage and monasticism are so important in the life of the Church. For married people, there is a constant willingness to engage in tough conversations about the practical considerations associated with cultivating a Christ-honoring marriage. There are any number of resources about how to live out one’s call to be a domestic church. Just consider the fact that there are books like Making God Real in the Orthodox Christian Home. There is so much more to marriage than providing an avenue for the curbing of lusts, and the Orthodox Church knows it.

Orthodoxy is, at its core, a faith grounded in prayer. Lex orandi, lex credendi is one of the few sentences I know in Latin. The prayers of the Church shape our beliefs, our way of life, and our outlook on the world as a whole. And there are precious few prayers made widely available with the express intention of supporting celibate vocations lived in the world.

It’s one thing to say that celibacy is the ideal for LGBTQ Christians. It’s another to attend to address concrete, practical concerns arising from the human need for authentic companionship on this journey called life.

Being pastoral involves helping people discern a life-giving, soul-filling vision of what is possible in their life with the assurance that the Church can, and will, walk with them along the way.

Editorial addendum: The lack of concrete pastoral and ecclesial support for adult Orthodox Christians struggling to live a life of non-monastic sexual abstinence is acutely felt not only by those who identify as LGBTQ. We have been contacted by a 40-something Orthodox man who identifies as straight, has not found a wife and has begun to wonder if he ever will, feels no call to a monastic vocation…and asks painfully where and what his place is in parish life which seems to be the exclusive domain of married people with children.

See the Warwick Files in our Archives 2020 for a catalogue of all articles written in response to Father Warwick.

See the Fifty Years after Stonewall and extensive Sexuality and Gender sections in our Archives.

Our Feed the Homeless on Christmas appeal has been extended to December 31.

Donate via PayPal using editors@orthodoxyindialogue.com as the recipient.

6 thoughts on “CONTINUING THE CONVERSATION: A RESPONSE TO FATHER AARON WARWICK by an American LGBTQ Christian”