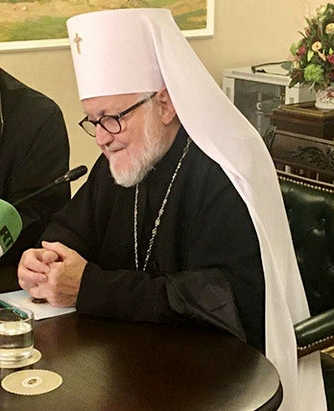 As Orthodoxy in Dialogue reported previously, subsequent to the self-inflicted disaster of the Ecumenical Patriarchate’s incomprehensible decision of November 2018 to dissolve its Exarchate of Russian Parishes in Western Europe, and to absorb these parishes into the Phanar’s existing Greek metropolises, Archbishop John (Renneteau) and the parishes willing to follow him were received into the increasingly schismatic Moscow Patriarchate.

Renneteau was rewarded with the white klobuk (hat and veil) of a Russian metropolitan—an episcopal rank higher than archbishop in the tradition of the Moscow Patriarchate—and styled Metropolitan of Dubna. Dubna is an artificial “science-town” (наукоград, naukograd) of 72,000 inhabitants, founded in 1956 on the banks of the Volga 78 miles (125 kilometres) north of Moscow. It is unclear to us whether Dubna ever was, or has been recently designated, a diocesan see, and whether Metropolitan John has a cathedral and residence there, and any sort of actual administrative and pastoral duties in Dubna and its environs. (One suspects not.)

According to the website of the former exarchate, it continues to be called the Archdiocese of Russian Orthodox Churches in Western Europe, with the substitution of Moscow Patriarchate for Ecumenical Patriarchate.

The Greek original and the English translation have a screenshot listing the metochion as an institution of Metropolitan John’s Archdiocese of Western Europe. Today, using several keywords in the site’s internal search engine, we are unable to find it in the directory, or Annuaire > Monastères et Paroisses, shown in the screenshot. In fact, Google lists a page for the metochion here, but the link takes one to page inconnue—unknown page.

A metochion (μετόχιον or μετόχι in Greek, подворье in Russian, sometimes rendered representation church in English) functions as a kind of ecclesiastical embassy of one autocephalous church on the territory of another. Those familiar with the troubling ties that bind the Orthodox Church in America to the Moscow Patriarchate will recall the OCA’s representation church in Moscow, St. Catherine the Great Martyr. Its designation as a stavropegial institution means that it falls under the direct jurisdiction of the OCA Primate rather than a diocesan bishop of the OCA or a hierarch of the Russian Church.

Obviously, a metochion can only be established with the express invitation and ongoing consent of the primate of the autocephalous church on whose canonical territory it is located. This is why Loudaros’ report characterizes the new Russian “metochion” in Greece as an “invasion.” A properly constituted Russian metochion would have been founded at the invitation of the Archbishop of Athens on property and in a parish church provided by the Church of Greece to the Church of Russia for that purpose.

However, the Moscow Patriarchate has recently broken communion with the Church of Greece over the latter’s recognition of Ukrainian autocephaly….

Addendum 12/18/19: See today’s Russian Backtracking in Relation to Aspropyrgos “Metochion” in Attica at Orthodox Times. Yet the fact remains that the Moscow Patriarchate seemed prepared to establish an uncanonical “metochion” on the territory of the Church of Greece.

One thought on “RENNETEAU BRINGS MUSCOVITE SCHISM TO GREECE”