The following report appeared on December 17, 2019 at Orthodox Christianity. We share it with Orthodoxy in Dialogue’s readers for purposes of information and discussion, with the following caveats: Orthodox Christianity’s content is reliably pro-Moscow Patriarchate, anti-Ecumenical Patriarchate, anti-Orthodox Church of Ukraine, and anti-Orthodoxy in Dialogue/Public Orthodoxy/The Wheel; we cannot confirm this report’s accuracy or lack thereof, in whole or in part; and finally—like it or not—state involvement in ecclesiastical affairs is as old as the Edict of Milan and the First Ecumenical Council. Proceed to read the following circumspectly. Ask questions before forming an opinion. The Orthodox Times outlet began as the English edition of the widely-read Greek Orthodox outlet Romfea in late December last year, with its official launch in January of this year, with the backing of the U.S. government.

In February, the outlet reported that U.S. Ambassador to Greece Geoffrey Pyatt met with its editorial team, after which the Ambassador tweeted: “Enjoyed meeting the @RomfeaNews team. We are excited @StateDept provided support for the launch of this meaningful effort to strengthen the free press, fight disinformation, & highlight the values we share with Orthodoxy and the Ecumenical Patriarch.”

Enjoyed meeting the @RomfeaNews team. We are excited @StateDept provided support for the launch of this meaningful effort to strengthen the free press, fight disinformation, & highlight the values we share with Orthodoxy and the Ecumenical Patriarch. Καλή αρχή! 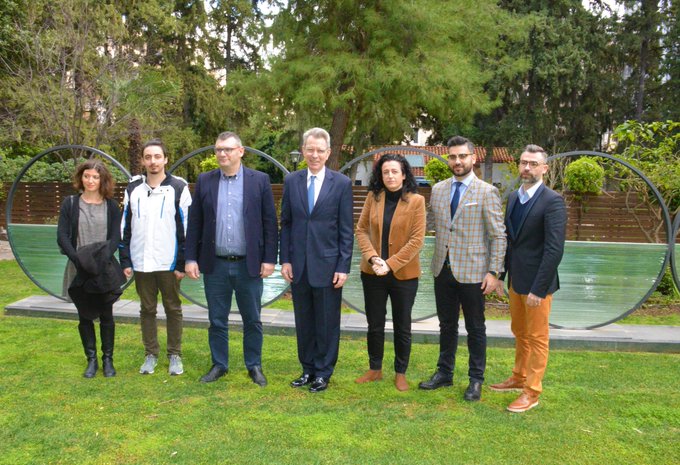 According to the official U.S. government website USASPENDING.gov, this support came in the form of a $100,000 grant.

The grant covered the period of October 1, 2018 to October 31, 2019, and was awarded “TO COUNTER ENTITIES SPREADING FAKE NEWS & MISGUIDING BELIEVERS IN ORTHODOX COMMUNITIES BY MONITORING MEDIA & EXPANDING REACH OF NEWS PORTAL ROMFEA.GR.” The administrative agency for the grant is the Bureau of European and Eurasian Affairs of the State Department, and falls under the category “19.878: EUR-OTHER,” whose “primary goal is to promote democratic and free market transitions in the former communist countries of Central and Eastern Europe and Eurasia, enabling them to overcome their past and become reliable, productive members of the Euro-Atlantic community of Western democracies.”

The U.S. State Department has also been open about its support for Patriarch Bartholomew’s creation of the “Orthodox Church of Ukraine,” and “Metropolitan” Epiphany Dumenko personally thanked Secretary of State Mike Pompeo for the U.S.’s support in the creation of the OCU.

Although the period of the grant ended on October 31, 2019, World Media Orthodox Network Private Company also has an entry on the government “System for Award Management” website showing that the company is registered from 6/14/2019 to 6/12/2020, with its purpose of registration listed as “Federal Assistance Awards Only.” As OrthoChristian was recently informed by the Orthodox Times editor, the site no longer has a connection to Romfea.

Ambassador Pyatt is a well-known anti-Russian agitator. Having previously served as Ambassador to Ukraine, he was instrumental in organizing 2014’s Maidan revolution. As Ambassador to Greece, he has continued such activities, meeting with prominent figures in the Greek Orthodox world, including Patriarch Bartholomew several times, Metropolitan Hierotheos (Vlachos), Abbot Ephraim of Vatopaidi Monastery on Mt. Athos, and Archbishop Ieronymos.

He has been described as a “Russian hate figure,” and has openly accused the Russian Church of attempting to undermine the role of the Patriarch of Constantinople.