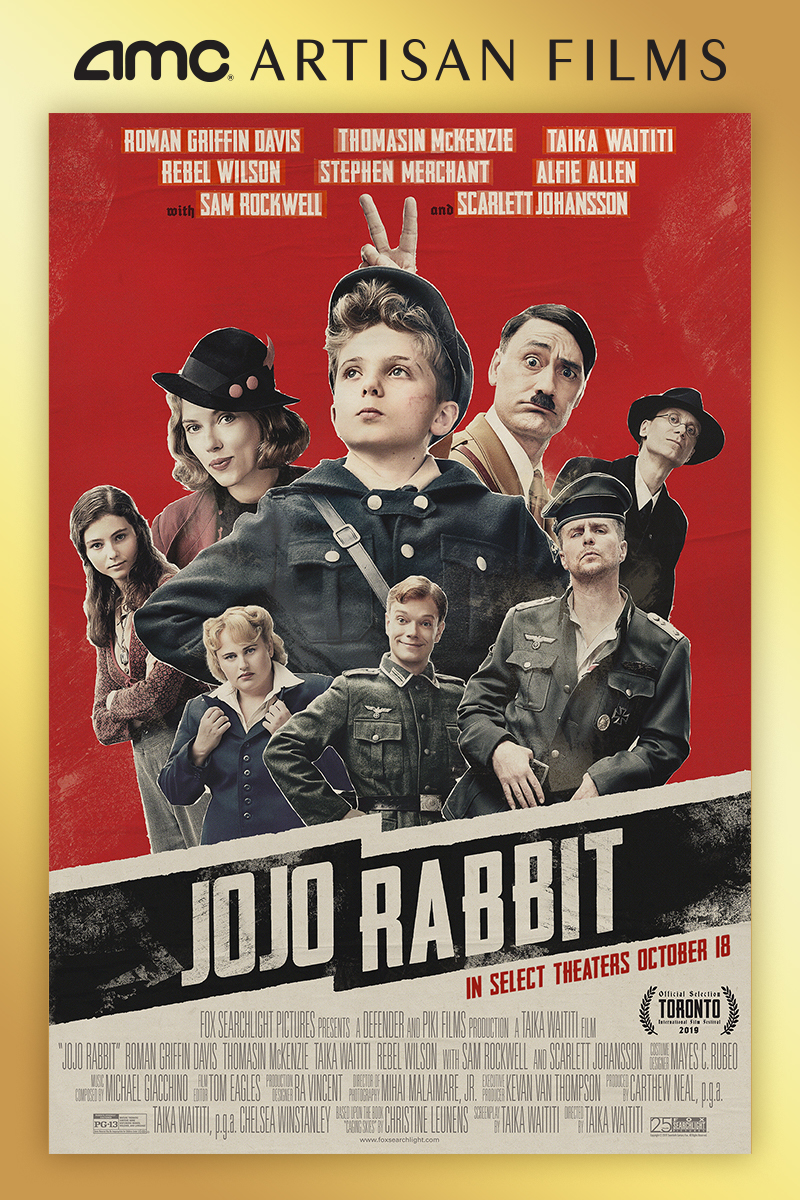 I just had the privilege of seeing a film called Jojo Rabbit by Taika Waititi. Based on Christine Leunens’ novel, Caging Skies (The Overlook Press, 2004), the film looks at the absurdity of war through a child’s perspective. While broad themes in the movie include friendship, trust, and the loss of childhood innocence, Orthodox audiences may find particular resonance in other themes: the nature of obedience and obligation, white supremacy, and the oppressive consequences of mob mentality. If readers are familiar with an earlier Waititi film, Boy, there are some recognizable motifs between the two, particularly in the way that a child’s perspective is imagined and portrayed. Waititi’s style is not unlike that of Wes Anderson in his deliberate uses of color and artistic framing.

The movie follows 10-year old Jojo, a new initiate of Hitlerjugend, the Nazi version of Boy Scouts. The blurry lines of war are introduced early in the film when it becomes clear that Jojo’s enthusiasm for the group is not enough to protect him from bullying from older youth. The inconsistencies of the protagonist’s life deepen when he realizes that his own mother (played by an energetic Scarlett Johansson) is hiding a Jewish girl in their home. Jojo is torn between deep curiosity about her and the propaganda he has been hearing. We see his inner conflict personified by an imaginary friend—a cartoonish version of Adolf Hitler played expertly by Taika Waititi himself. It is important that this character is Jojo’s own creation more than the actual dictator (he eats a unicorn steak at one point).

Admittedly, the humor is irreverent, and it may not be to everyone’s taste. An early scene in the movie is both shocking and strangely cute when little Jojo eagerly runs out of the house in his knee-high socks and shorts, greeting every passerby with a chipper “Heil Hitler!” However, a crucial aspect of this film is the innocence of Jojo’s perspective on the world. He is an ardent follower of Nazi propaganda, but it does not take long for him to realize that it does not hold up when he meets Elsa, an actual Jewish person. As a fellow boy remarks, “How would we know when we see them? They look just like us.” For one thing, Jojo has been taught that “Aryan” people are physically stronger than people of other ethnic backgrounds. Elsa is easily able to put him in a headlock and frequently outwits him.

Yet in spite of his involvement with the Hitlerjugend, Elsa sees through Jojo’s exterior to a soft heart. In one poignant scene, she says, “You’re not a Nazi, Jojo. You’re a 10-year old kid who likes dressing up in a funny uniform and wants to be part of a club.” This quote touches on many themes—dangerous group pressure to belong, that true friends remind you of your humanity, and that it is a courageous act to trust the Other. I could not help but think about our current political climate and the insidious reaches of white supremacy, from the White House to corners of the Orthodox Church. What does it take for someone convinced of their own invincibility to be reminded that they are as fallible and mortal as the person they hate? What courage does it take to stand up to our enemies, but more so to our friends, in the words of Albus Dumbledore? How many Others—including immigrants, the LGBTQ+ community, an opposite political party, or someone of another color than ourselves—do we build propaganda around? There are no winners in war, and there are no winners in hate. We live in an era of endless finger-pointing and not enough introspection.

Jojo Rabbit gives us glimpses into how the Nazi party oppressed its own members as much as those outside it. One of Jojo’s early tormentors is eager to be drafted to war, but we see him return silently with a bloody bandage around his head. War was not what he believed it would be. Captain Klezendorf, a camp counselor and mentor to Jojo (played with nuance by Sam Rockwell), is implied to be closeted. Inequalities between the boy and girl campers early in the film are treated with pointed humor when the boys are told they will learn many cool battle tactics, and the girls are told they will learn to mend wounds, make beds, and get pregnant.

I found this movie incredibly timely and deeply moving. Children who experienced the violence of WWII may have had more in common than we’d like to think with the children of today, who must make sense of school shootings and hate crimes. This movie left me with messages of hope and redemption, however. There is hope on the other side of anger and despair, but there is a journey to get there. Mistaken ideology does not need to be a permanent life choice. Forgiveness is possible if we have the courage to ask for it. Perhaps there is no more Orthodox message than that.

See the Faith & the Arts section in our Archives and the call for articles for this series.

Lydia Bringerud holds a PhD in folklore from Memorial University of Newfoundland in St. John’s and an MA in folklore from Indiana University in Bloomington. Her doctoral research focused primarily on American converts to Eastern Orthodox Christianity, as well as attitudes toward authority, obedience, cultural conflict, and the position of women. She has written previously for Orthodoxy in Dialogue. She currently works at a public library in San Diego CA.