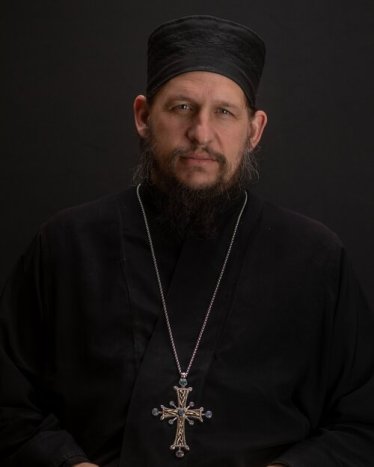 When Orthodoxy in Dialogue sees a sudden, unexplained uptick in traffic to a past article that had receded in the collective consciousness of our readers, we make inquiries to discover why the subject of the article has recaptured the interest of the Orthonet. Usually, we can determine quickly enough the reason for the renewed attention.

Such is the case currently with Father Peter Heers. On June 9, 2020, we published Archbishop Alexander (Golitizin) [of the OCA] Issues Warning against Father Peter Heers’ “Orthodox Ethos” Website. Over the past two or three days, this article from two and a half years ago catapulted to the top of our daily trending list in the lower right column on this page. When we questioned this in Orthodoxy in Dialogue’s Facebook group, a scholar who chimes in from time to time responded that Heers’ canonical status was being questioned in a Twitter thread launched by a priest. This compelled us to cull the internet for what we could find. As our readers around the planet have come to expect of Orthodoxy in Dialogue, our mandate has evolved to include reporting on, and often advocating for canonical action against, wayward hierarchs and priests in the Orthodox Church. Even our most vocal detractors have learned from the outcome of the Metropolitan Joseph Scandal that we do our due diligence when reporting on such matters.

Nowhere have we found Father Heers providing the information that any honest, trustworthy priest with nothing to hide can give in under fifteen seconds: his bishop, diocese, jurisdiction, and assignment. It’s not even clear where he resides. The most we have been able to find is him trying to “prove” his canonicity by posting photos of himself with one or another hierarch of one or another jurisdiction in one or another liturgical or non-liturgical context.

The 2-sentence bio for The Orthodox Ethos Team gives “the Phoenix [Arizona] Metropolitan Area” as Heers’ current place of residence, but no ecclesiastical affiliation.

The About page for the the so-called St. Kosmas Orthodox Christian  Education Association (which focuses on homeschooling) lists no present ecclesiastical affiliation but shows a photo of him serving with the now reposed Metropolitan Hilarion and the newly elected Metropolitan Nicholas of ROCOR and a third hierarch whom we have not identified. This same incomplete bio appears on the faculty page at ROCOR’s Holy Trinity Seminary in Jordanville NY, where Heers is listed as a lecturer in ecclesiology, former lecturer in dogmatic theology, and former assistant professor of Holy Scripture.

Heers’ publishing house, Uncut Mountain Press (against which we recommended a boycott on August 17 of this year), offers a similarly incomplete narrative, again with no clue to his current ecclesiastical affiliation. It shows a brief stint as headmaster at Three Hierarchs Academy in Florence AZ, a private K-7 school which appears to be under no discernible, even nominal episcopal oversight.

The Substack blog Theoria: Orthodox Christian Faith and Culture brought matters to a head two days ago, November 17, with the publication of Fr. Peter Heers, Orthodox Ethos, and the Sectarian Mindset: A Word of Caution, in which the author treats in much greater detail the questions, concerns, and suspicions that we raise above. The article characterizes Heers as the unofficial “new leader of the internet Church.” It goes on to say:

The next phase of Heers’ career as a priest and academic would give rise to many questions, including his geographical location, canonical status, and ruling bishop. Shortly after his release from Holy Prophet Elias in Petrokerasa in Greece (reason: unknown) he began teaching full-time at ROCOR’s Jordanville Seminary….

All we know of Fr. Peter’s most recent endeavors is that he teaches part-time as a lecturer in dogmatics at Jordanville for their certificate program, spends time writing for his blog, running his publishing company, making video content, and producing his podcast, “The Orthodox Ethos” (announced April 1, 2020). [The strangeness of Heers’ positions at the ROCOR seminary becomes clear below.]

Any priest that refuses to disclose his bishop is by consequence regarded with suspicion. While Fr. Peter has publicly evaded the bishop question on several occasions, he updated his website in 2021 to include his attachment to the Jordanville Monastery as clergy under the eastern diocese of ROCOR. On August 15, 2021, the Jordanville monastery confirmed his attachment through an email exchange….

There are several suspicious aspects here: 1. That Heers was supposedly living in Greece while attached to a ROCOR monastery in upstate New York 2. That Heers is known for frequently switching bishops. 3. That no one can trace Heers’ frequent movement or the reason for his transfer. 4. To this day, it appears that Heers has not acted as parish rector since his departure from Holy Prophet Elias in 2017. Such a record should not inspire confidence in Heers as a leader or teacher.

Yet, without the duties of an acting rector or a full-time professor, Fr. Peter found new time to pour into his online undertakings.—an enterprise that would allow him the financial freedom to spend as much time as he’d like in personal research and teaching online to the faceless masses. Within the first year (2020), he gained over 1,000 paid patrons netting somewhere between $3,000–$3,500 monthly (a conservative estimate) from Patreon.com alone.

Undated but “2 days ago” and “Updated: 1 day ago,” Heers himself posted a response to the doubts swirling around his legitimacy as a canonical priest, entitled A Statement from Archpriest Peter Heers. He writes, as evasively as ever (and mendaciously, this time?),

To Whom It May Concern:

Recently I was blessed to visit Nashville, TN and I asked Met. Nicholas of New York for a blessing to serve at the ROCOR parish in Lebanon, which he immediately and graciously extended, for I am a priest in good standing, not under any church discipline. For the same reasons, I was blessed to serve with His Grace Bishop Luke while visiting Holy Trinity Monastery in Jordanville for the feast of the Holy Protection. (And, for the same reasons, I was blessed by Bishop Longin to serve at St. Savas Monastery in Chicago a few weeks earlier, and at the St. Petka parish in Nashville earlier this year.) In 2021 I was received into ROCOR by Metropolitan Hilarion of New York (of blessed memory) and assigned to the clergy of Holy Trinity Monastery, being a lecturer at Holy Trinity Seminary in the certificate program. Sometime later, due to an irregularity with regard to my release and reception, the Holy Synod suggested that I find a way to re-regularize my position. As is clear from the above (and below), I have been blessed (by several Hierarchs) to concelebrate and serve while this process takes place.

In Christ,
Archpriest Peter A. Heers

As we have seen on other online platforms, Heers tries to buttress his questionable claims with photos of himself and hierarchs from various jurisdictions. In two photos and one video, he seems to be on excellent terms with Metropolitan Neophytos of Morphou—known to our readers for his teaching that women who enjoy anal intercourse during pregnancy give birth to gay baby boys. Great company, Father Peter. Even our readers who loathe Orthodoxy in Dialogue the most for our theological, spiritual, pastoral, social, and political approach to sexual and gender diversity recognize the insanity of Neophytos’ “teaching.” (Our readers will also recall the sober response of Metropolitan Nathanael of the Greek Orthodox Archdiocese to Metropolitan Neophytos.)

Heers’ claim that he “was received into ROCOR by Metropolitan Hilarion of New York (of blessed memory) and assigned to the clergy of Holy Trinity Monastery” and that “later, due to an irregularity with regard to my release and reception, the Holy Synod suggested that I find a way to re-regularize my position,” smacks of an outright lie. Metropolitan Nicholas of ROCOR instructed his secretary to issue the following statement yesterday, November 18: 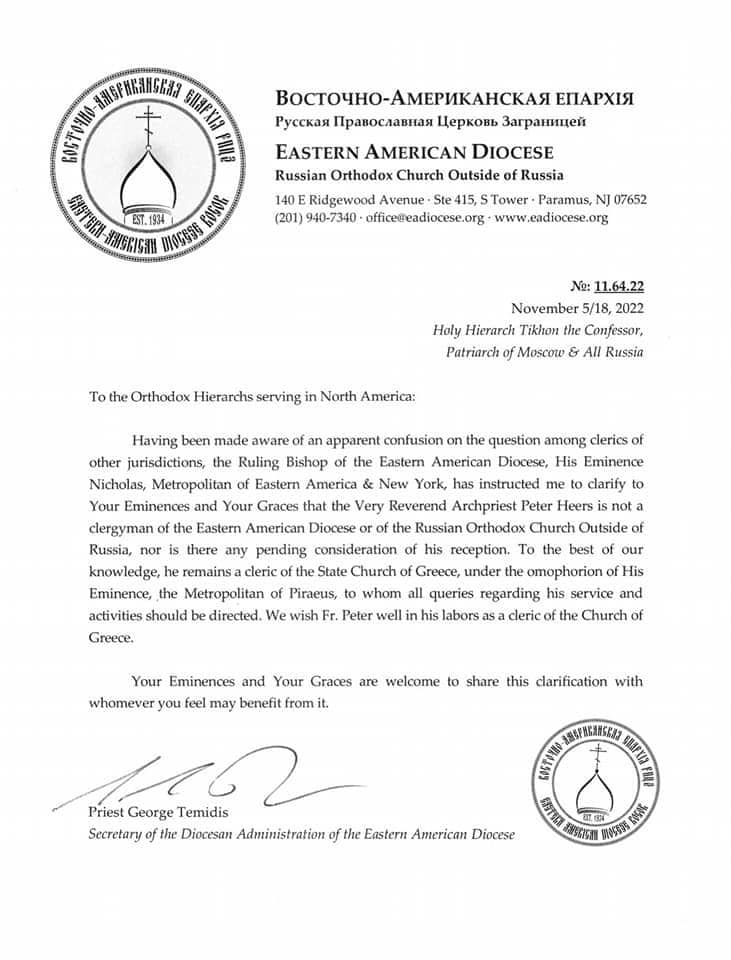 It does seem extremely unusual that ROCOR should hire a priest to teach at its main seminary about whose canonical status the Metropolitan’s office can proffer no better than “to the best of our knowledge.” Also, how does ROCOR circumvent the Moscow Patriarchate’s ban on concelebration with hierarchs and priests of jurisdictions that recognize the autocephalous Orthodox Church of Ukraine, as does the Church of Greece? Will Heers’ connection with the seminary be terminated now that he has lied openly about his affiliation with ROCOR?

Even the fans of Heers-style Orthodox rigourism—or especially such fans, perhaps—must recognize the importance of proper canonical order. All concerned Orthodox must join together to demand of Heers a simple, easily verifiable answer to a simple question: Who is your bishop?

Orthodoxy in Dialogue wishes our readers around the world a blessed and spiritually fruitful Nativity Fast.