Editor’s Note: John Boswell’s seriously flawed scholarship on the liturgy of brother-making (addressed in Giacomo Sanfilippo’s A Bed Undefiled: A Partial Retraction) creates obstacles for subsequent treatments of the topic to receive an impartial reception from an Orthodox audience. Yet brother-making studies originated not with Boswell, but some hundred years earlier with Orthodox scholars in Russia. (See Pavel Florensky’s 1914 The Pillar and Ground of the Truth, trans. Boris Jakim, p. 571, n. 809 for a partial but extensive bibliography.) Florensky himself regarded brother-making as a sacrament and took for granted that it constituted the Orthodox Church’s rite for sanctifying modern same-sex relationships that resemble marriage in all respects but procreation. (See Sanfilippo’s Father Pavel Florensky and the Sacrament of Love in The Wheel, which introduces his doctoral research on the subject.) We offer Dr. Masterson’s brief essay for discussion and debate in our ongoing dialogue on the possible place of same-sex love in a life transfigured in Christ through the Holy Spirit in the sacramental economy of the Church. 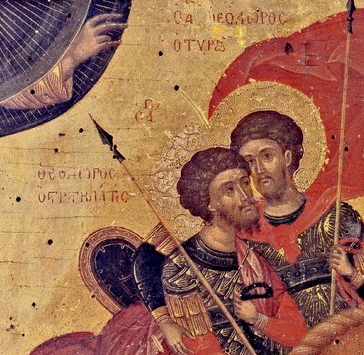 You might think same-sex marriage is something completely new. You would be mostly right, but history has other things to show us. History is not as familiar as we sometimes think it is.

First, how did men become spiritual brothers? In church two men would be blessed by a priest who would say a prayer over them. Many of these prayers survive and more are being located all the time. Spiritual brotherhood was popular.

Here is a portion of a prayer from the 800s:

… these your servants who love one another with spiritual love have come to your holy church to be blessed by you: grant them faith without shame, love without suspicion. (Rapp, pg. 294)

After this blessing from the priest, the men were brothers for life. The Orthodox Church and Byzantine writers on law were nervous about the rite. There were questions about men’s motives for entering into these spiritual brotherhoods. Was it for sex with each other, easy access to each others’ households and women, or for criminal purposes (see Rapp, pg. 235)?

Experts have been divided about the question of sex between brothers joined in the rite. While there is not a lot of evidence and the rite was clearly not meant to allow men to have sex with each other, there is enough evidence to suggest that Byzantines thought affection and sexual feelings were possible.

It was well known that Emperor Basil I (mid-800s), who rose to the throne from modest circumstances, had a series of spiritual brotherhoods that were advantageous for him. The Byzantine historians writing in the mid-900s are not shy about noting that his good looks caught other men’s eyes:

Having gazed upon him, Theophilitzes [a member of the imperial court who was going to enrol Basil in his circle momentarily] desired Basil. (Pseudo-Symeon, Chronographia 656/11)

[Emperor Michael] was loving [Basil], gazing upon those [physical] qualities of his that surpassed all the others. (Anon., Life of Basil 13)

In the case of his first brotherhood, after Basil and the other man got back from the church, they “rejoiced in one another.” It is what it sounds like, especially as this rejoicing recalls Proverbs 5:18: “Rejoice in the wife of your youth.”

Prior to becoming emperor, Basil joined himself as brother to John who was the son of the fabulously rich widow, Danelis. This was Danelis’ idea. Basil benefited from Danelis’ resources and she later benefited from having her son associated with the emperor.

Later when Basil was emperor, Danelis visited the imperial court and was treated with great honour including being called “mother of the emperor.”

But that is not all. Just as we see in the histories, surviving letters that men wrote to each other show a culture of great warmth between men. The old language of male love that goes back to the ancient Greeks was used constantly. A handsome physique could inspire male desire.

St. Mary, who lived in the 800s, had a son, Vaanes. Vaanes, a soldier, was loved by the other soldiers. He was also particularly close to his friend Theodoros:

Vaanes had a certain Theodoros as … helper in all his excellent exploits … a man brave and strong in military matters but braver still in conducting his life for God. Yoked to him, like a bull of good lineage and strong, they were plowing in one another as though into rich farmland, and they were sowing the seeds of excellence, as though the best of farmers. (Life of St. Mary the Younger, pg. 279)

But it is not only Mary’s son. Her husband Nikephoros had a close relation with another man, named Vardas.

Vardas was married to Mary’s sister and he suggested to his friend Nikephoros that he marry Mary. A marriage connection would bring them closer together:

Since, O dearest of men to me, we have become deeply involved with each other and are bound by our intimate relationship. I think it right to make this, our bond of love, stronger and more perfect and to apply the ties of kinship to it, so that we may be joined in two ways, forging a family connection along with our intimate relationship. (Life of St. Mary the Younger, pg. 256)

When Vardas describes their relationship as intimate, again it is what it sounds like. If you ask, “Intimate how?” you are asking the right question.

They could be and sometimes were

The takeaway is that two generations of men in the life of a saint had strong relationships with other men. The anonymous writer is not shy about making us think about sex either.

I also think it likely the writer of Mary’s life is signalling that these men were spiritual brothers as well as saying they were intimate with one another, just as Emperor Basil I was with his first brother.

This article appeared originally on August 30, 2017 at The Conversation and is reprinted here in collaboration with the author.

See the Bridging Voices, Fifty Years after Stonewall, and extensive Sexuality and Gender sections in our Archives. Especially relevant to the above article is Kevin Elphick’s review of Claudia Rapp’s Brother-Making in Late Antiquity and Byzantium: Monks, Laymen, and Christian Ritual  and Giacomo Sanfilippo’s From the Fathers: The Kingdom of Heaven Is Like…Two Men in Bed Together?

Mark Masterson holds a PhD in Classics from the University of Southern California in Los Angeles and is Senior Lecturer of Classics at Victoria University of Wellington, New Zealand. His major research interest is same-sex desire between men in classical antiquity and now medieval Byzantium. He has published Man to Man: Desire, Homosociality, and Authority in Late-Roman Manhood and was one of three editors of Sex in Antiquity: Exploring Gender and Sexuality in the Ancient World. He is currently working on Between Byzantine Men: Desire, Brotherhood, and Male Culture in the Medieval Empire, to be published by Routledge in early 2021.

2 thoughts on “A BYZANTINE ANCESTOR TO SAME-SEX MARRIAGE? by Mark Masterson”