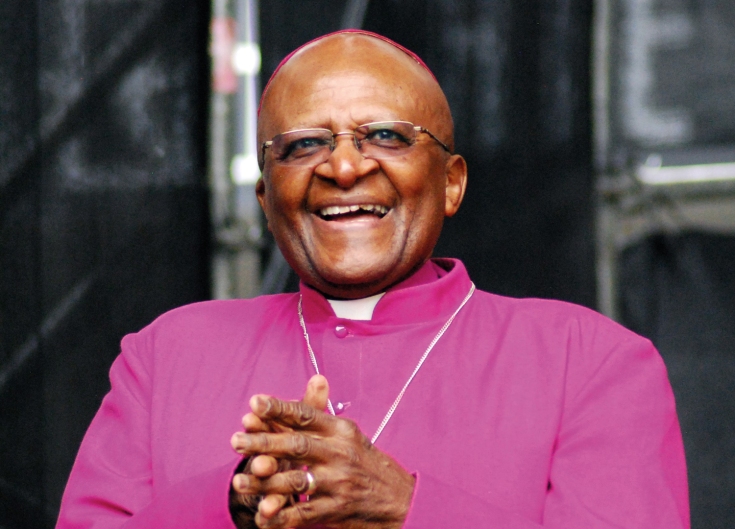 I never had the privilege of meeting Archbishop Desmond Tutu face to face, yet he was very much a part of my life while I was growing up in a South Africa characterized by apartheid and even after the fall of that deplorable system.

I remember how, as a child, I would watch scenes of rioting on the news programme, the clashes between demonstrators and the security forces, frightening scenes particularly for a child. And there in the thick of the clash one could discern a man in a cassock trying to come between the two sides, urging calm and sobriety. It was not that he disagreed with the demonstrators and their expression of absolute frustration and anger. It was not that he collaborated with the oppressors, as some of his own people had chosen to do. It was that he had chosen the path of nonviolence.

Like the prophets of old, he condemned injustice, not mincing his words but rather calling “a spade a spade.” If one was neutral in situations of injustice, one had chosen the side of the oppressor. “When missionaries came to Africa, they had the Bible and we had the land. They said, ‘Let us pray,’ and we closed our eyes. When we opened them, we had the Bible, and they had the land.” To this statement he added, “If you want to keep people subjugated, the last thing you place in their hands is a Bible. There’s nothing more radical, nothing more revolutionary, nothing more subversive against injustice and oppression than the Bible.”

Subsequently, he called people to repentance, preaching that the policy of apartheid was as dehumanizing to the oppressors as it was to the oppressed. While urging for sanctions from abroad, at home he stood against looming violence and sought to bridge the chasm between Black and White. While he decried the system, his talk of nonviolence made white South Africans “more comfortable,” less fearful of a future in which Blacks would rule. That was probably why he was occasionally featured on the news on the state-controlled TV, while other resistance leaders were censored.

He was the cleric who used his pulpit and spirited oratory to help bring down apartheid in South Africa, and then became the leading advocate of peaceful reconciliation under Black majority rule. As leader of the South African Council of Churches and later as Anglican Archbishop of Cape Town, Archbishop Tutu led the church to the forefront of Black South Africans’ decades-long struggle for freedom. His voice was a powerful force for nonviolence in the anti-apartheid movement, earning him a Nobel Peace Prize in 1984.

When that movement triumphed in the early 1990s, he prodded the country toward a new relationship between its White and Black citizens, and, as chairman of the Truth and Reconciliation Commission, he gathered testimony documenting the viciousness of apartheid.

“You are overwhelmed by the extent of evil,” he said. But, he added, it was necessary to open the wound to cleanse it. In return for an honest accounting of past crimes, the committee offered amnesty, establishing what Archbishop Tutu called the principle of restorative—rather than retributive—justice. “Forgiveness,” he said, “does not mean condoning what has been done. Forgiving means abandoning your right to pay back the perpetrator in his own coin.”

Bringing people together is what was for him ubuntu—the African sense of belonging—”I am because we are.” He believed that far too often people see themselves as individuals, separated from one another, whereas we are all connected and what we do affects the whole world. When we do well, it spreads out and affects the whole of humanity. “My humanity is bound up in yours and we can only be human together.” Differences are not intended to separate, to alienate. We are different precisely in order to realize our need for one another. “We are made for love. Without love we will be like plants without water.” “I can’t for the life of me imagine that God will say: ‘I will punish you because you are black, you should have been white; I will punish you because you are a woman, you should have been a man; I will punish you because you are homosexual, you ought to have been heterosexual.’ I can’t for the life of me believe that is how God sees things.”

Archbishop Tutu was outspoken on other cases of injustice and what he saw as human rights violations. The LGBTQ+ cause was particularly dear to him. “I would refuse to go to a homophobic heaven…I would not worship a God who is homophobic, and that is how deeply I feel about this. I am as passionate about this campaign as I ever was about apartheid. For me it is at the same level.” His stance gave the LGBTQ+ people of this country a new dignity, the feeling of self-worth, that their relationships were real and true, the possibility that they too were loved by God and accepted by His ministers. By some of them, anyway.

But as much as he had inveighed against the apartheid-era leadership, he displayed equal disapproval of leading figures in the dominant African National Congress, which came to power under Nelson Mandela in the first fully democratic elections in 1994. In 2011, as critics accused the A.N.C. of corruption and mismanagement, Archbishop Tutu again assailed the government, this time in terms that would have once been unimaginable. “This government, our government, is worse than the apartheid government,” he said, “because at least you were expecting it with the apartheid government.”

Archbishop Desmond Mpilo Tutu died on December 26, 2021, and the Dalai Lama is quoted to have said, “We have lost a great man who lived a truly meaningful life.” In his characteristic manner, the Archbishop himself had at one time said, “I give great thanks to God that he has created a Dalai Lama. Do you really think as some have argued, that God will be saying: ‘You know that guy, the Dalai Lama, is not bad but what a pity he is not a Christian’? I don’t think that is the case—because, you see, God is not a Christian.”

Desmond Tutu scandalized. “We may be surprised by the people we find in heaven. God has a soft spot for sinners. His standards are quite low.”  He was that little pebble in our shoe that just wouldn’t let us become “too comfortable” with injustice, with our own self-interests, our complacency. Desmond Tutu was our alarm clock, our conscience. President Cyril Ramaphosa has called the Archbishop “a leader of principle and pragmatism who gave meaning to the biblical insight that faith without works is dead.” God will count him among the blessed.

Rest in peace, your Eminence. We are made poorer by your loss. May your prophetic role and legacy of nonviolence, justice, reconciliation, accountability, and the human dignity of all live on.

Metropolitan Petros (Parginos) is the ruling hierarch for the Metropolis of Accra, Ghana in the Greek Orthodox Patriarchate of Alexandria and All Africa, and the founder/administrator of St. Mark’s Academy in Johannesburg, South Africa. He holds a PhD from the University of the North West focusing on Orthodox-Catholic dialogue. His Eminence has written previously for Orthodoxy in Dialogue.

Click here for information on how to support Orthodoxy in Dialogue as a Patron.

2 thoughts on “LIKE A PROPHET OF OLD: ARCHBISHOP DESMOND MPILO TUTU by Metropolitan Petros (Parginos) of Accra”