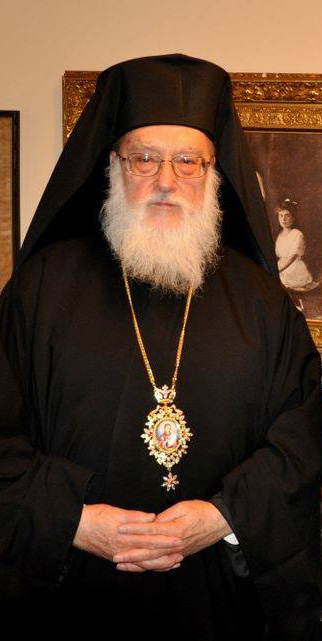 Grant rest eternal in blessed repose, O Lord, to the soul of Thy servant who has fallen asleep

and may his memory be eternal.

Readers who wish to leave a few words or lines of tribute may write to us at editors@orthodoxyindialogue.com. Include your name and city and state/province/country of residence. We will add them below as we receive them.

I read The Orthodox Church and The Orthodox Way by Metropolitan Kallistos in the early 1990s. His writings really introduced me to Orthodoxy. I was one of a countless number of people who were led by his writings to convert to Orthodoxy. (I was chrismated in the mid 90s.) I was also blessed to meet and have a brief yet memorable and profound conversation with him during a conference at Hellenic College/Holy Cross in Boston.

I’m an Anglican who considered converting to Orthodoxy but didn’t. Metropolitan Kallistos was an Anglican who did convert, so there’s a kind of inverse resonance there. My impression of him has always been that if you want to learn more about Orthodoxy, you can’t go wrong reading his books and articles or listening to his lectures. I especially like The Power of the Name, the best single thing on the Jesus Prayer that I’ve read so far. His article “Dare We Hope that All Will Be Saved?” was a big nudge on my road to universalism. Then of course there is his editing/translation of vols. 1-4 of the Philokalia. I had the great privilege of hearing him speak in person on the Jesus Prayer several decades ago at St. Sophia’s Cathedral in Los Angeles. I will miss him, but he and his legacy will live forever.

As I’m sure many worldwide have experienced in their own life, Metropolitan Kallistos’ writings were some of the first Orthodox literature I was ever exposed to. As a result, The Orthodox Church has benefited me as I’ve tried identifying what Christianity means to me and who I say Jesus is.

While I am not Orthodox (yet), God willing, I shall make that step, and I will count Kallistos Ware as one of the many guides and mentors of the faith who held my hand (whether they knew it or not) through dark paths and helped lead me into the open air.

While I was raised Catholic in a half-Orthodox family (my maternal grandfather was an Orthodox priest in the United States), Metropolitan Kallistos’ The Orthodox Church was one of the first formal presentations of the Orthodox faith that I had ever read when I was 20 years old in 1975. (The other two were Schmemann’s For the Life of the World and Bloom’s Beginning to Pray.) My reaction to Ware’s book was an immediate I’ve been Orthodox all my life without knowing it! Six months later, on Pascha 1976, I was received formally into the Church through Holy Chrismation.

In the late 1980s I attended His Eminence’s public debate with Father Hopko on a point of christology at St. Vladimir’s Seminary. Ware demonstrated point by point where Hopko was wrong—but with such kindness and gentleness that Hopko was not publicly humiliated at all. This has served as a model for how I attempt to engage with those who disagree with me theologically within and outside of the Orthodox Church.

The highlight of my academic career came when Metropolitan Kallistos wrote a brief word of praise for my work with Father Pavel Florensky in The Wheel. His willingness to keep a pastorally and theologically open mind on issues of sexuality and gender has been a burst of sunshine on a bleak landscape for those of us Orthodox Christians who confront these questions as a life and death matter in our personal lives. I remain forever grateful to God for the gift of Metropolitan Kallistos to the Church and to the world.

Some ten years ago I came across some of Metropolitan Kallistos’ lectures and by chance we met by email. I told him of my pursuit of a vocation and he kept encouraging me to continue which I did and still do. I had also met with a local Orthodox priest. It is Orthodoxy that is the anchor I needed after the sudden loss in the family which had set me adrift and it was the lectures of His Eminence that greatly helped me through.

I’ve very recently started a job as a support worker for adults with learning disabilities. In a lot of cases these disabilities fall under the ‘profound and multiple’ category. People with these kinds of support needs have, through most of human history, been prevented from taking part in wider society, and been deprived of their dignity, proper care, and freedom to self-express. I find the following paragraph from Metropolitan Kallistos’ The Orthodox Way to be an encouragement for the kind of work I’m now engaged in. It helps me to remember the place of supporting roles such as mine within the Kingdom of God.

Being free, each human being realises the divine image within himself in his own distinctive fashion. Human beings are not counters that can be exchanged for one another, or replaceable parts of a machine. Each, being free, is unrepeatable; and each, being unrepeatable, is infinitely precious. Human persons are not to be measured quantitatively: we have no right to assume that one particular person is of more value than any other particular person. Such calculations are an offense to authentic personhood. Each is irreplaceable, and therefore each must be treated as an end in his or her self, and never as a means to some further end. If we find people boring and tediously predictable, that is because we have not broken through to the level of true personhood, in others and in ourselves, where there are no stereotypes but each is unique.

Metropolitan Kallistos’ insights will, I’m sure, continue to enlighten Christians and others for many generations. His piece ‘On Same-Sex Love’ provides hope for productive dialogue on an issue where it often seems impossible.

May his memory and example be eternal!

I for one am very far from Orthodox in belief or practice, but my Greek Orthodox professors at university assigned and recommended material by Metropolitan Ware, and I found it consistently edifying, accurate, spiritually sound, and helpful in my Christian walk.

May he rest in peace, and may his memory remain eternal.