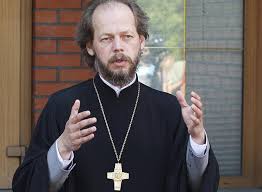 One morning a few weeks ago, I was awoken at 4:00 a.m. with an urgent message from a priest in Russia: their anti-war activities had put them on the radar of “Center E,” a secret police inside Russia which investigates religious extremism and terrorism. Arrest and imprisonment was a real possibility, a frightening prospect given the many accusations of torture inside Russia’s prisons.

This priest is a friend of mine, and a good man who wished harm on no one. However, in Russia it is illegal to oppose the war, with fines of up to $45,000 and prison sentences of up to fifteen years. Russia had outlawed the seventh beatitude, which blessed the peacemakers.

After reassuring my friend that I would help him, I lay awake for the next three hours, my mind racing. How can someone escape Russia? How do we support a person in this situation? Can they get a release from their bishop, or is their priestly career over? I waited until 7:00 to make calls. In the weeks since then I have spoken with many lawyers and NGO groups, priests and canon law experts, as well as a few politicians on behalf of my friend. Word started to spread that there were Orthodox Christians outside Russia who wanted to help, and so I’ve been in touch with more and more clergy inside Russia in exactly this same situation. They find themselves staring down imprisonment and torture for themselves, destitution for their family, and persecution by the Church. Each new priest I meet I tell that I will do everything I can personally for them and that they are not alone. Some priests have managed to get visas already, some have fled, but some still are stuck and in danger. These priests all want to find somewhere safe to live so that they can resume their advocacy for peace. If they stayed silent then perhaps prison could be avoided, but they have told me such is not possible. Besides, several have lost their livelihoods after being removed from active priestly service by the Church. The Church is trying to delegitimize their voices while taking away their income. Many of these priests are in dire financial straits now.

At the same time that I’ve been working with priests in Russia who want to support peace, I’ve been corresponding with peace activists inside Ukraine, including clergy. One of the groups that my organization, the Orthodox Peace Fellowship, has partnered with is Ethos, which is running a project called “God Against War.” This is a remarkable group of clergy and Christians who are devoted to peace. Thousands of Ukrainians, many innocent, have been murdered in the last few months. Millions have been displaced. Atrocity after atrocity has piled up. Nonetheless, our partners in Ukraine have continued to speak out through it all, publishing articles like “Bucha: Where was God?” as well as an appeal to have Patriarch Kirill tried by an ecclesial tribunal. Father George Kovalenko, a priest who leads this effort, is a brave and clear-eyed man who has decided to stay in Kyiv through every bombardment. I heard from another peace activist in Ukraine that she had the opportunity to escape, so Father Kovalenko drove her all the way to the border to get her safely across. After ensuring her safety, he turned around and drove straight back to Kyiv.

Ethos and those behind it are an incredible example and witness during this very dark time. However, just like my friends inside Russia, they also need help. Father Kovalenko and others have told me about how focused the world is on Russia right now that Ukrainian voices are being drowned out. They have spoken about the great needs inside Ukrainian society. To solve this they have started two publishing programs. One, “Voices from Ukraine,” aims to amplify voices of Ukrainians, while “Voices to Ukraine” publishes material on war and peace from outside the country for a Ukrainian audience. They publish in Ukrainian, English, and Russian, all on a volunteer basis. This last point is remarkable given the absolute horrors that are facing ordinary Ukrainians.

It is a testament to the power of faith and the strength of the human spirit that against all odds there are still clergy and other Christians inside Russia and Ukraine speaking out for peace. It is our duty as Christians outside these countries to stand in solidarity with their voices and do all we can to amplify them. To that end, my organization has launched two fundraisers, one to support Father Kovalenko and other peace activists inside Ukraine, and the other to support the many priests in Russia in need of evacuation. Father Kovalenko has told me that they need more funds to produce more articles and to flesh out their translation work. The war has been incredibly destructive to their efforts. My contacts in Russia have also spoken to me of their great needs and difficulties in relocating.

This Holy Week, when fasting, prayer, and charity are meant to be increased, I encourage you to spread the word about these important fundraisers for these incredible people, and if you can, please consider contributing.

Nicholas Sooy is a doctoral candidate in the philosophy department at Fordham University. Together with his wife, Oshadhi Sooy, he directs the Orthodox Peace Fellowship in North America and edits its journal, In Communion. He has written previously for Orthodoxy in Dialogue.

See the extensive Ukraine section in both Archives listed at the top of this page.

We wish all of our brothers and sisters around the world a most blessed and spiritual Holy Week.

One thought on “ACTIVIST PRIESTS: VOICES FOR PEACE IN UKRAINE AND RUSSIA by Nicholas Sooy”