Most of the following editorial was written before an observant reader alerted me to the fact that Rod Dreher—on what I mistakenly assumed was a serious online journal (The American Conservative)—had christened me a bitchy queen, demonstrating yet again his extraordinary intellect, debating skills, and theological and spiritual depth. 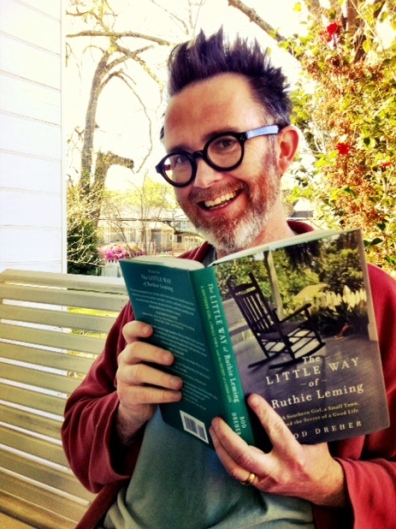 (I should remind Mr. Dreher where he heard the expression bitchy queen: it’s gay bar lingo. He might want to readjust his mask. It’s slipping.)

It’s unclear what has earned me this honour. Was it my Benedict’s Option? A Priest Forever? Rod Dreher Glorifies Colonialism, Adds African Barbarians to List of People who Terrify Him?  Helping Our Brother on Pentecost? Two Letters to a Struggling Monk? Another Day, the Same Old Rod Dreher? Orthodoxy in Dialogue’s steady stream of fundraising appeals for child cancer patients, homeless people with nothing to eat and nowhere to come in from the cold, displaced children and families in the war-torn Middle East, children and families detained by the US government at the Mexican border in some of the most inhumane conditions of the modern era? My untiring advocacy for queer children, teens, women, and men driven to despair by the likes of him and like-minded priests and their poisonous claptrap?

A commenter in the same thread at The American Conservative where Mr. Dreher called me a bitchy queen characterized me as “a deadbeat dad who abandoned his wife and kids to start a sex website.” Aside from the fact that my wife left me for unclear reasons in 1995, and I was deposed from the priesthood in 2002—also for unclear reasons—and I started Orthodoxy in Dialogue in 2017, name-calling, fantasies about my personal life, and calling Orthodoxy in Dialogue a sex website typify the only level of discourse that Mr. Dreher’s aforementioned intellect, debating skills, and theological and spiritual depth are capable of generating.

Assuming that our brother Rod Dreher is paid to write for The American Conservative, it’s pleasing to to see how often Orthodoxy in Dialogue contributes to his paycheque.

He returns the favour by sending us boatloads of new readers (our analytics tell the tale) every time he clutches his pearls to learn just how many of us who have been Orthodox far longer than he (because born into families that have been Orthodox for a millennium or longer), who have actually devoted an entire lifetime to studying Orthodox history, theology, and spirituality with blood, sweat, and tears, who have immersed ourselves as seminarians (in Orthodox seminaries) and priests (educated in Orthodox seminaries) in the Church’s liturgical life far more deeply than he, simply do not recognize our Church and our faith in anything he writes.

Speaking for myself—whose Sicilian paternal family was Orthodox from the days of the 5th-century St. Philip of Agira (after whom we are named) until the 14th or 15th century, and whose Ukrainian maternal family has been and remains Orthodox since the baptism of Kyiv in the waters of the Dnipro—I hope I can be forgiven for not sharing Mr. Dreher’s enthusiasm for unconverted convert priests from American-style evangelicalism and their unconverted convert followers who see our Church as an ideological escape hatch from the modern world or, what’s worse, an escape from the wrong kinds of people.

Nor do I recognize the St. Benedict of the Dialogues or the Rule, whom I have known and loved since childhood, and to whom I often pray in adulthood, on a single page of The Benedict Option.

Nor, finally, do I recognize the Gospel in the dog whistle of Mr. Dreher’s “Europhilia” — which becomes considerably less a dog whistle when he admits to fretting over wrong-coloured people invading Europe as he licks garlicky olive oil from his delicate white fingertips.

In response to Father Aaron Warwick’s courageous, profoundly pastoral, and outstanding Pastoring LGBTQ Individuals in the Orthodox Church (with which I nevertheless have some disagreements, to be addressed in an upcoming article), Mr. Dreher clutched his purse to his bosom and shrieked to his terrified readers, Is US Orthodoxy going pro-gay?

Mr. Dreher’s facile use of pro-gay in juxtaposition with Orthodoxy exemplifies the limits and theological meaninglessness of his vocabulary. Indeed, he shows an utter lack of creative imagination for how an Orthodox person of same-sex orientation might live his or her life in Christ in ways that are not “erotomaniacal” (his word du jour?)—just as Orthodox Christians of opposite-sex orientation are called to live.

(We can speculate on the reasons for Mr. Dreher’s voyeuristic fixation on same-sex sex whenever the subject of same-sex love, and of the divinely endowed human need for the security and reciprocal support of a monogamous life-companion, come up for discussion—and our speculation might not be far from the truth.)

At the risk of a tautology, pro-gay is theologically meaningless because, meaning everything and anything that each individual speaker and hearer thinks it means, it comes to mean nothing at all.

It seems significant to ask why, in the minds of certain fragile religious types for whom Mr. Dreher, Father Trenham, Father Parker, Father Whiteford, Father Farley, Father Jacobse, Dr. Ford, et al. speak, “homosexuality” (and, by extension, “pro-gay”) only ever conjures fevered mental images of its most promiscuous and lascivious manifestations, while “heterosexuality” only ever elicits the most reverential tones—despite the latter’s well-known proclivity to even greater promiscuity, lasciviousness, and immorality. (Fact: “Homosexual acts” never result in abortion. “Heterosexuality” does that. See How Should Orthodox Parents Talk to Their Kids about Heterosexuality? for more examples of the inherent immorality of “the straight lifestyle,” which responsible Orthodox pastors and parents should use to terrify children, teens, and adults struggling with OSA [Opposite-Sex Attraction].)

This is to say that, in the present conditions of human life, “heterosexuality” is absolutely no less fallen than “homosexuality.” Almost three years ago I wrote in Conjugal Friendship:

Yet to project “sexual orientation” anachronistically onto a time and place where such a thing was unknown as a marker of personal identity is historically inaccurate and theologically unhelpful. If conceived as indiscriminate carnal desire for members of the opposite, one’s own, or both genders, all sexual orientations originate in the fall of human love from its primeval capacity to reflect and participate in the ecstasy of divine eros. The genius of Florensky, who wrote at a time when the idea of sexual orientation had already gained widespread currency in Russian society, resides in his transformation of the concept into a radiant vision of the spiritual orientation of one person to another.

Among all my respondents of whom I am aware, Dr. David Dunn alone exhibited the perspicacity to discern the centrality of those three sentences to my argument in Conjugal Friendship and, by extension, their centrality in my (inadequately articulated) theological and spiritual vision of sexual love for both opposite-sex and same-sex couples. Yet St. Maximus the Confessor, who did not shy away from suggesting male-male conjugal intimacy as an honourable metaphor for the Kingdom of Heaven, also speculated that human reproduction would have taken place in a manner similar to the conception and birth of Christ (!) if man had not fallen. Closer to our own day, Father Sergius Bulgakov speculated that—specifically with respect to male persons—if man had not fallen, men would have become aroused and had an erection only when they freely chose to do so, and only with their one and only lifelong spouse.

Indeed, in Ps 50/51:5, Scripture itself provides a humbling reminder to all of us that—regardless of orientation, regardless of how authentically loving our conjugal relationships, regardless of whether “married in church” or not—not one of us experiences his or her sexuality without sin.

Of course, for those in our Church who rely on sound bites and bumper sticker slogans for their “theology” and “spirituality,” or who seek no other goal than to stoke fear and hatred of their fellow human beings and fellow Orthodox Christians created and beloved of God, this is much too much to process.

Kindly see A Bed Undefiled: Foundations for an Orthodox Theology and Spirituality of Same-Sex Love and A Bed Undefiled: A Partial Retraction for a more thorough, but nonetheless inadequate, exposition of my vision for same-sex love in the Orthodox Church.

See the Warwick Files in our Archives 2020 for a catalogue of articles written in response to Father Warwick.

Also see the Fifty Years after Stonewall and Sexuality and Gender sections in our Archives 2017-19 and Archives 2020.

Giacomo Sanfilippo is an Orthodox Christian, PhD student in Theological Studies at Trinity College in the University of Toronto, founding editor at Orthodoxy in Dialogue, father of five, grandfather of two, and former priest. He tweets @GiacoSanfilippo.