One of the most frequently heard criticisms of the Ecumenical Patriarchate’s handling of the Ukrainian situation runs something like “you don’t ‘reward’ schismatics by receiving them back into communion.” Yet healing schism and reconciling schismatics to the Church has always been—from the beginning—precisely what the Church does.

If “you don’t ‘reward’ schismatics by grantng them autocephaly,” is this not precisely what the Moscow Patriarchate did in 1970 by creating the autocephalous Orthodox Church in America (OCA)? Giacomo Sanfilippo writes in Ukrainian Autocephaly: An Awkward Spot for the OCA:

As can be read here, on March 31, 1970 the Soviet-controlled Moscow Patriarchate and the schismatic Russian Orthodox Greek Catholic Church of America (popularly known as “the Metropolia”) entered into an Agreement which resulted in the immediate restoration of communion between them and—ten days later—a Tomos of Autocephaly granted by the former to the latter, followed soon thereafter by the name change of the latter to the Orthodox Church in America.

Metropolitan Hierotheos’ essay places these questions in an important historical and ecclesiological context.

Apostolic Tradition and Apostolic Succession in the Mystery of the Church 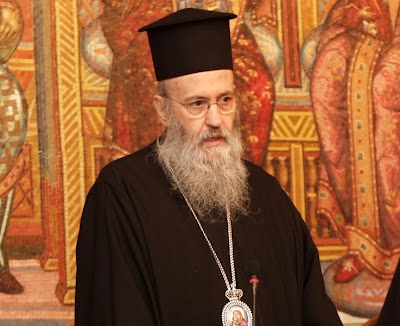 In a previous article I announced that I was going to publish a text in which I would attempt to interpret what the Apostolic Tradition and the Apostolic Succession are within the mystery of the Church. This is the purpose of this present article, which does not claim to be authoritative, but emphasises a few truths and is open to correction. In any case, in the Church we always remain in the fear of God and in a state of discipleship. The Apostles of Christ have continued as Disciples of Christ for ever.

The decisions of the Local and Ecumenical Councils are significant and divinely inspired. They show how the Fathers resolved the issues that arose in their time, according to the words of the Apostle Peter, “For it seemed good to the Holy Spirit, and to us” (Acts 15:28). The illumination of the Holy Spirit is sought, which is given to the Saints, who are vessels of the Holy Spirit and instruments of God.

We have absolute respect for these decisions and we interpret them ecclesiastically. I say this because there are some people today who invoke the sacred Canons in a rationalistic spirit, as though they were laws of the state and provisions of the constitution. One ought, however, to see the spirit of the sacred Canons: to accept them without overlooking them, and to struggle to find the spirit that gives life, not the letter of the law that “kills” (2 Cor. 3:6).

Prompted by the so-called “Ukrainian issue”, there is very widespread discussion about how it should be resolved. I have observed recently that many people have concentrated their interest on the extent to which the bishops who constituted the Ukrainian Autocephalous Church have Apostolic Succession, because they come from excommunicated, schismatic and “self-ordained” bishops.

Also, some people speak about the extent to which the bishops who made up the Ukrainian Autocephalous Church have Apostolic Succession. It is necessary, however, to examine what the Apostolic Tradition is, and, primarily, whether these people consider at that same time that Western Christians (Roman Catholics, Anglicans, Protestants) and Oriental Christians (Monophysites, Monothelites) have Apostolic Succession, belong to the Church and have sacraments.

In the last analysis, what is Apostolic Succession? Is it only a “series of ordinations”, regardless of the Apostolic Tradition, in other words, of Pentecost? And, more generally, what is the mystery of the Church?

Some answers will be provided in the following pages, with no claim to the infallibility possessed by the deified saints, who make decisions synodically. I would ask readers to make sure that they have a good understanding of the first points, and then to interpret what is set out in the fourth part in the same spirit.

1. The Mystery of the Church

First of all, it is essential to look at what the mystery of the Church is.

The Church is the Body of Christ and the communion of deification. Christ assumed human nature, mortal and passible but utterly pure, in order to overcome the devil, sin and death. The Church is before all ages, eternal, but it was manifested in the flesh of Christ.

The Church is the Body of Christ, which means that, according to the Apostle Paul, Christ is the head of the Church. “And He put all things under His feet, and gave Him to be head over all things to the church, which is His body, the fullness of Him who fills all in all” (Eph. 1:22-23).

The Apostle Paul writes in the same Epistle: “Christ…loved the church and gave Himself for her, that He might sanctify and cleanse her with the washing of water by the word, that He might present her to Himself a glorious church, not having spot or wrinkle or any such thing, but that she should be holy and without blemish” (Eph. 5:25-27).

This means that the Church is holy, spotless and pure, and this is due to her head, who is Christ. The Church as the Body of Christ has no spot or wrinkle, but is holy and without blemish. It is understood by this that the holiness of the Church comes from, and is due to, her holy head, and not to the holiness of her members. The members of the Church, the members of Body of Christ, do not sanctify the Church but are sanctified by her, above all by her head, by Christ.

By extension, the sins of the members of the Church and the unworthiness of her clergy – bishops, priests and deacons – do not “defile” the Church. Rather, the clergy, even if they are unworthy, remain within the Church and officiate, when no canonical act of the Church has been issued for their suspension or removal from office, and in due course they are cast out from the Church, just as the human body casts out all alien elements that cannot be assimilated.

Metropolitan Hierotheos is a scholar and author of many books, among the best known to his English-language readers Orthodox Psycotherapy: The Science of the Fathers.

One thought on “THE ECUMENICAL PATRIARCHATE, RECEPTION OF SCHISMATICS, AND UKRAINIAN AUTOCEPHALY by Metropolitan Hierotheos (Vlachos)”