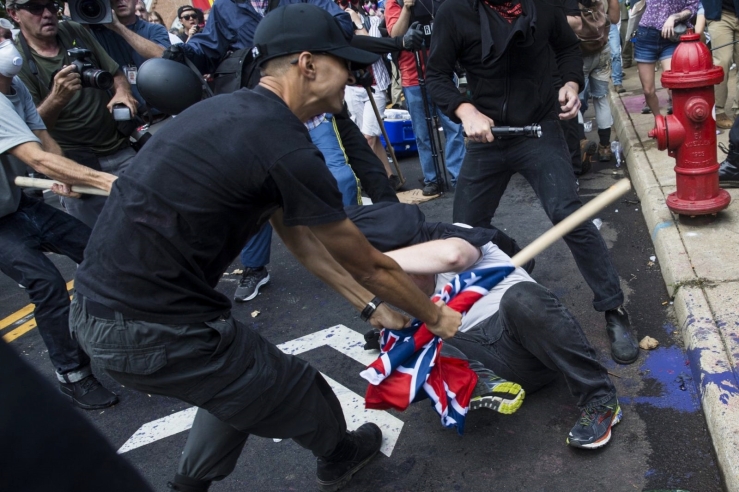 Vasillios Pistolis, a U.S. Marine, clubs a man with a wooden flagpole during the deadly white supremacist rally in Charlottesville on Aug. 12, 2017. (Samuel Corum/Anadolu Agency/Getty Images)

The May/June 2016 newsletter of Holy Trinity Greek Orthodox Cathedral in Charlotte NC feted the high school graduation of Vasillios Pistolis. (Scroll down to page 8 here.) The congratulatory blurb mentions his past involvement in the Marine Corps Junior ROTC, his recent enlistment in the United States Marine Corps, and his imminent departure for boot camp at Parris Island.

A year later—as reported jointly by ProPublica and Frontline/PBS last month—the young Pistolis showed up in Charlottesville as a member of Atomwaffen Division. The report explains:

Of the many white supremacist organizations that have sprung up in the past few years, Atomwaffen is among the more extreme, espousing the overthrow of the U.S. government through acts of political violence and guerrilla warfare.

The day after the ProPublica/Frontline report, Pistolis’ hometown newspaper—The Charlotte Observer—identified him as one of their own and a member of the Greek Orthodox cathedral parish there.

The 18-year-old, excited by his handiwork at the bloody rally in Charlottesville, Virginia, last summer, quickly went online to boast. He used the handle VasillistheGreek.

Vasillios Pistolis had come to the now infamous Unite the Right rally eager for such violence. He belonged to a white supremacist group known as Atomwaffen Division, a secretive neo-Nazi organization whose members say they are preparing for a coming race war in the U.S. In online chats leading up to the rally, Pistolis had been encouraged to be vicious with any counter-protestors, maybe even sodomize someone with a knife. He’d responded by saying he was prepared to kill someone “if shit goes down.”

One of Pistolis’ victims that weekend was Emily Gorcenski, a data scientist and transwoman from Charlottesville who had shown up to confront the rally’s hundreds of white supremacists. In an online post, Pistolis delighted in how he had “drop kicked” that “tranny” during a violent nighttime march on the campus of the University of Virginia. He also wrote about a blood-soaked flag he’d kept as a memento.

“Not my blood,” he took care to note.

On June 20, 2018 Frontline reported that—two years after his high school graduation and enlistment in the Marines—Pistolis has been court-martialed and sentenced to a prison term.

Certainly the Church must not abandon our brother Vasillios in his hour of need. His pastor must visit and care for him. So must his Orthodox brothers and sisters who live near enough to do so. We must all pray for his repentance and salvation, for his safety and well-being in prison and after his release. We must love him as we love ourselves.

Yet our duty as Church does not end there.

It would be easy to dismiss the Pistolis case as an isolated anomaly and go about our ecclesiastical business. Every faith community has a few bad apples, no? Yet to do so would mean that we have not been paying attention: there is a growing pattern of white supremacist and neo-Nazi converts finding a home in Orthodoxy; indeed, of the Orthodox Church producing her own homegrown varieties.

Check the long White Supremacy and Racism section in our Archives by Author. Since our White Supremacy in the American Orthodox Church: An Open Letter to the Assembly of Canonical Orthodox Bishops of the United States of America of January 22 we have reported “again and again” on the spread of white supremacy in the Orthodox Church in the US—in our parishes, our seminaries, our monasteries. We have testified to the growing fears of Orthodox Christians of colour in their own Church. We have appealed to, begged, cajoled, nagged the hierarchy and the seminaries—individually and collectively, publicly and privately—to acknowledge the problem publicly and to state publicly how they intend to study and deal with it.

Today, five months later to the day, our efforts continue to be met with dead silence. Only one priest wrote to us—whose parish is widely known to be a hotbed of Orthodox neo-Nazism. He was furious that we had questioned his Metropolitan about his parish.

American neo-Nazism neither exists in a vacuum nor limits itself to strictly whitist aims. It legitimizes itself by making common cause with a violent strand of self-righteous, “Christian” moralism, anti-abortionism, homophobia, and transphobia—for which it is not difficult to find justification in the antics of the Orthodox culture warriors among our clergy and laity. (See, for instance, last week’s report on Father Josiah Trenham, who two years ago came to the attention of the Southern Poverty Law Center’s Hatewatch Staff.) When a Trenham or a Jacobse, a Dreher or a Banescu, allows no place for sexual and gender minorities not only in the Church, but not even in civil society, their words incite to violence. It makes no difference whether or not they intend their words as such an incitement.

We are grateful for the few hierarchs who have spoken out publicly against the monstrous policies of the current White House at the US-Mexico border—policies which are themselves a manifestation of white supremacy—which we urged in our recent Open Letter to the Church: The Humanitarian Crisis at the US-Mexico Border. (We wonder why more have not done so.)

It is not too late for our hierarchs and seminaries to do the same with regard to the very grave problem of white supremacy in the Church. If Matthew Heimbach and Matt Parrott could not be a wake up call for us, maybe Vasillios Pistolis can be.

Please consider joining the Patrons of Orthodoxy in Dialogue to support our work.

Have you checked out The Marketplace yet?

4 thoughts on “ORTHODOXY, WHITE SUPREMACISM, AND THE COURT-MARTIAL OF VASILLIOS PISTOLIS”