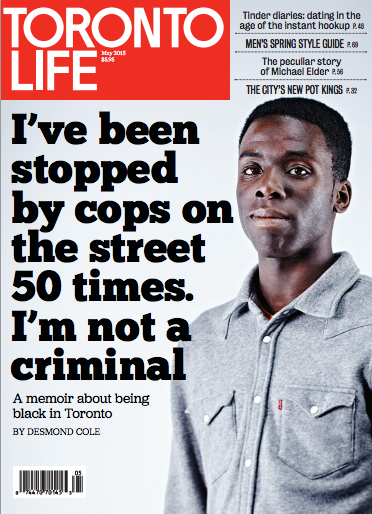 I started to write this article in March or April, but became sidetracked by other matters. What compels me to finish it now is a conversation that I had last night at a barbecue for Trinity College’s theology students. My interlocutor was a 24-year old man whose family emigrated to Canada from Nigeria when he was 3.

A cop stops him. Where did you get that bike?

I started shaking inside. I could hardly hold back my tears for that 10-year old boy, and for the young man sharing his story with me—to his amazing credit, with sadness but no malice in his eyes.

We talked a little about Desmond Cole. Of course my friend knew the name well. A local activist, freelance journalist, and blogger at Cole’s Notes, he has been stopped by the cops fifty time—fifty times!—for the suspicious activity of Walking While Black in Toronto.

If you’re white and don’t know what “white privilege” means, or you deny that it exists, I’ll give you a pass until the end of this article. I was that white man myself, seven years ago.

Don’t let my name fool you. With my Ukrainian and Lemko ancestry on my mother’s side, I’m as white as any Eastern European. I’ve been mistaken for Norwegian, Finnish, Swedish, Danish, and German. Apparently, speech therapy in early childhood left me with an accent—undetected by myself, of course—that many people over the years have guessed as Northern European, even people in my own hometown of Jamestown NY and a Canadian immigration officer who prided himself on his unfailing ability to identify foreign accents.

Which is to say, I’m both possessor and beneficiary of white privilege, just because of how I look and speak.

Until 2011, at the age of 56, I had never heard the expression “white privilege.” That was the year that I went back to school to complete my long interrupted bachelor’s degree.

At first I balked, as many white people naturally do when confronted with the idea for the first time: Me? Privileged? Ha! My life has been and continues to be extraordinarily difficult. Neoliberal capitalism hasn’t worked out for me. In years past—but not that long ago—I have lost jobs, had cars repossessed, slept on the ground because I had nowhere else, shoplifted in grocery stores so as not to starve or in Walmart when I didn’t have money for a winter coat, cleaned a friend’s house in exchange for a couch to sleep on, received disability, received welfare. Even now my life teeters chronically on the brink of homelessness and hunger.

I didn’t feel particularly “privileged.” Not by a long shot.

In 2011, academia was a far cry from what it had been in 1973, when I started my BA. The option to major in “sexuality studies?” Talk about “white privilege?” “Postmodernism?” “Queer theory?” I felt as though I had to learn a whole new language, let alone new ways of looking at the world in which I had my being. But I was determined first and foremost to listen, to hear, to keep an open mind, to prove that this old dog could be taught a few new tricks.

So, what is “white privilege,” you ask? I offer the following signifiers in random order:

What relevance does this topic have for an Orthodox forum? If you need to ask that question, you haven’t been paying attention. Once again, I refer you to the White Supremacy and Racism section in our Archives by Author. Make the time to read every article there. More and more the Orthodox Church seems to be a natural fit for the diabolical ideologies of American white nationalists and neo-Nazis. As reported here, we even produce some of our own. As reported here, Orthodox Christians of colour wonder how much longer they can last in their own Church.

Back in the mid-1970s, my parish priest told me of an African-American graduate from St. Vladimir’s Seminary who had a white wife. No bishop would ordain him, because what parish would accept them?

If we white people are honest with ourselves, all of us participate—on some level, to some degree—in white supremacy and racism, or at least in whitism. Our repentance before God, before one another, and especially before our brothers and sisters of colour must be deep and never-ending. None of us has room for complacency or self-satisfaction in this.

Forgive me and pray for me.

Giacomo Sanfilippo is a PhD student in Theological Studies at Trinity College in the University of Toronto and an editor at Orthodoxy in Dialogue. His “Father Pavel Florensky and the Sacrament of Love” appears in the current issue of The Wheel.

Use our PayPal Button if you wish to support our work.