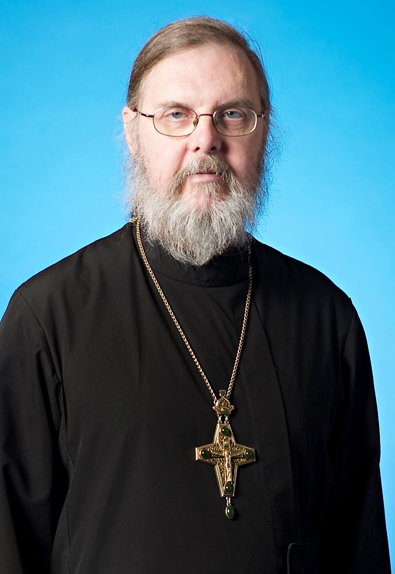 Predictably, Father Lawrence Farley of Langley BC has set his superior and infallible understanding of Tradition against the “downward path” that he claims to have witnessed in Metropolitan Kallistos (Ware) over the course of many years.

You can read Father Farley’s “Metropolitan Kallistos and The Wheel” of June 13 on his No Other Foundation blog. We readily acknowledge that, to his credit, his tone is more measured than usual on the topic of same-sex love: in this he distances himself from Chris Banescu’s descent into utter irrationality. He writes, “I should say in advance that it would be unfair to characterize his stance as pro-gay. And much of what he says in the piece is quite good….” At the same time, Father Farley barely masks his patronizing condescension towards one of our Church’s most venerable and esteemed senior hierarchs.

We include here some of the more salient excerpts from Father Farley’s post:

As well as following his upward path of ecclesiastical promotion, I have also followed what I consider to be his downward path away from Orthodox Tradition…. Of late he has written about homosexuality, publishing the Foreword for The Wheel, a publication whose stated purpose…is actually to de-construct the current Orthodox Tradition and offer what St. Paul would have called “another Gospel.”

My first concern is that he has chosen to write a Foreword for The Wheel in the first place. Its professed neutral stance notwithstanding, those familiar with the publication know that its editorial and advisory board include people well-known for their aggressive and destructive homosexual agenda, and that it is anything but neutral or open-minded regarding the controversial sexual issues of the day. It is, in fact, simply an instrument for the advancement of a homosexual agenda within the Orthodox Church.

If a respected author writes for a publication whose known purpose is the promotion of a particular agenda, then by that very act he lends credence and credibility to that agenda. […] I suspect that the Metropolitan, whose entire career has been as an academic in Oxford and a parish priest there, is unable to separate the lecture room from the world outside it.

The Metropolitan writes as if he were always in his lecture hall, when in fact he is writing in the middle of a war zone. The truth is being challenged, and souls are being enticed, deceived, and lost. What one needs from a bishop now is not questions, but answers, not the murmur of a lecturer, but the blast of a trumpet. As a bishop, that is his job.

Although the human person is a cloudy and complex mystery, the teaching of the Scriptures is crystal clear—unwelcome in many places, but still crystal clear.

…[T]he Metropolitan wonders, “Why do we put so great an emphasis upon genital sex?” The question is an astonishing one, all the more so since it is those promoting a homosexual agenda which place the emphasis on genital sex. One asks the homosexual in return, “If genital sex is not important, why do you insist upon it? Why do you insist on not just living with [a] person of the same gender, but also having sex with him?” The whole screaming insistence upon gay marriage in our culture is predicated precisely on the importance of genital sex.

…[Homosexuality] is the frontline in the World’s perennial war against the Church. In this war, one needs trumpets, and clarity, and compassionate, confident answers. One wishes that in this battle the Metropolitan had not given such an indistinct sound.

Our main purpose in drawing attention to Father Farley’s post is to add his voice to our conversation on Orthodoxy in Dialogue, since he chooses not to sully himself or “validate” us by writing for us directly.

First, why does Father Farley see the Church as at war with the world that God loved so much that He sent His Son not to condemn it, but to save it?

Second, how does Father Farley find “crystal clarity” in the Scriptures when St. Maximus the Confessor, for instance, did not?

Third, if Father Farley believes (as we certainly hope he does) that the Orthodox Church is the One, Holy, Catholic, and Apostolic Church, why is he so fearful that she will go the way of the church that he fled and others like it? “…[I]f this plan or this undertaking is of men, it will fail; but if it is of God, you…might even be found opposing God!”

Fourth, by what gift of clairvoyance does Father Farley “know” that committed same-sex couples are sex-obsessed, and that this sex-obsession stands behind the “whole screaming insistence upon gay marriage in our culture?” If anyone is obsessed with “gay sex” it seems to be Father Farley himself. Why is that?

We will have more to add in due course. As always, we welcome responses from guest writers as well, whether in the form of an article or a letter to the editors.

Father Lawrence Farley is a convert from Evangelical Anglicanism and a priest of the Orthodox Church in America (OCA).

Please consider joining the Patrons of Orthodoxy in Dialogue to help us continue our work. A PayPal button has been added for your convenience.

Have you checked out The Marketplace yet?

3 thoughts on “NO OTHER FOUNDATION BUT FARLEY?”