Their religious roots, not their Communist experience, support authoritarianism and risk aversion. 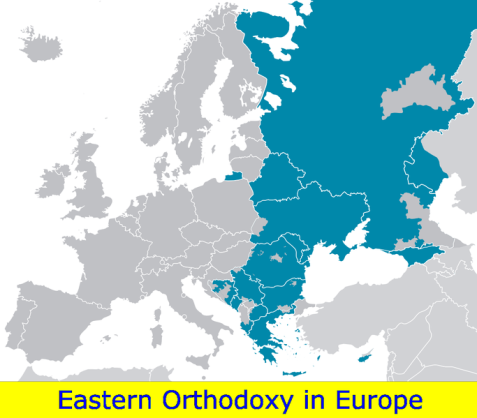 Eastern Orthodox Christianity has done more to shape certain ex-Communist countries than communism. It also, some say, made their people relatively unhappy and anti-capitalist. This theory got a lot of play in 1990s Russia but has now resurfaced in a fresh World Bank working paper.

Its authors, former Bulgarian finance minister Simeon Djankov and Elena Nikolova of University College London, analyzed data from the World Values Survey and the European Bank for Reconstruction and Development’s Life in Transition Survey to study the correlation between religious background and attitudes. They concluded that Orthodoxy made certain countries fertile ground for communism and generally shaped their path as distinct from those taken by countries steeped in Western Christian traditions. They wrote:

Western Christianity (which gave rise to Catholicism and Protestantism) placed emphasis on rationalism, logical exploration, individualism, and the questioning of established authorities. Eastern Christianity (from which Eastern Orthodoxy originated) was associated with mystical and experiential phenomena, was more affectionate and communitarian, and put less emphasis on law, reason and questioning authorities. Remarkably, these long-run attitudinal differences survived after nearly 50 years of communism.

Communist rulers weren’t church-friendly but, according to Djankov and Nikolova, they exploited the features of the Orthodox worldview that they found useful, such as the emphasis on tradition, communitarianism, “less reliance on legal exchanges” and a greater respect for authority. So the mindset shaped by the suppressed religion persisted, suppressing respect for the rule of law, iconoclasm,  creativity and innovation.

If you’re like me, at this point you begin to hear echoes of what Russians, Bulgarians, Ukrainians and people in former Yugoslavia (but not Greeks — they were rich back then and knew about capitalism) were told by emerging elites in the 1990s: that, in full accordance with the late German philosopher and political scientist Max Weber’s work, capitalism was closely linked with the Western religious tradition, especially with Protestant ethics, and that this explained the relative success of countries like Poland and the Czech Republic in their post-Communist transitions.

One could read about this in academic publications at the time, too — the 1989 work of sociologist Andreas Buss was a classic. But the tradition, at least for Russians, is much older: It’s rooted in the work of 19th century westernizing philosopher Pyotr Chaadaev, who believed that, unlike European nations, Russia adopted the wrong type of Christianity. “Though we are Christians, it was not for us that the fruit of Christianity ripened,” he wrote. “There is something in our blood that rejects true progress.” In the 1990s, as Russia tried to join “the civilized world,” Chaadaev was suddenly popular again.

Then, Russia and its Orthodox neighbors appeared to find their place in the world and largely settle into a pattern of growth and convergence, and there was a pause in the related public discussion. Now, Russia’s refusal to join the Western world and the economic malaise in Greece, Ukraine and other Orthodox nations appear to have sparked a revival of this old line of thinking.

Djankov and Nikolova see supporting evidence in sociological data. They find that Orthodox Christians are less satisfied with their life and have less social capital than Catholics or Protestants — and about as much as non-religious people. They are also less likely to support new ideas, take risks or want to work in large private companies. They are more supportive of government responsibility and government ownership. In short, they are less suited to capitalism.

“Theological differences among different Christian denominations may have set countries on different development paths long before the arrival of communism,” Djankov and Nikolova write.

Twenty years ago, I would have been inclined to discard this idea simply because it didn’t ring true intuitively. It even sounded rather humiliating as most people scrambled to adapt to the new economic reality, often in highly entrepreneurial if somewhat lawless ways, and as respect for all authority vanished. It was difficult to match the emerging cut-throat capitalism to the Orthodox tradition, even if the robber barons made a point of paying for new gilt veneers on the onion domes of Orthodox churches.

Now, however, I find it difficult to disagree with the analysis of Djankov and Nikolova, at least when it comes to Russia. Approaching the problem from a totally different angle, Ivan Zabaev, a Russian sociologist who works at Russia’s top Orthodox university and who received a government grant for his recent research, comes to a similar conclusion:

The specific character of Orthodoxy is that it regards not vocation or professional activities as a means to salvation, but obedience and humility in relation to a (spiritually) more experienced person or a person at a higher place in the hierarchy.

The ancient roots and religious underpinnings of a culture may indeed have a greater impact on the path a country takes than any rational, geopolitical or economic considerations. If so, nations with an Orthodox background aren’t really comfortable in a Western-dominated world — a source of tension that can only be mitigated, not removed.

This article appeared originally on April 26, 2018 on Bloomberg View. Republished with permission.

Leonid Bershidsky is a Bloomberg View columnist. He was the founding editor of the Russian business daily Vedomosti and founded the opinion website Slon.ru.