Orthodoxy in Dialogue has published the following articles related to a greater or lesser degree to intersex or intersexuality, the condition formally known as “hermaphroditism”: Greek Prayer for Transgender Name Change: Urging Caution,  Intersex vs. Transgender: Addendum to Greek Prayer for Name Changes, and On “Gender Change” and the History and Use of a Related Prayer. Please take the time to read these.

We know personally of at least one transgender individual who, during abdominal surgery at age 35, was found to have internal sex organs inconsistent with the external organs at birth.

In framing the title of the present article as a question, we do not mean to suggest that the scriptural account of human origins is somehow “wrong.”  Rather, we wish to push again and again for what Holy Tradition itself demands of us: that we never cease plumbing the theological, spiritual, and pastoral depths of that Tradition when it seems to collide with our ever-growing body of empirical knowledge—the operative word here being “seems.” For starters, see the list of questions at the bottom of Sexuality, Gender, and Christian Tradition: A Course Outline.

A world renowned colleague has stated in a private note to us that, while we cannot allow science to dictate our theology, we cannot do good theology without good science. 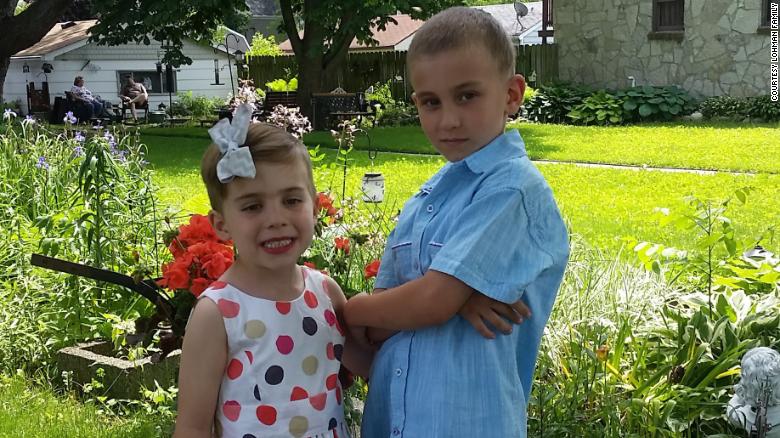 Rosie Lohman, left, poses with her brother in 2017. Rosie has been raised as a girl, but her parents refer to her as intersex and encourage gender fluidity. (Photo credit: CNN)

When Stephani Lohman got her first look at her newborn in the delivery room, she playfully hit her husband, Eric, on the arm. She made a flustered comment about how ultrasounds could get the sex of the child wrong.

The doctors in the Ontario hospital were silent. Eric knew that the situation was more serious than a mixup.

“I sort of looked around at that moment, and I saw what I would describe as panic on all of the medical staff’s faces,” Eric said.

They had expected their baby, Rosie, to be a girl, but her parents saw what seemed to be a penis. Eric remembered learning when he was getting his doctorate about babies born with genitalia that wasn’t typically male or female. He realized right away that Rosie was like those babies.

“I wanted the baby to be put on my chest right away, because I just had her, and I worked really hard for that moment, and they didn’t,” Stephani said, recalling that day in 2012. “And I was scared.”

The doctors covered Rosie with a blanket and took her across the room for what seemed like a long time, Eric said. When they returned, they offered what they knew: Rosie had atypical genitalia, and more tests were needed to determine whether she was genetically a girl or a boy and if she had a serious medical condition, Eric said the doctors told them.

The next few days were filled with extensive tests and examinations until the doctors were finally able to make a diagnosis. Rosie had two X chromosomes, and so was considered to be female, they said, but she had salt-wasting congenital adrenal hyperplasia, a severe form of a condition called CAH for short. People with CAH are missing an enzyme that the adrenal glands need to produce cortisol. Rosie’s body is unable to retain enough sodium.

The adrenal glands also produce the initial ingredients of sex hormones, so when the brain gets signals that cortisol levels are low, it demands that the adrenal glands work harder. That leads to a higher production of sex hormone ingredients, which results in an excess of male hormones. Those hormones are what cause the formation of atypical genitalia in fetuses with two X chromosomes while they’re in utero.

Rosie’s condition is classified as a DSD, or differences or disorders of sex development, by many physicians. Some patients and parents of patients — including Eric and Stephani — dislike this classification. They prefer the term intersex.

Many conditions under the DSD/intersex umbrella could result in a variety of different physical sex characteristics on individuals, such as an enlarged clitoris or a micropenis.

Atypical genitalia does not always occur in patients with CAH, but when it does, doctors sometimes encourage plastic surgery.

Eric remembered learning about these operations as a student, and he was skeptical.

Stephani stayed in the hospital with Rosie, who was still being monitored, and began to research the surgeries. At home, Eric did the same. They familiarized themselves with the list of potential long-term risks, such as chronic pain, an inability to orgasm or eventual rejection of gender assignment. If the doctors proposed surgery, Eric wanted to say no. Stephani didn’t even anticipate that it would come up.

“My idea, because I was very naive about it, was that they would never recommend anything that wasn’t necessary right now,” Stephani said. “Like, they wouldn’t put a tiny baby under the knife for no reason. Can you imagine a world in which they’re just doing cosmetic surgeries on babies? I couldn’t even imagine that existed.”

Continue reading this article at CNN.

See the extensive Sexuality and Gender section in our Archives by Author.

One thought on “MALE AND FEMALE HE CREATED THEM? RAISING AN INTERSEX CHILD by Daniella Emanuel”