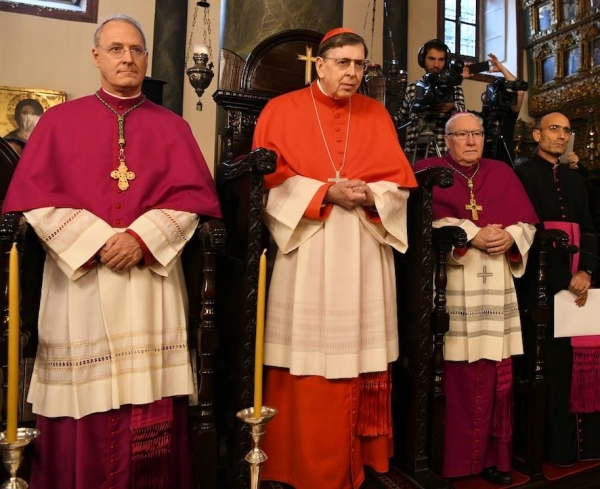 On November 30, the Feast of St. Andrew, Pope Francis sends message to Patriarch Bartholomew of Constantinople.

It has become a well established tradition: the exchange of delegations between the Holy See [of Rome] and the Patriarchate of Constantinople for the patronal feasts of SS. Peter and Paul (June 29) and St. Andrew (November 30).

This year the Roman delegation, led by Cardinal Kurt Koch, president of the Pontifical Council for Promoting Christian Unity, attended the Divine Liturgy presided by Patriarch Bartholomew in the Church of St. George in the Phanar, the patriarchal See. As customary, the Swiss Cardinal conveyed the greetings of the Bishop of Rome to Bartholomew.

In his message the Pope paid tribute to this “joyous tradition” which underlines “the profound link which unites” the two Sees despite centuries “of mutual misunderstanding, of differences, and of silence.”

It is in spite of these differences, and sometimes great misunderstandings, that the two Churches have been able to “preserve with care the apostolic Tradition,” Francis affirms. They have equally been able to perceive “the urgent call” to proclaim the Gospel to the men and women of the world. The Supreme Pontiff writes:

For this reason, we can work together in search of peace among peoples, for the abolition of all forms of slavery, for the respect and dignity of every human being, and for the care of creation.

United, we give a more effective response to the needs (…) of all who suffer from poverty, hunger, sickness, and war.

The Pope thanks the Patriarch for his presence alongside him during the Day of Prayer and Reflection for Christians of the Middle East on July 7 in Bari (southern Italy), a day in which the heads of the Eastern Churches took part. The Holy Father assures the Patriarch and the faithful attached to him of his prayers, and concludes:

In a world wounded by war, Christian unity is a sign of hope which must shine more visibly.

This brief report appeared in French at Vatican News on November 30, 2018. Translated by Giacomo Sanfilippo.

One thought on “FRANCIS TO BARTHOLOMEW: UNITY IS A SIGN OF HOPE IN A WORLD WOUNDED BY WAR”