In Orthodoxy in Dialogue’s A Conversation on Theology, Church, and Life by Father Andrew Louth, and again in his Editorial in the current issue of The Wheel, he cautions that fear never makes a legitimate starting point from which to do theology. In the same vein, Archbishop Lazar notes that fear incapacitates us as Church to encounter the world “with confidence and grace.” 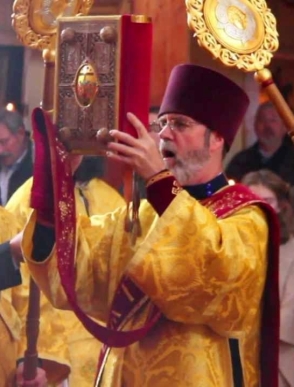 There is certainly a major shift in society, and it is very frightening to some people. Such shifts have gone on before in history, and they have always been frightening to a segment of the population.

We have seen this type of reactionism at other times in history, and we have learned little from it. Reactionism has never worked, and it has always compounded the social transformation that it was fighting against.

We should be able to encounter these shifts and changes in society with confidence and grace. Certainly, the Orthodox faith has the capacity to engage social transformations with dignity and peacefully. We must, however, be willing to accept that the past does not have all the answers. The past may be a foundation, but it is not a destination.

Fear incapacitates us and leaves us unable to encounter the realities of social change in any positive manner. Fear can drive us into a cold, unreasoning fundamentalism which does not allow us to draw from the real strength of the Orthodox faith to minister to society in a creative way which fully upholds the Gospel—the Gospel, not a religious ideology.

There must always be change, if for no other reason than the fact that we have acquired new knowledge and a greater understanding of our universe, our world, and humanity itself.

Fear can cause us to look for causes and cures in such debilitating constructs as racism, sexism, conspiracy theories, or even the demonization of refugees. Seeking simple solutions to complex problems can only help to create autocracies, authoritarianism, absolutism, and dictatorships, which ultimately seek to crush human aspirations and human freedoms. This takes place at the political and the religious level. Ultimately it betrays the very foundations and teachings of the faith itself—in our case, the teachings and life of Jesus Christ. We deify, or at least dogmatize, certain political and economic systems, but the Gospel does not have the answers to those questions: it is concerned with our spiritual life as distinct from worldly life. It does not deal with political and economic systems.

Archbishop Lazar (Puhalo) is a retired hierarch in the Orthodox Church in America (OCA) and founder of All Saints of North America Monastery in Dewdney BC, where he resides. In October 2017 the monastery organized the conference “A Sacramental Approach to Ecology,” co-hosted with the Department of Geography and Environment and the Department of Philosophy at Trinity Western University. See Archbishop Lazar’s interview “On the Neurobiology of Sin” and his June 18 letter to the editors in response to the border crisis at the US-Mexico border.

2 thoughts on “A BRIEF NOTE: THE PAST IS NOT OUR DESTINATION, FEAR IS NOT THE WAY by Archbishop Lazar (Puhalo)”