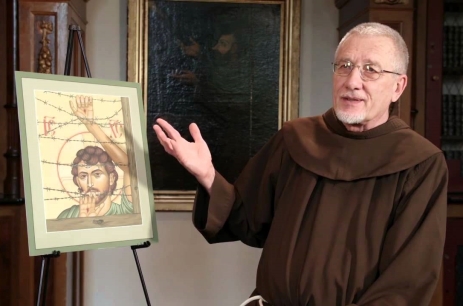 Robert Lentz, OFM with his “Christ of Maryknoll”

This article is inspired by Aidan Hart’s “Icons and Culture: Transformation or Appropriation?” where the author attempts to define the icon and to make sense of what it should be like in this day and age. He mentions the art of Brother Robert Lentz, the Roman Catholic Franciscan, writing: ‘‘The artist is using the icon format to legitimise his personal opinion rather than reflect the life of the Church.’’ Admitting that most artists nowadays use whatever historical style or mix of visual means they wish to express themselves, I would like to reflect a little more upon “the icon format” and “art.”

It is understandable that we Orthodox tend to define our Church’s art as something that does not belong to the world of art—that it has no part in its kaleidoscopic and traumatising diversity. We say that the icon should be a window, the window to heaven, and should not contain any impurity of this fallen world. Looking at what we call correct icons, praying in front of them, we break free from all the sin that surrounds us and focus on holy things.

However attractive this approach to understanding church art may be, it is rather irrational, not to say wild. There is little surprise in this, given the sorry state of the science of the history of church arts. The collective mind constructs a spiritual and lofty self-defensive justification, ignoring the complexity of the surrounding world. The best scientific name for what we call “the icon” that I have heard so far is “Byzantine portraiture.”

Another difficulty is that we have neither a crystal clear definition of art nor any universal measure for the significance or quality of a work of art. The boundaries between applied and fine arts have become extremely blurred after—pardon my mentioning this—a urinal was presented at an art exhibition in 1917, and such famous artists as Kazimir Malevich (1879-1935) expressed themselves through designing mass-produced tea sets, etc.

Together with this, we  have in front of us masterpieces of the glorious past alongside contemporary works whose artistic value is much more difficult to explain. We are also surrounded by advertisements, photographs, and examples of modern architecture that some of us define as visual noise. Whether we admit it or not, we are influenced by all of these at once. Therefore it takes much effort and practice to focus on a particular “pictorial language.”

Strictly speaking, it is a Medieval style of painting that is (or should be) taught and learnt at proper icon-painting schools. It is justifiably expected that those who want to call themselves “iconographers” should render images in an authentic style and with an appropriate quality of craftsmanship. However, I shan’t reflect today on that subjective and evanescent element which turns the reproduction of a traditional model into a masterpiece of art: let it suffice to try and analyse the style of the artist in discussion, i.e., Lentz.

As Hart writes, ‘‘The way Christians have painted traditional icons throughout the ages has always been influenced by the culture of which they are, to a degree, a part, and to which they naturally wish to respond.’’ On the one hand, this is exactly what Lentz is doing. Even those of his Byzantine portraits which are more likely to be called “icons” by devout Orthodox are definitely influenced by modern culture, particularly by advertisement and photography. 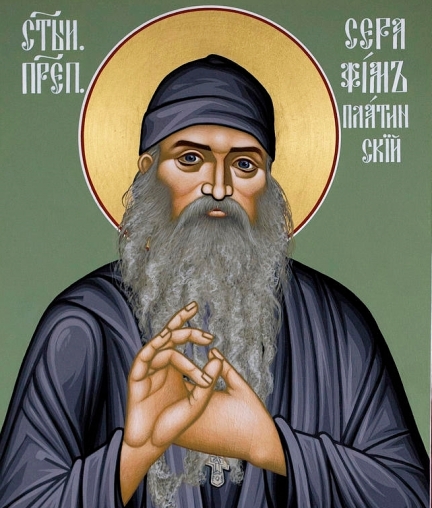 Asking for your forgiveness, I have looked deeper into this particular piece by Lentz. The way the image is placed, structured, and handled in terms of pictorial style does not permit me to call it Byzantine. Nor can I find anything that allows me to think that the author has developed his own style. Father Seraphim’s hands are too big to fit with classical proportions, and it is difficult to find any conventional justification for the left hand being behind the right. Neither ancient rhetorical gestures nor templates for icon-painters provide us with such a position for the hands. The significance of only half of the cross sticking out from under his beard remains hidden from me as well. The beard itself looks like it was painted in a more academic style, and—together with a more Byzantine face and head turned and tilted that way—makes me suspect that the contours of the image were rather lazily copied from a photograph. Seeing the way that the inscriptions of Seraphim’s name is positioned, I remember myself in art school making the same mistake, when you try hard to place the words exactly two centimetres from the edge, too much in a rush to change the size of the letters, then being severely told off by the team of professors next morning because of the way the letters intrude into the main image, distracting the viewer.

Again, seeing no artistic justification for this or for the choice of font, I remain suspicious that this artist is unprepared to fulfil the creative tasks that he sets for himself. Finding some interesting ideas in his other works, original in their initial essence, I am disappointed by the result of all the bits and pieces handled in a different manner with not much artistic excuse.

Given all these points, I find it worth mentioning that—if we agree that the icon constitutes Byzantine portraiture in its stylistic and cultural substance—those who want to call themselves iconographers should be focused more on the authenticity and integrity of their visual style. Lentz’s works look not in the least up to scratch.

However, the idea of portraying Bach, etc., in Byzantine style I find healthy. As for Lentz’s theological fantasies, let the professional theologians judge and analyse, if they find it necessary.

Irina Gannota is an artist with a degree in Ceramic Arts from the Stroganov Moscow State Academy of Industrial and Applied Arts. During her third year at the Academy she “discovered” Orthodox Christianity for herself. This led later to her artwork mainly in porcelain icons, which can be viewed in The Marketplace and on her website. She lives and works in Moscow.

Check here if you would like to become an editor for Orthodoxy in Dialogue. We are seeking two or three more individuals to join our team.

Blessed art Thou, O Christ our God,
who hast revealed the fishermen as most wise
by sending down upon them the Holy Spirit.
Through them Thou hast drawn the world into Thy net.
O Lover of man, glory to Thee.

3 thoughts on “ICONOGRAPHY AS BYZANTINE PORTRAITURE by Irina Gannota”