The second Sunday of Great Lent in the Orthodox Church is dedicated to the commemoration of the 14th-century archbishop of Thessalonica, St. Gregory Palamas. Its celebration one week after the Sunday of Orthodoxy, which commemorates the 7th Ecumenical Council’s defense of icons, is due to the Church’s recognition that St. Gregory’s teachings represent a second “Triumph of Orthodoxy” (Father Alexander Schmemann, Great Lent). 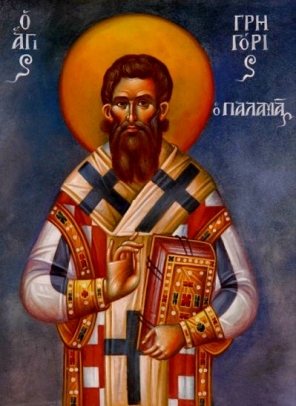 St. Gregory’s message was mostly apologetic, arguing on behalf of a spiritual experience historically grounded in the Church’s theology—not introducing anything new. He defended certain hesychast monks (from hesychia, meaning silence, stillness), who claimed they had encountered God’s uncreated light while in prayer.

Gregory’s main protagonist was a Latin theologian named Barlaam, who argued that direct experience of God was impossible, because God exists beyond all categories of being. Therefore, He can be known only through symbol or analogy. Gregory agreed with Barlaam that God’s transcendence placed Him outside the range of human understanding. Beyond this, though, they parted ways. Whereas for Barlaam, God’s transcendence was the end of the story, for Gregory and the hesychasts, there was an important sequel.

Gregory’s defense of the monks’ experience relied on his assertion (which he saw reflected in Scripture and Patristic tradition) that God is not captive to His transcendence any more than He is captive to the world of the things that we can know with our minds. God ultimately is not bound by either the rules of being or non-being. While those categories may be irreducible features of our own thought and rationality, for God they are as permeable as the walls through which the risen Christ passed when He appeared to Thomas and the other disciples.

Gregory recognized that God, at the point of His deepest reality, is knowable only by God Himself. Only He can know His own essence. (After all, how can something infinitely deep be comprehended by anything other than an infinite mind?) If we cannot look directly even at the sun, the source of created light on earth, how can our minds look upon the source of the light that is uncreated?

However, while knowledge of God’s essence remains beyond us, the radiance that proceeds from His glory is both the cause of our creation and the way in which He is ever-present to us. Like the sun comes to us through the radiation of its energies, so God comes to us through the radiation of His own divine energies. He is personally present in them. It is through these energies––God in His extraversion, God in ecstatic transcendence of His own essence—that creation itself is brought into being and sustained. It is through these energies that God comes to us in all the ways that He does.

This presence of God in His energies is what the monks had encountered, Gregory claimed. What they experienced confirmed the logic of the Incarnation, in which the barriers between God and created humanity are obliterated. Moreover, it was fitting that these monks experienced their encounter with uncreated light while engaged in prayer, and that they experienced it as an illumination within both their minds and bodies. This affirms that the entire human being—not just an isolated mental or spiritual faculty—is created, from the very start, for participation in these divine energies.

Despite our fall into sin, our redemption in Christ has restored the pathway to paradise, in which we, like our first parents, enjoy communion with God in the garden. The monks’ encounter with uncreated light reveals our own spiritual destiny, and the meaning of prayer itself, whether or not our experience precisely resembles theirs. The mysticism defended by St. Gregory is one in which God, who is above all, is nonetheless capable of manifesting Himself to us, and one in which we are capable of receiving Him.

One way of honoring St. Gregory, on this second Sunday of Lent, is to take seriously his vision of God and humanity. It has the potential to make sense of life’s struggles, and of the struggle we voluntarily enter into during the Lenten cycle. If God can come to us in our mortal existence, and we can offer ourselves to Him to be His temple, everything in our lives is put into perspective. Our bodies, our minds, the fabric of our own being, and of all created being—are all permeable to that light that shone before the world ever was.

To turn towards that light…that’s our Lenten prayer.

Check here if you are an Orthodox bishop, priest, monk, or nun and would like to write a Lenten reflection for us.