Our first interview with Father Martin appeared on August 22. We are delighted for this opportunity to touch base with him again.

With members of Scranton Inclusion, University of Scranton, Fall 2017

Giacomo: Hello, Father Jim! It’s so great to chat with you again. Thanks so much for making the time for us.

Giacomo: Briefly, how have things been going for you since we first chatted in August, especially with respect to Building a Bridge?

Father Jim: Well, since that time there has been a great deal more conversation about the book, both in the church in the public square. And, as you might have heard, the near hysterical reactions on a few far-right websites has led to the cancellations of several lectures, as well as protests and picketing at some of my talks. But, as for myself, I’m at peace with it all, which has been a great grace. After we chatted, in fact, I had a wonderfully consoling eight-day retreat, which helped to put everything into perspective. Retreats almost always do that.

Giacomo: Expand, if you will, on the more positive aspects of your book’s reception over the past five months since we first talked.

Father Jim: Certainly the standouts have been the encounters I’ve had with LGBT people and their families. After every talk, there are lots of hugs and lots of tears, and meeting so many wonderful Catholics who share their stories with me has been a huge blessing. In fact, just last week at Georgetown University, a college student surprised me by saying, “I came out as a lesbian to my friends and family, thanks to you.”

Also, I’ve noticed that the conversation around LGBT issues in the Catholic Church has increased since last summer. Now, I’m not sure if it’s because of the book per se, but whatever the reason, I’m happy to see the question of how to minister to LGBT Catholics is being discussed more. I’ve also noticed the increasing use of the term “LGBT,” even among some traditionalist Catholics, which I had tried to encourage (over and against “people afflicted with same-sex attraction”). And again, that’s all to the good.

Giacomo: And the more negative aspects?

Father Jim: Well, the hate and vitriol online have, if anything, increased since August. It really is the most extraordinary thing. As I’ve noted before, the book is based on the Gospels, and does not contradict any church teaching. And its message is basic: treat LGBT people the way that Catechism asks us to, with “respect, compassion and sensitivity.”

But that hasn’t stopped some of these far-right sites that traffic in hatred and homophobia from attacking the book, LGBT Catholics, and me. It usually takes the form of ad hominem attacks, falsehoods, innuendo, thinly veiled threats and, in general, absurdly unchristian behavior. Several of these sites, as well as individuals online, seem close to obsessed with the book, posting articles and videos several times a week, drawing up petitions to prevent me from speaking at different places, and whipping people into a rage so that they show up to shout things like “Fake priest!” All because of a book about respect, compassion, and sensitivity. You have to wonder where this obsession comes from.

I suppose it’s not surprising. There has always been homophobia in the church. But the way it’s expressed is really shocking. As a friend says, “See how they shove one another.”

Giacomo: From the leadership of the Jesuit order and the episcopacy you have received some significant endorsements, if not always for your specific views, at least for your efforts to promote a conversation on the lives and spiritual needs of LGBTQ Catholics. Have there been any negative statements by your brother Jesuits or by Catholic bishops?

Father Jim: There was one critical review from a Jesuit, and also from one or two Catholic bishops (one of whom admitted he hadn’t read the book), but most of the reviews have been positive. More to the point, besides the official ecclesiastical approval by my Jesuit superiors (the Imprimi Potest) and endorsements at this point from three cardinals, three archbishops, and three bishops, my Jesuit brothers have been incredibly supportive. It’s been tremendously gratifying and a great source of consolation for me. But it’s not surprising. Not simply because I’m a brother Jesuit, but because most of my brothers minister, or have ministered, to LGBT people in their roles as educators, retreat directors, chaplains, and so on.

Giacomo: Most recently you’ve earned the moniker of “scariest Catholic in America.” You’ve had speaking engagements canceled or relocated. You spoke to this fear the last time we chatted. Since then, have you gained additional insights or developed additional thoughts on this, given how things continue to unfold?

Father Jim: I would say that it shows how much homophobia still exists in the church. It’s been rather shocking. And, to be clear, I’m not surprised or bothered by thoughtful criticisms. The purpose of the book, after all, was to engender conversation. For example, a Jesuit friend called me up about some problems he had with the book and we had an honest conversation in which I think we both learned a lot.

What’s shocking are the websites that delight in personal vilification, calling me a “heretic” and “sodomite” and a “homosexualist,” whatever that means. So lots of name-calling. It’s pretty juvenile. Like being on the playground in third grade. Sometimes these groups seem so Catholic that they’re barely Christian.

Giacomo: Have the ongoing criticisms been offset for you by continued expressions of gratitude from LGBTQ Catholics and their families?

Father Jim: That puts it all in perspective. When an LGBT person or their parent or grandparent comes up to you and starts crying and says, as someone did recently, “I’ve never felt like I really belonged in the church until I read your book,” you think, “Why on earth should I care about a few websites?” What is all that to this? As I’ve said elsewhere, an ocean of hate is wiped away by just a few tears from a grateful LGBT person.

Giacomo: Those of us who want to have this conversation in the Orthodox Church face identical challenges, perhaps even more severe. From your own experiences do you have any words of encouragement for us? Can you speak to Orthodox bishops and priests who are afraid to express their support for our efforts openly? 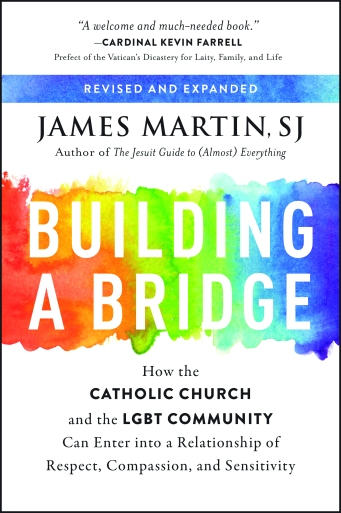 Giacomo: Tell us about your revisions in Building a Bridge, and when it’s due for release.

Father Jim: I’m very excited about it, and grateful that HarperOne agreed to bring it out so soon after the original hardcover—it’s coming out in March, less than a year after the hardcover, which is unusual. It has 40% new material, which is mainly new stories—parables almost—from the lives of the LGBT people I’ve met. It also has a lengthy new introduction that addresses the most common questions and critiques about the book, and talks about the reasons behind the hatred it engendered. And it includes a great many facts and figures about LGBT people—violence against them, suicide, bullying, to put the topic in context. Finally, it includes more spiritual resources. I hope the revised and expanded version will be a real resource for people.

Giacomo: A slight shift in topic: Cardinal Reinhard Marx, Archbishop of Munich and chairman of the German Bishops Conference, is reputed to have come out in favor of blessing same-sex unions in church. Yet amidst the predictable uproar there has been some question of whether his remarks were even translated correctly. Would you like to address what he actually said, the reactions pro and con in Catholic circles, and your personal views on his statement?

Father Jim: His remarks seem straightforward to me. The reactions have been predictable. Some people think it’s a pastoral step forward, others the end of the world. It’s a reminder that in Europe these things are thought about quite differently. In the last Synod of Bishops, for example, Cardinal Christof Schönborn, Archbishop of Vienna, praised a man he knew in a same-sex marriage. So the church thinks differently about these issues elsewhere.

Giacomo: What are your closing thoughts?

Father Jim: I feel like I’ve gotten to a point where I’m really at peace with all of it—even the personal attacks. They don’t make a claim on me interiorly. So I’m grateful for that grace.

Giacomo: We want you to know that the editors at Orthodoxy in Dialogue and a great many of our Orthodox readers stand behind you in your efforts. Thank you once again for spending a little time with us today.

Father Jim: Thanks. I appreciate and need both your support and prayers.

You can pre-order the revised and expanded paperback edition of Father Martin’s Building a Bridge here.

James Martin, SJ, is a Jesuit priest, editor at large of America, the Catholic magazine, and consultor to the Vatican’s Secretariat for Communication, a post to which he was appointed by Pope Francis in 2017.  He is the author of numerous books, including the New York Times bestsellers Jesus: A Pilgrimage and The Jesuit Guide to (Almost) Everything.

Giacomo Sanfilippo is a PhD student in Theological Studies at Trinity College in the University of Toronto and an editor at Orthodoxy in Dialogue. His “Father Pavel Florensky and the Sacrament of Love” is scheduled to appear in the upcoming issue of The Wheel.

More articles on this and related topics are listed under “Sexuality and Gender” in our Archives by Author.