Yesterday we published Halya Coynash’s “Russia-Backed ‘Cossack’ Fighters Take Oath in Moscow Patriarchate Church,” in which she references an April 2015 study entitled, “When God Becomes the Weapon.” The study was produced jointly by the  Center for Civil Liberties (CCL) in Kyiv and the International Partnership for Human Rights (IPHR) in Brussels.

Despite its being almost three years old, this study sheds important light on Russia’s ongoing low-grade war against Ukraine and the role of the Moscow Patriarchate in the Kremlin’s geopolitical aggressions.

Here we share a few key excerpts. The link to the full 22-page PDF is provided below. 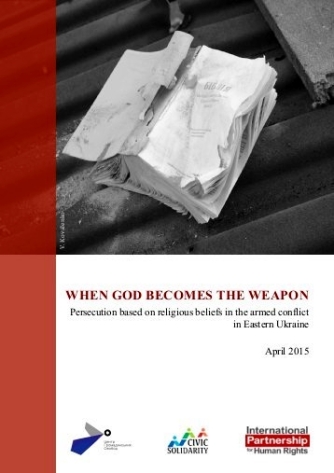 The Center for Civil Liberties (CCL) was established in May 2007 to promote human rights and the values of democracy and solidarity in Ukraine and Eurasia. The NGO is based in Kyiv, Ukraine. Last year, the Center for Civil Liberties began documenting human rights violations during the EuroMaidan events and subsequently in Crimea and Donbas. CCL conducts this work by deploying mobile groups to different parts of the liberated areas in Donbas to gather and verify information on human rights abuses.

International Partnership for Human Rights (IPHR) is a non-profit organization based in Brussels. Founded in April 2008, its mandate is to support local civil society groups in their work to eradicate violations of human rights and help their concerns and efforts be heard at the international level. Currently, the IPHR team is investigating war crimes and crimes against humanity in Ukraine by interviewing victims of violence, inspecting sites of conflict and collecting evidence. The goal is to collect enough substantial evidence to fight against impunity for those committing human rights abuses and to help victims seek just satisfaction through legal proceedings at national and international levels.

Together, CCL and IPHR field teams have gathered numerous testimonies, evidence and  proof of various crimes against humanity and war crimes that took place in eastern Ukraine during 2014-2015. Abductions, torture and other ill treatment, indiscriminate shelling and persecution for expressing individual views are among the atrocities that currently take place in the conflict zone. Analysis of these crimes has revealed the systemic and widespread character of persecution based on religious beliefs. Moreover, careful examination of many cases has shown that religion is one of the key motivations and justifications for criminal activity by the illegal paramilitary groups in the so-called Donetsk and Luhansk People’s Republics.

Following the occupation of Crimea by the Russian army in March 2014, the Russian-backed paramilitary groups seized control of several cities in the Donetsk and Luhansk regions and proclaimed the territories as the Donetsk People’s Republic (DPR) and the Luhansk People’s Republic (LPR). The Ukrainian government responded by launching an Anti-Terrorist Operation in the region, sending National Guard troops and volunteer battalions to liberate the territories. With Russian military, financial and political support, the pro-Russian paramilitary groups held their positions and this military conflict remains unresolved.

Prior to the conflict, the religious make-up of Ukraine could be described as diverse, with a relatively religious population and freedom to practice one’s faith of choice. In May of 2014 the so-called DPR declared the Orthodoxy of Moscow Patriarch[ate] as the main religion of the region. This has led to attacks on churches, cases of abduction, torture and other ill treatment as well as the murder of clergy members and the prohibition of religious practice other than that of the Orthodoxy of Moscow Patriarch[ate] in the region. Unlawful armed groups, under the banners of the Russian Orthodox Army and the Cossack Army, openly manifest their adherence to orthodoxy and have begun a “crusade” across the Donbas region. Evidence has come to light that several priests of the Ukrainian Orthodox Church of Moscow Patriarchate have, to varying degree, supported these unlawful paramilitary groups in their campaign against representatives of Protestant, Evangelical and Catholic Churches and Orthodox believers who do not recognize the Moscow Patriarch[ate].

Ukraine’s religious landscape is generally characterized as diverse with many religious believers and a high level of religious tolerance. Out of the estimated 45.5 million inhabitants, 67% declare themselves to be believers and almost three-quarters feel that every religion should be respected. For the majority of Ukrainians, religion is an internal spiritual matter, and is therefore valued as an important part of the traditional and cultural context, rather than an institutionalized faith.

According to the same poll, about a quarter of people who declared themselves to be Orthodox identify with the Ukrainian Orthodox Church of Kyiv Patriarchate (UOC-KP) and the Ukrainian Orthodox Church of Moscow Patriarchate (UOC-MP); less than 1.5% adhere to Ukrainian Autocephalous Orthodox Church (UAOC), while 41% declare themselves as “Simply Orthodox”. The three Orthodox churches are identical in their doctrine. The difference between them lies in their political views, with UOC-MP taking a pro-Russian stance, while the UOC-KP and the UAOC are pro-Ukrainian in persuasion.

The Ukrainian Greek Catholic Church (UGCC) is the largest non-Orthodox church, claiming an estimated 5.7% of believers, while the Roman Catholic Church congregation is estimated to attract 1.4% of worshippers.

Independent research agencies estimate the Muslim population at 500,000, with the large ethnic group of the Crimean Tatars accounting for the majority of this. There are an estimated 103,600 Jews in the country, but some local Jewish leaders estimate the number of persons of Jewish heritage to be as high as 370,000.

In March 2014, the heads of the largest churches and religious organizations in Ukraine, with the exception of the Moscow Patriarchate of the Ukrainian Orthodox Church [emphasis ours], released a joint statement denouncing the allegations of Russian media: “In our country there is no harassment on the basis of language, nationality or religion. Therefore, we testify that all attempts of Russian propaganda to represent the events in Ukraine as a ‘fascist revolution’ and ‘the victory of extremists’ are completely untrue”.

Shortly afterwards, the Ukrainian Council of Churches and Religious Organizations (UCCRO) also released an official statement after the request by Russian President Vladimir Putin to send troops to Ukraine was formally approved by the Russian Parliament: “Bringing of foreign military forces to Ukraine is a threat not only for our country but for the peace and tranquility on the European continent as a whole.” The Council also underlined that it recognized the current government of Ukraine as legitimate.

The Moscow Patriarchate of Ukrainian Orthodox Church has generally avoided taking sides, denouncing aggression by both parties and calling for peace.

In August 2014, Patriarch Kirill wrote an open letter addressed to the Ecumenical Patriarch Bartholomew I, the most senior cleric of the Orthodox faith, in which he called the war in Donbas a religious war.

In his letter, the Moscow Patriarch accused representatives of the Ukrainian Greek Catholic Church and Protestant leaders of propagating hatred toward the Orthodox Church, taking over Orthodox shrines and attempting to eradicate orthodoxy from Ukrainian territory ever since autumn of 2013. He also accused the “uniates” and the “schismatics” [UGCC and Protestants] of taking up arms against the Orthodox clergy in the course of combat events in the east of Ukraine.

Initially published by the Department of Public Church Relations of ROC [the Russian Orthodox Church] and circulated by the popular Russian portal “Orthodoxy and the World”, the letter was later removed from the Church’s official press center site.

The heads of UGCC and the UOC-KP have denounced accusations by the Moscow Patriarch as unfounded and lacking any substantial proof. The head of the UOC-KP also denied claims that the war in Donbas is a religious war, instead calling it a war between Russia and Ukraine that has an “occupational character”.

Although the Russian Orthodox Church, like the Kremlin, has officially denied any role in stirring up or exacerbating the turmoil in Ukraine, evidence of close ties between the Moscow Patriarchate and the pro-Russian cause has accumulated since the pro-Russian combatants took over Ukrainian territories in the east in the spring of 2014.

Among the unlawful armed groups on the territories of the self-proclaimed DPR and LPR, two main Cossack battalions are using the canonical orthodoxy in their rhetoric. They fight under religious-themed banners, proclaim themselves to be defenders of Christianity and of the Russian World, terrorize religious communities, confiscate church property, and imprison and murder clergy. Open sources and witness testimony indicate that these armed groups also have local support from the clergy of UOC-MP and ROC.

In general, the Cossacks act as an ethno-cultural organization. The Russian Orthodox Church has a special Synodal Committee for the Cooperation with Cossacks and there is also a Council for Cossacks Affairs under the patronage of the President of the Russian Federation. The organization claims to defend orthodoxy and Russian World values, and its rhetoric has strong undertones of xenophobia and violence. As an example, Battle Gnomes, a paramilitary camp where young Cossacks are taught to use guns, was established in Crimea in 2010 under the patronage of the Synodic Committee of ROC.

The Russian Orthodox Army, one of the most active unlawful paramilitary groups, also propagates Orthodox motives. Their motto is “Warriors of the faith, brothers of the Great Russia, we will unite the whole Southeast”, and their flag depicts a Christian cross. The unlawful paramilitary group was formed in February 2014 and proclaimed former Russian military officer Igor Girkin (Strelkov) as its leader. Countless cases of grave crimes (kidnappings, torture, ill-treatment and murder) were alleged to have occurred in their headquarters in the city of Sloviansk, which pro-Russian military groups occupied from April to June 2014.

Many priests in the Donetsk and Luhansk regions provide moral and spiritual support for the unlawful armed groups that have committed human rights abuses and violated the law in their persecution of Ukrainian authorities and citizens who express pro-Ukrainian opinions. Much photo and video material has been circulated on the internet portraying priests sanctifying flags, check-points, and fire-arms, and blessing the actions of the fighters against the “sinners”, “schismatics” and “American agents”.

Only the believers of Moscow Patriarch[ate] Orthodoxy are free from persecution and are able to practice their religion freely [emphasis ours]. Moreover, the Orthodox religion is used as an ideological foundation of ‘state building’ by the rebel groups and anything that is non-Russian Orthodox is seen as alien.

The scale and magnitude of the attacks that the civilian population is subject to in the southeastern parts of Ukraine, is sufficient to qualify them as crimes against humanity as defined in international law. Monitors dispatched by CCL and IPHR were able to collect evidence which proves that non-Orthodox believers have been subject to murder, torture, forcible transfer, imprisonment and severe deprivation of liberty in violation of the fundamental rights set out in international law. Since the conflict began, dozens of places of worship have been seized and are currently under the control of paramilitary groups. The increasing frequency of physical attacks have forced believers to flee or to practice their religion in secret.

The full study “When God Becomes the Weapon” can be read and downloaded here.

4 thoughts on “WHEN GOD BECOMES THE WEAPON: PERSECUTION BASED ON RELIGIOUS BELIEFS IN THE ARMED CONFLICT IN EASTERN UKRAINE by Victoria Cooper, Alexandra Novitchkova, Mariia Tomak, and Svitlana Valko”