Orthodoxy in Dialogue has published previously on the emerging focus of Orthodox theology on disability, especially with attention to people with autism. (See Monica Spoor and Charlotte Riggle in the alphabetical section of our Archives.) We applaud the clergy and laity of the Dormition of the Virgin Mary Greek Orthodox Church in Southampton NY for this wonderful and inspiring initiative. We have also published on St. Mary Antiochian Orthodox Church‘s homeless ministry in Wichita KS. Both of these projects reflect a Gospel theme so central to the writings of the Fathers and Orthodox spirituality, that of serving Christ by meeting the needs of our brothers, sisters, and siblings who bear His image. May these two parishes serve as a model for other Orthodox parishes, monasteries, and institutions around the world.

The present article appeared yesterday at Religion News Service with a different title. 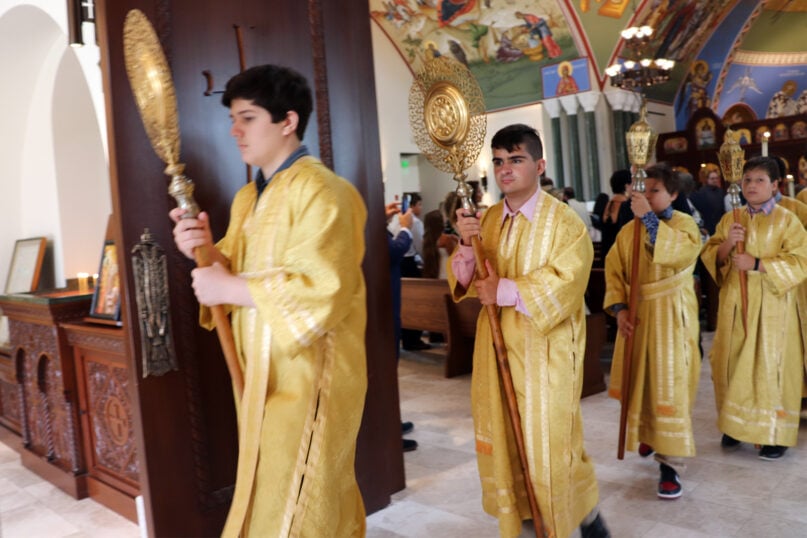 Dimitri Donus, second from left, processes as an altar server during a service at

Dormition of the Virgin Mary Greek Orthodox Church of the Hamptons in Southampton, New York,

US Autism Homes provides an extended circle of friends through a private-public partnership involving the Dormition of the Virgin Mary Greek Orthodox Church of the Hamptons.

Dressed in the yellow robes of an altar server, Dimitri Donus dutifully held the tall, golden sacramental fan as he processed with other acolytes during the Divine Liturgy on a recent Sunday at his Greek Orthodox church in this resort town on Long Island’s east end.

Later, he joined other church members for a meal, munching on fried chicken, corn on the cob and cornbread. Then, along with his housemates and their caregivers, he traveled a half-hour by van and set out on a small boat for an afternoon sail.

Donus is one of a handful of residents of a house run by US Autism Homes for young adults with autism through a private-public partnership involving the Dormition of the Virgin Mary Greek Orthodox Church of the Hamptons. At the 5,000-square-foot house a six-minute walk from the church, he has a place to live and an extended circle of friends beyond his immediate family.

“For breakfast, I ate eggs and English muffins and bacon,” said Donus, 20, quickly ticking off the foods he enjoys, especially one: “Blueberries, 160 days in a row.”

“For breakfast, I ate eggs and English muffins and bacon,” said Donus, 20, quickly ticking off the foods he enjoys, especially one: “Blueberries, 160 days in a row.”

His independence has brought changes big and small to the lives of her son and his three housemates since 2020, when they slowly transitioned from their parents’ homes to share space together in the house outfitted for them.

The arrangement is the inspiration of Dr. Lisa Liberatore, who left her Manhattan ear, nose and throat medical practice to devote herself full time to US Autism Homes and a second nonprofit focused on autistic adults. In 2015, Liberatore and her husband, Dr. Dimitri Kessaris, a urologist, founded Luv Michael, a granola company named for their son and co-founder Michael Kessaris, now 24, who is autistic.

Adelle M. Banks, production editor and a national reporter, joined RNS in 1995. An award-winning journalist, she previously was the religion reporter at the Orlando Sentinel and a reporter at The Providence Journal and newspapers in the upstate New York communities of Syracuse and Binghamton.

Click here to learn about Orthodoxy in Dialogue’s project to help a young couple in Nigeria expecting their first child.