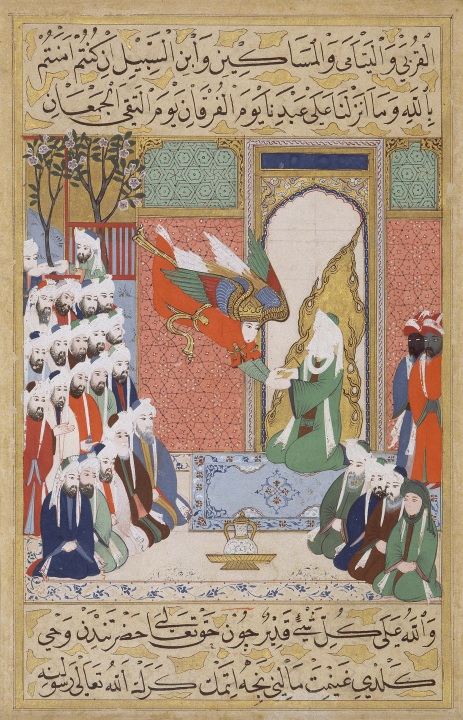 In his 8th-century refutation of Islam, The Heresy of the Ishmaelites, St. John Damascene laid the foundation for future Eastern Orthodox polemics against Islam and its founder, the Prophet Muhammad. John criticizes Muhammad’s moral character, accusing him of devising the religion of Islam—a Christian heresy by the saint’s estimation—for his own personal gain. Throughout the following centuries, prominent Orthodox Christian writers, from St. Gregory Palamas to St. Justin Popović, continued to attack Muhammad’s moral character, frequently claiming that he had spread Islam by the sword and had commanded his followers to do likewise. Such a view was perhaps inevitable given that Arab and Turkish conquests of Byzantine lands were often portrayed by Muslims themselves as the realization of the Prophet’s military goals. Even the Ottoman conquest of Constantinople in 1453 was interpreted as fulfilling one of Muhammad’s prophecies in the hadith. To this day, Muhammad is often looked upon by Orthodox Christians as someone who stood in total opposition to our faith.

Yet, such a perspective is challenged by an examination of the Qurʾan and prominent Islamic traditions concerning the Prophet Muhammad. Far from categorizing Christians as some sort of godless infidels, the Qurʾan bestows upon them the special status of ahl al-kitab, or People of the Book. Along with Jews, Christians are called People of the Book by the Qurʾan because they have received a divine revelation. Muslims believe that God gave the Torah to Moses, the Psalms to David, and the Gospel to Jesus. Even among the People of the Book, the Qurʾan shows special favour to Christians, saying, “Thou wilt find the nearest of them in affection toward those who believe to be those who say, ‘We are Christians.’ That is because among them are priests and monks, and because they are not arrogant” (Q 5:82). Although Islam takes issue with certain fundamental Christian beliefs, such as Jesus’s divinity or the Holy Trinity, Christians themselves are usually looked upon favourably.

According to Islamic tradition, Muhammad even turned to Christians during some of the most difficult times for him and his community. For example, after receiving his first revelation from the angel Gabriel, Muhammad is said to have become extremely distraught and not even his beloved wife and confidante Khadija could fully ease his troubled mind. It would not be until his wife’s cousin, a Christian by the name of Waraqa, declared him a prophet who had been visited by the same angel as Moses that Muhammad was able to regain his peace of mind and accept his calling. Later, when the early Muslims faced persecution from the polytheist Meccans, Muhammad, fearing for his followers’ safety, instructed them to seek sanctuary in Abyssinia, whose ruler, the Negus, was a Christian and could be trusted to help them. However, the Muslims were followed there by their Meccan persecutors, who attempted to convince the Negus to deport the refugees. But after listening to the Muslims chant Qurʾanic verses about the Virgin Mary, the Negus and his bishops were moved to tears and wholeheartedly agreed to protect them.

Although Muslims would later clash with the Byzantines on the battlefield, Muhammad and his early followers lamented the defeat experienced by the Byzantines at the hands of the Zoroastrian Persians at Jerusalem in 614 (or perhaps the prior year at Damascus). According to Islamic tradition, the very idea that Christians, a People of the Book, could be bested in battle by followers of a non-Abrahamic religion was deeply troubling to Muhammad. The Meccans, however, took advantage of the situation, using the Byzantine defeat to try to break the resolve of the Muslims by claiming that they would defeat Muhammad and his followers just like the Zoroastrians had defeated the Christians. In response, God is said to have revealed the Qurʾanic sura entitled al-Rum, or The Byzantines. The sura begins by acknowledging the Byzantine Empire’s recent setback but says that it will soon prevail over its Persian rival (Q 30:1-5), bringing comfort to Muhammad and his persecuted followers. Muslims believe that the Qurʾanic prophecy was fulfilled by Emperor Heraclius’ decisive victory over the Persians at the Battle of Nineveh in 627. The Byzantine triumph would also lead to the recovery of the True Cross from the Persians, and the eventual return of the holy relic to Jerusalem—an event commemorated annually by the Orthodox Church as part of the Feast of the Exaltation of the Cross.

It is also believed that Muhammad was even willing to share his own house of prayer with Christians. While in Medina, the Prophet received a deputation of Christians, including a bishop, from Najran. While we do not know exactly what church these Christians belonged to, Ibn Ishaq’s Sirat Rasul Allah tells us that they were of the “Byzantine rite” (1982, p. 271). Moreover, when the Christians had no place to perform their prayers, Muhammad allowed them to use his mosque. There the Christians prayed in peace, as the Prophet commanded that no one should disturb them. It is also worth noting that the mosque the Christians prayed in was none other than al-Masjid al-Nabawi, the second holiest mosque in Islam. However, the meeting between the Najrani Christians and Muhammad did not go without any tension, as the Prophet tried to convince them to embrace Islam by attempting to disprove Jesus’ divinity. Although the Christians rejected his offer to convert, Muhammad respected their decision and the two sides parted on good terms.

The above examples of Muhammad’s affection and respect for Christians should inspire Orthodox Christians to take a fresh look at the Islamic prophet. While the Orthodox Church has made great progress in its relations with other Christian traditions through dialogue, study, and even joint prayer, it has much further to go in terms of its relations with Islam and Muslims. Although there are perhaps many reasons for this, a critical one seems to be an unwillingness to look beyond our own historical prejudices, particularly those concerning Muhammad. For how can the Orthodox Church have fruitful relations with Muslims if it sees the founder of their religion primarily from the perspective of outdated polemics? Thus, it is crucial for Orthodox Christians to re-examine Muhammad and his teachings by engaging honestly and fairly with Islamic sources. Seeing the Prophet Muhammad in a new light will undoubtedly lead to greater mutual respect and understanding between Orthodox Christians and Muslims.

Andrew James Matthews holds a Certificate in Orthodox Christian Studies and a Master of Arts in Theology, Ministry, and Mission from The Institute for Orthodox Christian Studies in Cambridge UK. His work focuses on comparative theology between Orthodoxy and Islam. He blogs at Journeying Between Constantinople & Mecca, is a tonsured reader in the Orthodox Church, and resides in Toronto, Canada. He has written previously for Orthodoxy in Dialogue.

PLEASE NOTE: Contributions to Orthodoxy in Dialogue’s GoFundMe campaign to support a gay African refugee fleeing homophobic violence in his home country have slowed to a trickle. While his one-time expenses settling into his new life of freedom in Canada have been largely met for the moment (more will be incurred when the winter weather sets in), continued funds are urgently needed to cover his basic expenses of daily living, especially the cost of providing two square meals a day. (He is temporarily staying rent-free in a bedroom set up in our editor’s living room.) Please click here to consider helping out.