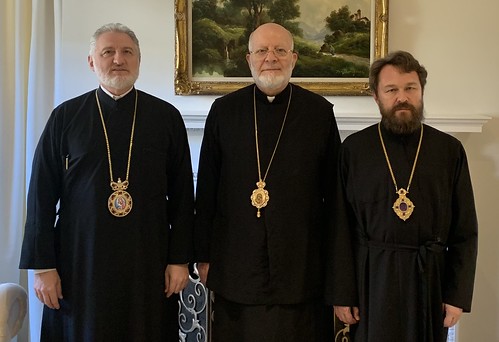 After a lunch offered by Metropolitan Joseph, the three hierarchs met privately to exchange views on the current inter-Orthodox situation.* At the end of the meeting the two visiting hierarchs exchanged memorable gifts.

*Editor’s note: The “current inter-Orthodox situation” refers presumably to the grant of autocephaly to the Orthodox Church of Ukraine by the Ecumenical Patriarchate over against the objections of the Moscow Patriarchate. See the extensive Ukraine section in our Archives for context.

This brief report appeared earlier today on the website of the Antiochian Orthodox Christian Archdiocese of North America. Visit the website for another photo.

One thought on “REPRESENTATIVES OF PATRIARCHATES OF CONSTANTINOPLE, ANTIOCH, AND MOSCOW MEET”