The following appeared yesterday as an op-ed at the Kyiv Post at the same time as our Metropolitan Epiphanius to Join Ranks of…Elie Wiesel and Mother Teresa? was going to press. 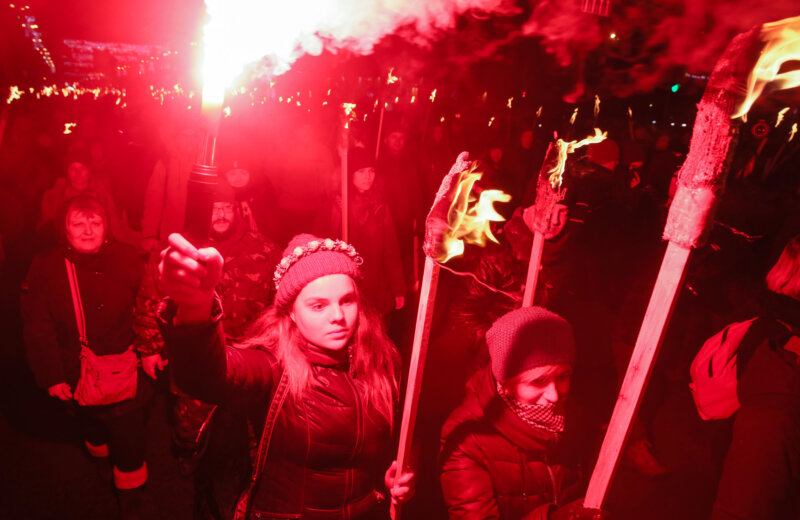 Ukrainian activists from Svoboda and Right Sector political parties carry torches as they march in Kyiv to mark the 110th anniversary of Stepan Bandera’s birth on January 1, 2019. (Photo by Volodymyr Petrov for the Kyiv Post.)

Apparently, I don’t stand alone among children, grandchildren, and great-grandchildren of Ukrainian immigrants in feeling alarmed at Metropolitan Epiphanius’ sympathy—or at least tolerance—for right-wing nationalist extremism within the ranks of the newly autocephalous Orthodox Church of Ukraine (OCU). I have addressed this issue twice for the Kyiv Post: first, on June 28 in Nationalist Extremism the Scourge of the Orthodox Church, and again, on August 6 in A Painful Tragicomedy Comes to an End…and Another Begins?

My article criticizing Epiphanius’ public embrace of Stepan Bandera’s legacy was well received on the Facebook page of the Australian Ukrainian Congress – National Advisory Council. Ukraine’s Open Orthodoxy Network (Мережа Відкритого Православ’я), on the other hand—seemingly not as “open” as it purports to be—has complied with my requests to post links to my articles which support the OCU and its Primate, but not to those which question things like his Banderite pride.

Orthodoxy in Dialogue hosts a discussion group on Facebook—and this is where, in response to my article on Metropolitan Epiphanius’ Banderite pride, our “stories from abroad” have begun to trickle in.

We have heard from a Ukrainian-American clergyman, scholar, and friend who suggests that Epiphanius was joking wryly when he declared in Lviv, “We are proud when they call us Banderites!” Yet such a tasteless “joke”—would we give a German bishop a pass if he “joked” about his pride in being called a Nazi?—seems hardly the stuff of a positive report on the OCU’s official website.

We have heard from a Ukrainian-Canadian woman whose uncle was murdered in his bed by Banderites while his pregnant wife was forced to watch. Her father was almost drowned in a lake by Banderites in Canada when a pair of boaters showed up inadvertently on the scene and frightened off the assailants.

We have heard from a Ukrainian-Australian man whose grandfather appealed to the Banderites in a Nazi labour camp for medication for his severely ill wife. They beat him and threw him down the stairs.

We have heard from a Ukrainian-Australian woman who is compiling scholarly and oral history on the atrocities committed by Stepan Bandera, his followers, and the Organization of Ukrainian Nationalists (OUN), not only against Jews and Poles, but also against fellow Ukrainians.

During my youth in the US, listening to the adults talk on the Ukrainian (and Orthodox) side of my family, I often came away with the impression that Ukrainians’ worst enemies were other Ukrainians. Yet I was raised from my earliest childhood memories to love Ukraine from afar, and to hope for the dawn of a new day of freedom in her history. It is a sadness of mine that my Ukrainian grandparents and my Ukrainian mother did not live to see the birth of independent Ukraine and of her autocephalous Church.

I am neither a historian nor competent to sort through the complexities of the darker side of the modern quest for Ukrainian identity and nationhood.

But I do know that, for many Ukrainian families around the world, the intergenerational wounds from those not-so-distant days remain painfully raw. Metropolitan Epiphanius needs to think twice before he makes any more ill-advised nationalist remarks—“joking” or otherwise. The Ukrainian Church under his leadership must become the place where national, family, and personal wounds can be, not ripped open again, but healed at last.

This healing—indeed this spiritual liberation—cannot begin as long as we peddle a false, sanitized narrative of our shared history as Ukrainians and as Orthodox Christians. The truth, as One said long ago, shall set us free.

Giacomo Sanfilippo is an Orthodox Christian of Ukrainian and Lemko descent on his mother’s side, a PhD student in Theological Studies at Trinity College in the University of Toronto, and the founding editor of Orthodoxy in Dialogue. He holds a BA in Sexuality Studies from York University and an MA in Theology from Regis College, both in Toronto, and is an alumnus of the Mark S. Bonham Centre for Sexual Diversity Studies at the University of Toronto. Earlier in life he completed the course work for the MDiv at St. Vladimir’s Orthodox Theological Seminary near New York City. See his complete list of articles for the Kyiv Post on his author page.

Click here to learn how to provide legal and humanitarian assistance to the refugees and asylum seekers at the US-Mexico border.

One thought on “ORTHODOXY, BANDERITE PRIDE, AND STORIES FROM ABROAD by Giacomo Sanfilippo”