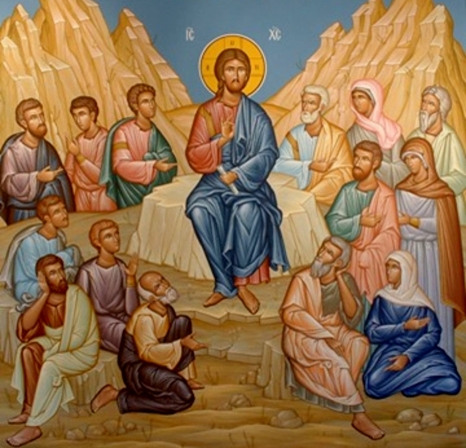 The Sermon on the Mount

I’ve been an Orthodox Christian my whole life. In spite of that, one of the problems I’ve had with religion is that it can—and sometimes does—lead to black and white ways of thinking which ignore the obvious moral complexities of the world, whether because one is unable or unwilling to deal with them. I’ve heard several theologians and philosophers talking about how it would have been sinful to lie to the Gestapo to protect a Jewish neighbor: because lying is wrong or a sin in certain circumstances, so it must be in every circumstance.

One cannot say that lying is wrong, and expect this to be true in every situation— regardless of one’s circumstances, state of mind, or motive—any more than one could say that because you might be justified in punishing your children when they misbehave, it would be fine to punish them when they do nothing. That kind of view of the world should be seen by any rational person as far too simplistic, and obviously wrong.

This, I believe, stems from a literalistic reading of Scripture and Tradition, one which sees these as some kind of universal rule book, rather than divine revelation inspired by the God who transcends time, but interpreted by fallible humans who view what they were given through their own cultural lens.

This brings me to another problem. A lot of Christians try so hard to rationalize certain problematic passages in Scripture, as if they could make those passages mean something other than what they obviously mean. They even try to justify those passages, as if they would be perfectly moral by modern standards.

Take, for example, the command in Ephesians for slaves to be obedient to their masters (6:5-8). Many Christians try to rationalize this passage, usually by using the passage from Galatians: “There is neither Jew nor Gentile, neither slave nor free, nor is there male and female, for you are all one in Christ Jesus” (3:28). They take this to mean that the Bible does not, in fact, condone slavery, but I honestly don’t see how that follows from the text. I don’t even see how these two passages are related at all.

The passage in Galatians does not call for some kind of slave revolution or egalitarian society, as much as I might want it to. It merely speaks theological truths, i.e., that we’re all equal before Christ. This is how it has been read historically.

This is because we all interpret divine revelation through our own cultural lenses and experiences. One could not simply read Scripture uncritically and think that what was acceptable for humans two or three thousand years ago should be acceptable universally: for better or worse, culture constantly evolves. We certainly can’t try to live our lives by 1st-century moral values. We couldn’t even try to live them by 19th-century moral values without losing a big part of what makes us us. I don’t see why we should want to. I don’t believe that, by somehow constraining God to one time period, we somehow magnify Him.

That is not to say that there is nothing of morality to be learned from Scripture. Some moral lessons are culture-dependen. For example, if we started stoning people for using the Lord’s name in vain, we’d be without politicians. Some are universal, like loving your neighbor, caring for the poor, etc. Yet others are radical even for our own time, for how many of us can honestly say that we love our enemies?

But that is the nature of Christ, I suppose. He is an anomaly in every age. As a moral voice, in His own age, He must have been quite shocking, even to His own followers. I can honestly say that many of His followers, back then and today, fail to even try to live up to His standards.

At the end of the day, I strongly believe that we cannot hope to look at Scripture as some kind of universal rule book. Indeed, if such a rule book even exists, I have yet to find it.

But we can look at Scripture as containing a hierarchy of themes, with the main ones being love, inclusion, charity, and faithfulness. At the center of the Gospel we have the Beatitudes, which transcend the commandments of the Law and all moralism.

Đorđe Milutinović is a 23-year old Orthodox Christian born in Kosovska Mitrovica, Kosovo. He lives with his mother and brother in Raška, Serbia, and studies English language and literature in the Faculty of Philosophy at the University of Priština in Kosovska Mitrovica.

See our Patrons page for instructions if you wish to support our work financially as a one-time, occasional, or monthly contributor.

One thought on “THE CULTURAL RELATIVITY OF MORALITY by Đorđe Milutinović”