This article appeared yesterday as an op-ed at the Kyiv Post. 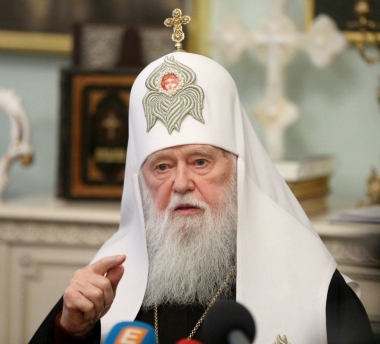 On June 24 the Holy Synod of the Orthodox Church of Ukraine (OCU) convened to address Filaret Denysenko’s schismatic activities which culminated in his uncanonical “church council” of the preceding week. Those who read Ukrainian can peruse the press release on the OCU’s official website.

As early as January 26, I sounded the alarm on these pages that trouble lay ahead. On May 14, I wrote that the time had come to suspend Denysenko from all episcopal prerogatives and duties—which would have included even the right to preside over divine services—and to depose him permanently if he persisted in his rebellion against proper church order. Again on June 17, I urged the OCU Synod to take preemptive disciplinary action against Denysenko before his council could take place three days later.

The Synod’s lack of decisive action prior to Denysenko’s council, and its reluctance to take the ultimate canonical step at its disposal even after the council, baffles the OCU’s supporters outside of Ukraine almost as much as Denysenko’s compulsion to sabotage the very Church that he shepherded right up to the eve of its autocephaly on January 5.

The painful isolation in which the Ukrainian Church continues to live for the foreseeable future, and the outright scorn heaped upon her by anti-Ukraine Russophiles everywhere, all but guarantee that her naysayers will cackle with glee at each of her missteps and misfortunes.

Denysenko isn’t stupid: he knows this. Yet he has devoted the last months to doing everything in his power to make the OCU look foolish and ineffectual in the eyes of the world, both within and beyond the Orthodox Church. Not only are his antics reported widely in the secular and religious press outside of Ukraine, but on July 1 and 3 he gave interviews to Ukraine’s ZIK TV in which he assails the OCU while supporting the idea of a patriarchate parallel to his own for the Ukrainian Greek-Catholic Church. ZIK’s acquisition a month prior to these interviews by pro-Russia politician Taras Kozak—precipitating the resignations of its editor-in-chief, CEO, production director, and a number of journalists—makes clearer than ever before that Denysenko has neither the interests of the Church nor of Ukraine at heart, but only his own narcissistic pretensions.

Denysenko was invited to attend the Synod on June 24 to retract his actions and become reconciled to the legitimate Ukrainian Church. He did not.

The gig is up. The time for making concessions for Denysenko’s old age has passed. For the present and future well-being of the Ukrainian Church, he must be deposed without further delay.

See the extensive Ukraine section in our Archives by Author & Subject.

Giacomo Sanfilippo is an Orthodox Christian of Ukrainian and Lemko descent on his mother’s side, a PhD student in Theological Studies at Trinity College in the University of Toronto, and the founding editor of Orthodoxy in Dialogue. See his author page at the Kyiv Post for the complete archive of his op-eds there.

Please visit our Patrons page for instructions on how to become a one-time, occasional, or monthly supporter of Orthodoxy in Dialogue’s work. Our readers’ support is greatly needed and deeply appreciated.