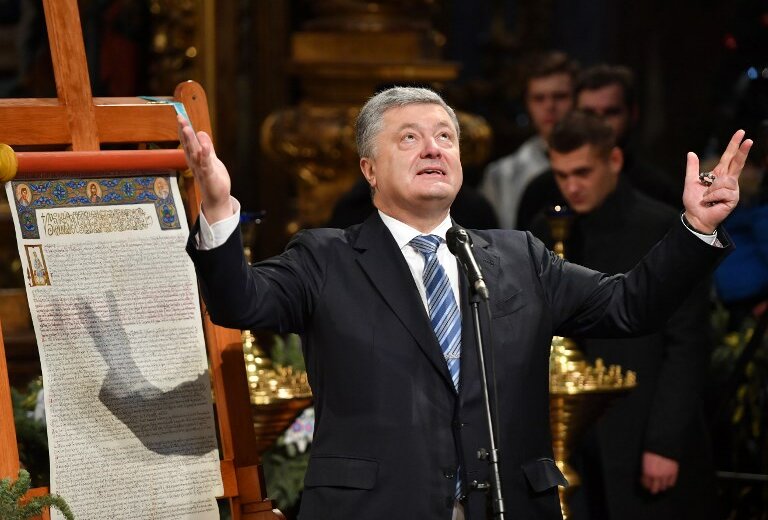 With the calligrapher’s ink and the Patriarch’s signature barely dry on the Tomos of Autocephaly, growing numbers of Orthodox Christians in the West have had about as much as we care to see of President Poroshenko’s irrepressibly impish grin front and centre of everything.    To be clear, I mean those of us who support Ukraine’s independence from Russia. We wish very much to see the nation thrive politically, economically, culturally, and spiritually. Yet the optics of Mr. Poroshenko’s minute-by-minute ubiquity in what should have begun as—and should remain—strictly an ecclesiastical matter are just as troubling as the questions left unanswered by this ongoing spectacle.

First and foremost of these questions is whether Mr. Poroshenko truly represents Ukraine’s gradual embrace of the best of Western civic ideals—among these a broad separation of church and state—or little more than the Ukrainian version of Putinism and 21st-century “Byzantine symphonia” à la russe as soon as the opportunity arises. One is hard pressed to discern much difference between the media’s photos and videos of Putin and Patriarch cozying up to each other a little too close for comfort and those of Poroshenko and Metropolitan. Frankly, the overzealous characterization of Mr. Poroshenko as “the new St. Volodymyr” has caused at least as many shudders around the Orthodox world as  that of Mr. Putin as “a miracle of God.”

From his misplaced invitation to the Ecumenical Patriarch to visit Ukraine (only the Primate of the autocephalous Orthodox Church of Ukraine has the prerogative to do that) to the insipidness of his statement following the January 7 Liturgy at St. Sophia’s Cathedral in Kyiv that “the Nativity is primarily a family holiday” (it isn’t), Mr. Poroshenko demonstrates time and again that he should leave the Church’s governance and theology in the hands of her hierarchy, clergy, monastics, and theologians, and limit his activities as President of Ukraine to the governance of the nation—the whole nation, with all the diversity and complexity of its citizenry.

In my most recent essay for the Kyiv Post I noted,

The question with which Mr. Poroshenko must come to terms with absolute clarity, both in his own mind and in full view of the nation, is whether he envisions himself as a president for all Ukrainian citizens regardless of ethnicity, language, religion, political party, sexual orientation, and gender identity—as any Western head of state aspires in principle to be—or simply the president for Orthodox citizens…and only those who support his preferred Church and his naked conscription of said Church to advance his upcoming re-election bid.

Metropolitan Epiphanius must likewise come to terms with similar questions. Does he shepherd a Church for all Orthodox citizens and inhabitants of Ukraine regardless of ethnicity, language, and political party, or just for supporters of Mr. Poroshenko’s presidency who plan to vote for him on March 31? Will the Metropolitan advocate for the human rights of all Ukrainian citizens and inhabitants, and not just those of his flock? In time, how will this newly autocephalous Church fare under a different presidency, say, that of an attendee of a Moscow Patriarchate parish, or a Greek Catholic, or a Protestant, or a Jehovah’s Witness, or a Muslim, or an atheist, or a member of Ukraine’s LGBTQ community? Byzantine symphonia by any other name is still Byzantine symphonia—and in a 21st-century secular democracy it comes with far greater risks for both church and state than it ever entailed in Byzantium.

The principle of church-state separation—an ideal never perfectly actualized, of course—creates a relational structure in which each finds the freedom to operate within its own sphere without the undue interference of the other. For the Church, this allows the use of her moral authority and prophetic voice to address the inevitable injustices of state power against the most defenseless of its citizens. For the state, this ensures that “Christian moralism” narrowly defined not become the basis for legislating the lives of those outside the Church. The Church does well to remember that her spiritual power in Christ is revealed most perfectly in worldly weakness (cf. 2 Cor 12:9).

My foregoing remarks may seem harsh, even “anti-Ukrainian.” Raised on the undying hope of Ukrainian liberation from foreign oppression since my earliest childhood six decades ago—and rejoicing in the fact of Ukrainian autocephaly if not in the messy details of how it is playing out—I can assure my readers of my lifelong love for the land and people of my maternal grandfather’s birth. I offer my thoughts here in the spirit of tough love.

This article appeared on January 13, 2019 in a slightly edited version at the Kyiv Post.

Giacomo Sanfilippo is an Orthodox Christian of Ukrainian and Lemko descent on his mother’s side, PhD student in Theological Studies at Trinity College in the University of Toronto, founding editor at Orthodoxy in Dialogue, and contributor of religious commentary at the Kyiv Post.  Earlier in life he completed the course work for the MDiv at St. Vladimir’s Orthodox Theological Seminary.

One thought on “IT’S TIME TO STAND DOWN ALREADY, MR. POROSHENKO! by Giacomo Sanfilippo”