Orthodoxy in Dialogue is sharing this announcement as part of our wider commitment to raising awareness of the plight of, and collecting funds for, the homeless and the hungry in our midst—among the least of Christ’s brothers and sisters whom He singles out at the very centre of our responsibility to care for the suffering world where He has placed us. Speak to your parish priest to ensure that your congregation take part in this effort on Sunday, February 3. With only three weeks to go, share this post widely among your social media contacts.

Yet remember that the hungry are hungry every day of the year, and that our personal duty to give alms must be fulfilled every day of our lives. 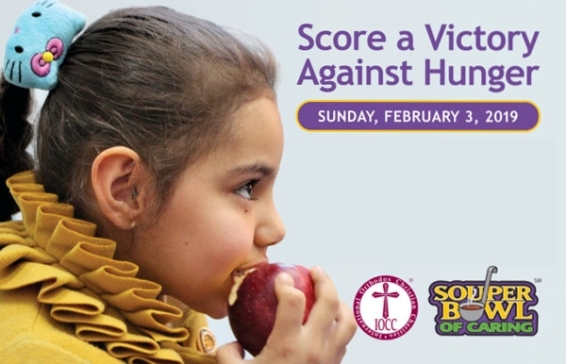 This year’s 21st annual Souper Bowl Sunday—it’s name reflects the anticipated Super Bowl on the same day—aims at rallying parishes and their youth to champion feeding the poor and caring for those in need around the world.

A variety of resources — posters, bulletin inserts, and announcements — is available on the IOCC web site to generate a “team spirit” in the weeks leading up to the first Sunday of February.

Established in March 1992 as the official humanitarian organization of the Standing Conference of Canonical Orthodox Bishops in the Americas — today’s Assembly of Canonical Orthodox Bishops of the United States of America — IOCC, in the spirit of Christ’s love, offers emergency relief and development programs to those in need worldwide, without discrimination, and strengthens the capacity of the Orthodox Church to so respond.  By God’s grace, IOCC enables those suffering and in need to continue to improve their own lives and communities and to have the means to live with dignity, respect, and hope.  Since its inception, IOCC and its partners have provided over $600 million in relief and self-help programs to people in more than 60 countries.  Current programs focus on emergency relief, agriculture and food security, education, health, water and sanitation, and economic opportunity in Syria, Greece, Ethiopia, Tanzania, Uganda, the Balkans, the United States and elsewhere.  IOCC celebrated it’s 25th anniversary in 2017.

This announcement appeared earlier today on the website of the Orthodox Church in America (OCA). It seems odd that the Assembly of Canonical Orthodox Bishops—of which IOCC is an official organization—has neither promoted this initiative on its website nor posted anything at all in six weeks.