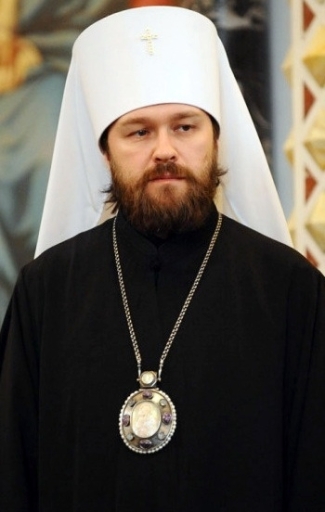 Earlier today, Orthodoxy in Dialogue editor Giacomo Sanfilippo’s maiden op-ed, Worse Than 1054? A Schism of Moscow’s Own Making, appeared at the Kyiv Post, Ukraine’s award-winning English-language newspaper. He shows that Kremlin and Patriarchate in Russia must be taken at their word when they announce to the world their intention to speak with one voice—Byzantine symphonia in the 21st century.

This suggests that we in the West would do well to greet everything that the Moscow Patriarchate has to say with the same wisdom of serpents and innocence of doves as we do anything issuing from the Kremlin. Clocking in at a brief 800-some words, Sanfilippo’s article is worth a read as a preface to the paragraphs below.

Metropolitan Hilarion (Alfeyev) of Volokolamsk is perhaps one of the Orthodox Church’s most recognizable figures on the world stage today. Chairman of the Moscow Patriarchate’s Department for External Church Relations (DECR), he travels around the globe as the Russian Orthodox Church’s main representative in both inter-Orthodox and ecumenical affairs. Nothing appears on the DECR website without his explicit approval, and by extension, that of Patriarch Kirill at whose pleasure the Metropolitan serves.

Earlier today the DECR published a report with the very long title, His Holiness Patriarch Kirill Sends Letters to Religious Leaders, Senior Statesmen and Heads of International Organizations Regarding the Pressure Exerted by the Ukrainian Authorities on the Ukrainian Orthodox Church [Moscow Patriarchate] and the Government’s Interference in the Ecclesiastical Life in Ukraine. It begins:

His Holiness Patriarch Kirill of Moscow and All Russia sent messages to the Primates of the Local Orthodox Churches; Pope Francis; Archbishop of Canterbury Justin Welby, head of the Anglican Communion; Rev. Dr. Olav Fykse Tveit, General Secretary of the World Council of Churches; Mr. António Guterres, United Nations Secretary-General; Mr. Thomas Greminger, Secretary General of the Organization for Security and Co-operation in Europe; as well as to H.E. Mr. Emmanuel Macron, President of France; and H.E. Mrs. Angela Merkel, Chancellor of Germany as heads of the Normandy Four states.

It goes on to accuse the Ukrainian government of starting large-scale persecutions of Ukraine’s bishops, clergy, monastics, and laity who wish to remain under the canonical authority of the Russian Orthodox Church following the Unification Council scheduled to take place in Kyiv’s St. Sophia Cathedral tomorrow, December 15 (see here and here), and the subsequent grant of autocephaly to the Orthodox Church in Ukraine by the Ecumenical Patriarchate of Constantinople (see here, here, and here).

Significantly, these “large-scale persecutions” of Ukrainian citizens by their own government have been reported nowhere else except in Patriarch Kirill’s letter and the DECR report.

Equally significantly, Patriarch Kirill has never called upon the Kremlin to cease its ongoing war against Ukraine and its incremental annexation of Ukraine’s sovereign territory. As Jonathan Luxmoore reported (here) in October, Patriarch Kirill rejects not only the idea of an autocephalous Ukrainian Church, but even of an independent Ukrainian nation.

In a twist of supreme irony, the Moscow Patriarchate has only proven the need for the Ukrainian Church to break free from its canonical control, even as the Ukrainian nation liberates itself from the Kremlin’s political and military stranglehold.