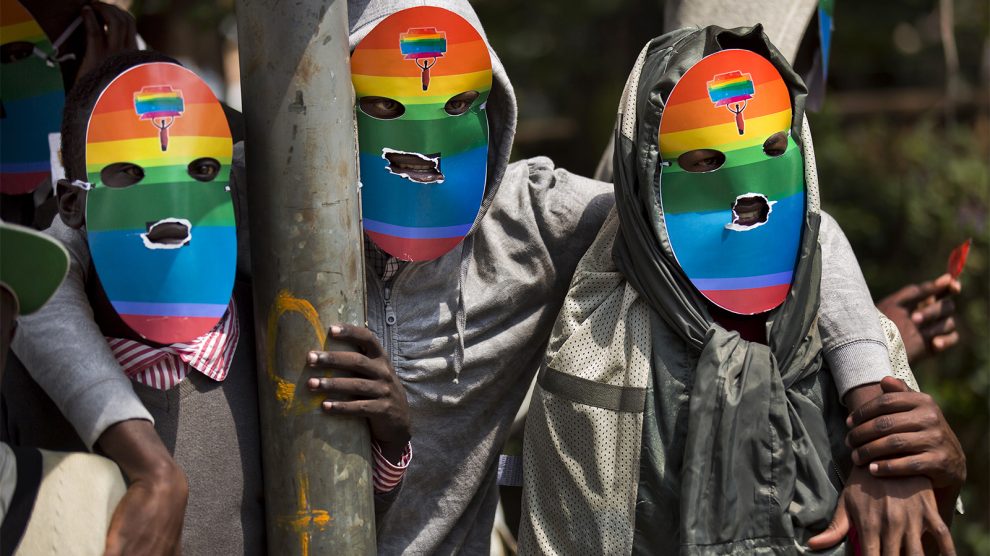 Two days ago we republished a report on Tanzania’s Cardinal Pengo by New Ways Ministry’s Robert Shine under the headline of African Cardinal: Better to Die of Hunger Than to Accept Foreign Aid Attached to Gay Rights. In it Mr. Shine cites a November 30 article at the AMECEA News Blog, a presumably reliable source of information on the Association of Member Episcopal Conferences in Eastern Africa.

[Cardinal Pengo] thanked the Tanzanian Government for its position on the matter [of homosexuality] while stressing that all Tanzanians should say no to homosexual [sic] which apparently is encroaching very fast in African countries.

It should be noted that recently, the Minister for Internal Affairs, Kangi Lugola, stated that homosexual acts should be shunned by every human being created in the image of God because the act is against human nature and consequently the Government of Tanzania will not accept it.

Cardinal Pengo becomes the second bishop in Tanzania to condemn homosexuals in public.

What, precisely, is the Tanzanian government’s “position on the matter” for which Cardinal Pengo expresses his gratitude?

Not a week later, we have our answer to this question, as reported by Religion News Service in its December 5 LGBT People Flee Tanzania amid Police Crackdown by Doreen Ajiambo:

As he gulped water and sat tired in the shade of a harsh sun in this northern town of Tanzania, Joseph Omar said he was crossing the border to seek a safe haven in neighboring Kenya after the government began to arrest suspected homosexuals in his country.

“I’m fearing for my life — they don’t want us to stay here,” said Omar, 28. “The gay community is very scared because police are breaking into homes of suspected homosexuals and arresting them. I don’t want to be the next person. I’m going into hiding.”

Omar is among hundreds of gay and transgender people in this East African nation who are increasingly fleeing to neighboring countries after authorities urged the public in October to report the names of suspected homosexuals to police so they can be detained.

In early November, 10 men were arrested on the island of Zanzibar on suspicion of being gay. Police said the public reported a planned gay wedding at a resort hotel at Pongwe Beach on Africa’s east coast.

The arrests and panic within the gay community come days after Paul Makonda, governor of the economic capital Dar es Salaam, formed a police squad to hunt down gay people and urged the public to report suspected homosexuals.

“Give me their names,” Makonda, a close ally of President John Magufuli, urged the public during a news conference on Oct. 29. “I have received reports that there are so many homosexuals in our region, and these homosexuals are advertising and selling their services on social media. My ad hoc team will begin to get their hands on them.”

Homosexuality is illegal in Tanzania under a colonial-era law and can be punished by a sentence of up to 30 years’ imprisonment. However, the law is rarely enforced. But anti-gay harassment has increased since Magufuli came to power in 2015, sending hundreds into hiding across the border.

Activists have said religion plays a role in increasing the stigma within the gay community. Evangelicals, the Pentecostal church and other religious groups have an anti-homosexual agenda, they said.

James Wandera, founder of LGBT Voice Tanzania, an organization that openly promotes LGBT rights, said Makonda, the senior government official who ordered the anti-gay crackdown, is a staunch believer in the Word of God. Wandera said there’s no other group in Tanzania trying to support the LGBT community and the situation is getting worse.

“We have no option than to hide until things get better,” he said. “The gay community is living in fear and some have escaped to other countries. But we are ready to defend those who have been arrested by the government.”

Makonda is a Christian. Recently, he attended prayers at a Pentecostal church in Dar es Salaam and wept in prayer asking God to help him in the fight against homosexuality, according to local news reports.

“I have come here to pray so that God gives me divine powers to fight against homosexuality,” Makonda said as he broke down in tears before a large congregation. “I believe in prayers and I know God will answer my prayers as I tackle this issue.”

Wandera dismissed Makonda’s prayers, saying he was planting hate between citizens and the gay community by using religion.

“Makonda has succeeded to make people believe that LGBT people are bad and they can’t live with others,” he said. “He should not use religion or the law to separate citizens because of their sexual orientation and gender identity.”

The tension in the country has prompted the United States and international organizations to censure the East African country for violating human rights and civil liberties.

“The United States government is deeply concerned over escalating attacks and legislative actions by the Government of Tanzania that violate civil liberties and human rights,” the U.S. Department of State said in a statement posted Nov. 9. “We are troubled by the continued arrests and harassment of marginalized persons, including lesbian, gay, bisexual and transgender people and others who seek to exercise their rights to freedom of speech, association and assembly.”

Omar, who was at Isebania at the border with Kenya, pleaded with the authorities to understand it’s not his wish to be gay.

“I didn’t choose to be gay, and God knows,” he said as he crossed the border to Kenya. “I will go back to my country when the situation calms. I don’t want to die or be jailed.”

In the comfort of our Western living rooms we imagine “gay rights” as the right to marry. Yet in other parts of the world our LGBTQ brothers and sisters yearn simply for the right to live.

When will the Christian churches—Catholic, Orthodox, Protestant—repent of their complicity in violence against queer people and rally to the defense of our fellow human beings?

When God came in human flesh as the Virgin Mary’s baby Son, and grew to adulthood, how did He react when a woman was about to be put to death for her sexual sins? Until the churches and their Medievally begowned spokesmen learn to imitate Christ in every way, they have no part in Him.