This article takes its place in our Faith & the Arts series. 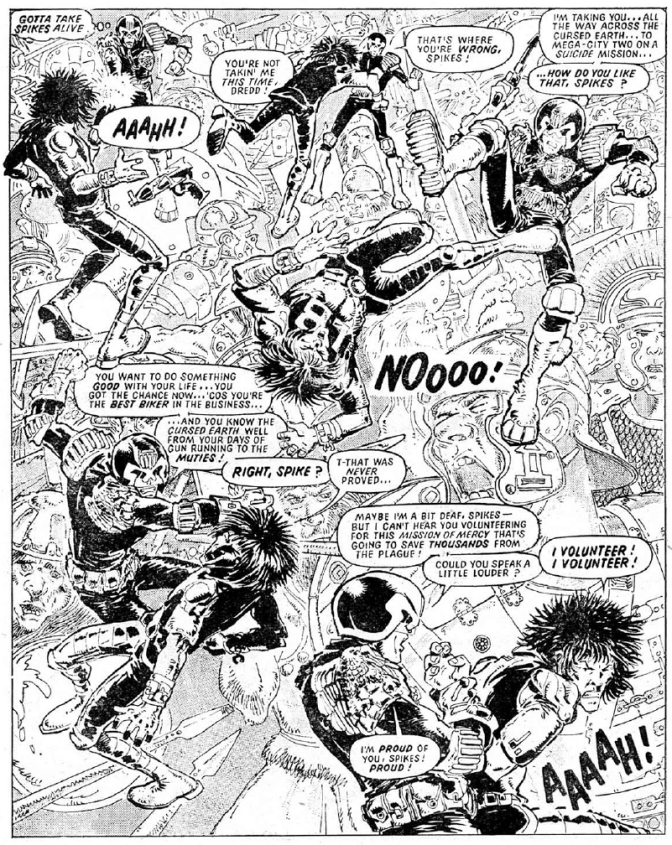 I had been hesitant to write anything for Orthodoxy in Dialogue. I’m aware that its editorial staff and target audience are people with, or studying for, doctorates, while my highest level of educational achievement is a 2-year degree in data processing from my local community college. However, one trick I have learned from people more academically qualified than I am is that you can get away with a much lower level of academic rigor by putting the word “towards” in the title of your essay. So that’s what I’ve done.

I have long been fascinated by comics. They taught me to read at an early age, something I share with many other people, and I once tried (unsuccessfully) to start a line of comics aimed at adult literacy and English language learners.

But as an Orthodox Christian, my fascination runs deeper, as I sense much unfulfilled potential in the medium itself. Our Orthodox liturgical life affirms two art forms above all others: iconography and poetry, the latter as expressed in our hymns. It strikes me that comics are better placed than almost any other artistic medium to combine the two.

Unfortunately, the fact that comics have for so long been regarded as entertainment rather than art has blinded many to its potential. The Church has traditionally affirmed art, but has rightly been wary of entertainment as a form of distraction, a shiny bauble dangled in front of us to divert our attention from anything of value. At best it is tolerated as a didactic tool.

Back in the 1980s, when Watchmen and The Dark Knight Returns first propelled the idea of comics aimed at adults into the public consciousness, I was talking to the head of a leading UK Orthodox publishing company about the idea of Orthodox comics. He replied that, funnily enough, he had been thinking about a line of illustrated Bible stories for children. My heart sank. That wasn’t what I had in mind at all.

But what did I mean? In this article, I want to concentrate on the form of Orthodox comics, rather than the content: the way stories are told rather than the type of stories we tell. I believe that Orthodox liturgical art has two major qualities to offer comic art: freedom from temporal and spatial restraints, and a poetic way of thinking.

Freedom from Time and Space

The page at the top of this article has stuck with me ever since I first saw it at the age of 10. It comes from chapter two of the Judge Dredd story The Cursed Earth, written by Pat Mills, drawn by Mike McMahon and first published in 2000AD #62, cover date 29th April 1978.

Now, it’s highly unlikely that this was consciously inspired by Orthodox iconography. Mills is a pagan who was raised Irish Catholic and still bears the scars from the experience, while McMahon was a first generation punk rocker. He did, however, go to art school, and it is highly likely that he was exposed to artists like Picasso, who were influenced by icons. Furthermore, the purpose of the artwork is to excite, a far cry from the dispassion that the liturgical arts are designed to help us achieve.

But what strikes me about the page is the complete lack of the traditional panel borders. The images flow freely against the backdrop of a holographic diorama designed to teach history to 22nd-century schoolchildren (the scene takes place in a schoolroom). I wouldn’t have been aware of this as a 10-year-old; but looking at it now, I am reminded both of the great festal icons such as the Nativity icon, where non-contemporaneous events are depicted simultaneously, and of the blurring of time in Eugene Vodolazkin’s novel Laurus, where the narrative can move seamlessly from Medieval Russia to the Battle of Stalingrad and back again. I believe that such freedom is better suited to, if you’ll forgive the expression, Orthodox comics than the constraints of, say, Watchmen’s 9-panel grid.

The Poetic State of Mind

By “a poetic way of thinking” I do not necessarily mean that all dialogue and captions should be written in poetry (though I am about to embark on a project where I intend to do just that; pray for me). Rather, I mean that writing poetry involves a different way of thinking to writing prose, using symbol and metaphor rather than literal descriptions.

An example of this is the use of kennings common in Old English and other Germanic verse. Germanic verse relied on alliteration rather than rhyme as its primary organising principle. I am not sure to what extent this forced poets to adopt phrases like “the whale’s road” instead of “the sea”, but it is easy to imagine a poet in 9th-century Wessex thinking, “Well, I can’t think of a word beginning with s to alliterate with sea. Hmm…what lives in the sea and begins with w? A whale! I will call it the whale’s road!”

Such a way of thinking, poetic rather than prosaic, is not unique to comics. It should be the default mode for any Orthodox Christian working in the arts. I would say that applying it to comics involves this symbolic way of thought penetrating both the script and the art. Alexander A. Bogolepov, in his introduction to Orthodox Hymns of Christmas, Holy Week and Easter (Russian Orthodox Theological Fund, 1965) says that “The hymns for each Feast have a distinct cluster of ideas and figures which in connection with the events being commemorated bring to mind the various aspects of Christian salvation.”

Orthodox comics provide us with a unique opportunity to combine two “distinct clusters of ideas and figures,” those of our iconography and those of our hymnody. How we do so is up to individual writers and artists. But it strikes me as a far more satisfying way of “baptizing the culture” than yet another book of illustrated Bible stories for children.

See our call for articles if you would like to write for our Faith & the Arts series.

Nick Xylas is an Orthodox Christian and writer of comics and, occasionally, pulp fiction. He is currently seeking an artist and a publisher for the project mentioned in this article. He resides in the United Kingdom.

3 thoughts on “TOWARDS A THEOLOGY OF COMICS by Nick Xylas”