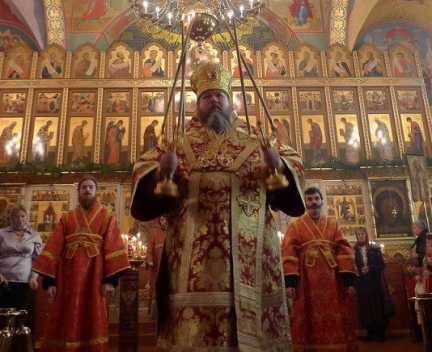 On October 12 Fort Russ News published a panic piece by “Metropolitan Jonah”—last name omitted, even parenthetically—entitled MANY THOUSANDS WILL DIE – The Coming Schism in Orthodoxy: “Repent, and Stop this Insanity” (all caps in the original for paranoiac effect).

It’s hard for me to take the mystique confected by Metropolitan Paffhausen’s unkempt beard and hair and his white klobuk too seriously. I’ve known him since around 1984, when he was just Jim, a 25-year old convert and SVS graduate (or about to graduate) who pined endlessly after the winsome Susan S.

Susan was a fellow parishioner at St. John of Damascus Church in Poway CA. She rented a room in my family’s house around the time that my wife and I had our third child. Jim wanted me to talk Susan into going out with him. His misplaced interest made her laugh out loud in disbelief.

Any official vita that portrays Metropolitan Paffhausen on a straight trajectory from chrismation to seminary to monastery to the primatial throne of the Orthodox Church in America is simply not accurate. On the way to the monastery he tried assiduously to find himself a wife and to become a married priest with kids.

Following his “resignation” as Primate of the Orthodox Church in America in 2012, it was reported that Metropolitan Paffhausen retained a lawyer and threatened the Holy Synod with legal action unless his demand for release to the Russian Orthodox Church Outside of Russia was granted. It was also reported that the OCA released him to ROCOR with the proviso that he never be given an episcopal assignment. Six years after his forcible resignation and no longer a member of the OCA, he continues to style himself Metropolitan of All America and Canada on his currently active “public figure” Facebook page.

I mention these things because I think it’s important to dispel the myth that anything other than a very ordinary man—with all his personal history, flaws, foibles, and yes, talents—can grow a beard and one day get to start blessing congregations with trikhiri and dikhiri. His “pronouncements” possess no more ex officio veracity than anyone else’s. No less than any other opinionator, he must be able to stand under the harsh light of a thorough scrutiny.

Metropolitan Paffhausen’s “MANY THOUSANDS WILL DIE” is fraught with so many misreprentations, gratuitous assumptions, and outright falsehoods that he should be ashamed of himself. Most shameful of all is his characterization of His All-Holiness, Ecumenical Patriarch Bartholomew of Constantinople, as a doddering old man easily pushed around by American interventionists. Patriarch Kirill of Moscow—allegedly a former undercover KGB agent for the Soviet Union (as reported by Christianity Today, among others)—is hardly younger.

I question whether neo-fascists make suitable bedfellows for an Orthodox bishop, and particularly an American bishop. Metropolitan Paffhausen might want to check the extensive White Supremacy and Racism section in Orthodoxy in Dialogue’s Archives by Author.

Earlier today Dr. Taras Kuzio published his Poroshenko Has Achieved a Second Independence from Russia on New Eastern Europe. His personal website leaves no doubt as to his academic and professional qualifications—certainly unmatched by anything that Metropolitan Paffhausen has to offer—to comment on the multiple angles of Ukrainian autocephaly:

Taras Kuzio is a Toronto-based leading international expert on contemporary Ukrainian and post-communist politics, nationalism and European integration at the Centre for Political and Regional Studies, Canadian Institute of Ukrainian Studies, University of Alberta and Non-Resident Fellow, Center for Transatlantic Relations (CTR), School of Advanced International Studies (SAIS), Johns Hopkins University. Taras Kuzio has been a political consultant to governments and legal and business consultant to the private sector on legal and economic questions. In 2010-2012, he was a Visiting Fellow at the Slavic Research Centre, Hokkaido University, Sapporo, Japan and an inaugural Austrian Marshall Plan Foundation Fellow at the Center for Transatlantic Relations, School of Advanced International Studies, Johns Hopkins University. He has been a Visiting Professor at the Institute for European, Russian and Eurasian Studies, Elliott School of International Affairs, George Washington University and Senior Research Fellow in the Centre for Russian and East European Studies at the University of Birmingham and Adjunct Research Professor, Institute for European and Russian Studies, Carleton University, Ottawa.

Taras Kuzio has also served as Head of Mission of the NATO Information and Documentation Centre in Kyiv, Ukraine. He is a member of the Editorial Advisory Board of Geopolitics, History, and International Relations and Demokratizatsiya and the author and editor of fifteen books, including Commissars into Oligarchs. A Contemporary History of Ukraine (2014), Open Ukraine. Changing Course towards a European Future (2011), Democratic Revolution in Ukraine (2011), From Kuchmagate to Orange Revolution (2009) and Theoretical and Comparative Perspectives on Nationalism (2007). He has authored five think tank monographs, including The Crimea: Europe’s Next Flashpoint? (2010) and EU and Ukraine: A Turning Point in 2004? (2003) and guest edited six special issues of Communist and Post-Communist Studies, Problems of Post-Communism, East European Politics and Society, Nationalities Papers and Journal of Communist Studies and Transition Politics. Taras Kuzio received a BA in Economics from the University of Sussex, an MA in Soviet and Eastern European Studies from the University of London and a PhD in Political Science from the University of Birmingham, England. He was a Post-Doctoral Fellow at Yale University.

I urge Orthodoxy in Dialogue’s readers on both sides of the question of Ukrainian autocephaly to read Dr. Kuzio’s article carefully and thoughtfully. It counters Metropolitan Paffhausen’s fanciful maunderings far more incisively than I am capable of doing.

Giacomo Sanfilippo is the grandson of an Orthodox priest and Ukrainian patriot born in 1887 in Rohatyn, in Ukraine’s present-day Ivano-Frankivsk Oblast. He is an editor at Orthodoxy in Dialogue and PhD student in Theological Studies at Trinity College in the University of Toronto.

See our extensive Ukraine section in our Archives by Author.

2 thoughts on “A RESPONSE TO METROPOLITAN PAFFHAUSEN RE: UKRAINE by Giacomo Sanfilippo (with Taras Kuzio)”