This is the third article in Orthodoxy in Dialogue’s Faith & the Arts series. 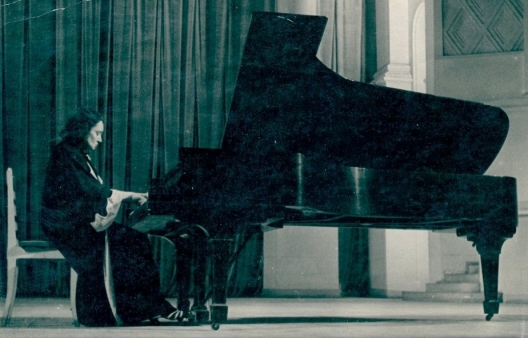 Armando Iannucci’s recent film, The Death of Stalin, briefly filled the two Moscow cinemas where it was being shown, but then was abruptly banned. The movie was described as an “unfriendly act by the British intellectual class” by Nikolai Starikov, head of the Russian Great Fatherland Party, and as part of a “Western plot to destabilize Russia by causing rifts in society,” by the head of the Public Council of the Russian Ministry of Culture.

In fact the film provides, in the form of a Dr. Strangelove-sort of black comedy, a remarkably accurate portrait of the end of Stalin’s ruthless reign and the subsequent battle for leadership among those in his inner circle. Though only Stalin looks like his historical self, the casting is superb. My only disappointment was the portrayal of the great Russian pianist, Maria Veniaminovna Yudina (Мария Вениаминовна Юдина).

In the film she is young and glamorous and, though despising Stalin, willing to make a special recording for him in exchange for a bribe of thousands of rubles.

The actual Yudina was very different. I have come to know her indirectly through the memoirs of her friend and one-time classmate, the composer Dmitri Shostakovich, as related by Solomon Volkov in his book, Testimony, and also through Tatiana Voogd, a founder of our Russian Orthodox parish in Amsterdam, who knew Yudina personally and even slept under her piano—“the most sheltered place in her apartment,” she told me.

Born to a Jewish family in 1899, Maria Yudina converted to the Orthodox faith at the age of 20. It was her fate to live through the Bolshevik Revolution (she was 18 at the time) and its aftermath, seeing many of her dearest friends and colleagues disappear into the Gulag. Fearlessly, even recklessly, she wore a cross even while teaching or performing in public—an affirmation of belief at a time when any display of religious faith could cost one’s work, one’s freedom, even one’s life. In contrast to the on-screen portrayal, she lived an ascetic life, wearing no makeup, spending little on herself, and dressing simply. “I had the impression,” said Shostakovich, “that Yudina wore the same black dress during her entire long life, it was so worn and soiled.”

For her, music was a way of proclaiming her faith in a period when printing presses were more stringently policed than pianos. “Yudina saw music in a mystical light. For instance she saw Bach’s Goldberg Variations as a series of illustrations to the Holy Bible,” said Shostakovich. “She always played as though she were giving a sermon.”

She would not only perform piano works but sometimes pause during concerts to read poetry by such writers as Boris Pasternak, himself unable to publish at the time. (Pasternak did the first reading of his novel Doctor Zhivago at Yudina’s apartment in 1947.)

Yudina was notorious among friends for her inability to keep anything of value for herself. Shostakovich recalled:

She came to see me once and said that she was living in a miserable little room where she could neither work nor rest. So I signed a petition, I went to see various bureaucrats, I asked a lot of people to help, I took up a lot of people’s time. With great difficulty we got an apartment for Yudina. You would think that everything was fine and that life could go on. A short time later she came to me again and asked for help in obtaining an apartment for herself. “What? But we got an apartment for you. What do you need another one for?” “I gave the apartment away to a poor old woman.”

Shostakovich heard from a friend that he had made a loan to Yudina of five rubles:

“I broke a window in my room, it’s drafty and so cold, I can’t live like that,” she had told them. Naturally, they gave her the money—it was winter. A while later they visited her, and it was as cold in her room as it was outside and the broken window was stuffed with a rag. “How can this be, Maria Veniaminovna? We gave you money to fix the window.” And she replied, “I gave it for the needs of the church.”

Shostakovich, who regarded religion as superstition, didn’t approve. “The church may have various needs,” he protested, “but the clergy doesn’t sit around in the cold, after all, with broken windows. Self-denial should have a rational limit.” He accused her of behaving like a yurodivye, the Russian word for a holy fool, a special category of sanctity.

Her public profession of faith was not without cost. Despite her genius as a musician, from time to time she was banned from concert halls, and not once in her life was she allowed to travel outside Russia. Shostakovich remembered:

Her religious position was under constant artillery and even cavalry attack [at the music school in Leningrad]. Serebriakov, the director then, had a habit of making so-called “raids of the light brigade”…. He realized that Yudina was a first-class pianist, but he wasn’t willing to risk his own position. One of the charges of the light brigade was made specifically against her. The cavalry rushed into Yudina’s class and demanded of Yudina: “Do you believe in God?” She replied in the affirmative. “Was she promoting religious propaganda among her students?” She replied that the Constitution didn’t forbid it. A few days later a transcript of the conversation made by “an unknown person” appeared in a Leningrad paper, which also printed a caricature—Yudina in nun’s robes surrounded by kneeling students. And the caption was something about preachers appearing at the Conservatoire. The cavalry trod heavily, even though it was the light brigade. Naturally, Yudina was dismissed after that.

From time to time she all but signed her own death warrant. Perhaps the most remarkable story in Shostakovich’s memoir concerns one such incident, dramatized inaccurately in the film:

In his final years, Stalin seemed more and more like a madman, and I think his superstition grew. The “Leader and Teacher” sat locked up in one of his many dachas, amusing himself in bizarre ways. They say he cut out pictures and photos from old magazines and newspapers, glued them onto paper, and hung them on the walls…. [He] didn’t let anyone in to see him for days at a time. He listened to the radio a lot. Once Stalin called the Radio Committee…and asked if they had a record of Mozart’s Piano Concerto No. 23, which had been heard on the radio the day before. “Played by Yudina,” he added. They told Stalin that of course they had it. Actually, there was no record, the concert had been live. But they were afraid to say no to Stalin, no one ever knew what the consequences might be. A human life meant nothing to him. All you could do was agree, submit, be a yes-man, a yes-man to a madman.

Yudina later told me that they had to send the conductor home, he was so scared he couldn’t think. They called another conductor, who trembled and got everything mixed up, confusing the orchestra. Only a third conductor was in any shape to finish the recording.

I think this is a unique event in the history of recording—I mean, changing conductors three times in one night. Anyway, the record was ready by morning. They made one single copy in record time and sent it to Stalin. Now that was a record. A record in yes-ing.

Soon after, Yudina received an envelope with twenty thousand rubles. She was told it came on the express orders of Stalin. Then she wrote him a letter. I know about this letter from her, and I know that the story seems improbable. Yudina had many quirks, but I can say this—she never lied. I’m certain that her story is true. Yudina wrote something like this in her letter: “I thank you, Joseph Vissarionovich, for your aid. I will pray for you day and night and ask the Lord to forgive your great sins before the people and the country. The Lord is merciful and He will forgive you. I gave the money to the church that I attend.”

And Yudina sent this suicidal letter to Stalin. He read it and didn’t say a word. They expected at least a twitch of the eyebrow. Naturally, the order to arrest Yudina was prepared and the slightest grimace would have been enough to wipe away the last traces of her. But Stalin was silent and set the letter aside in silence. The anticipated movement of the eyebrows didn’t come.

Nothing happened to Yudina. They say that her recording of the Mozart was on the record player when the “Leader and Teacher” was found dead in his dacha. It was the last thing he had listened to.

Shostakovich found Yudina’s open display of belief foolish, yet one senses within his complaints both envy and awe. In a time of heart-stopping fear, here was someone as fearless as Saint George before the dragon, someone who preferred giving away her few rubles to repairing her own broken window, who “published” with her own voice the poems of banned writers, who dared to tell Stalin that even he was not beyond God’s mercy and forgiveness. She had a large and pure heart.

No wonder her grave in Moscow has been a place of pilgrimage ever since she died, November 19, 1970.

Jim Forest is an award-winning author and international secretary of the Orthodox Peace Fellowship. His most recent book is At Play in the Lions’ Den: A Biography and Memoir of Daniel Berrigan, of which Orthodoxy in Dialogue has published a summary. See Jim & Nancy Forest for the complete list of his published titles. He is also a reader at St. Nicholas of Myra Russian Orthodox Church in Amsterdam.

Check our guidelines if you would like to write for our Faith & the Arts Series.

Please consider joining the Patrons of Orthodoxy in Dialogue to help us continue our work.

Blessed art Thou, O Christ our God,
who hast revealed the fishermen as most wise
by sending down upon them the Holy Spirit.
Through them Thou hast drawn the world into Thy net.
O Lover of man, glory to Thee.

One thought on “BRAVE PIANIST: MARIA YUDINA by Jim Forest”