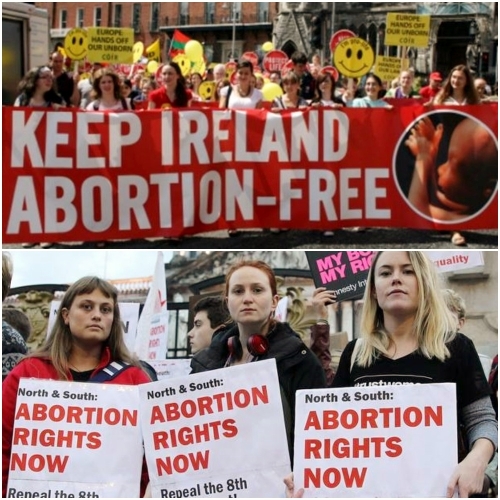 Today Ireland heads to the polls to decide whether to retain or repeal what are among the most restrictive abortion laws in the world. In an article by Harriet Sherwood, Emma Graham-Harrison, and Lisa O’Carroll earlier this morning, The Guardian reports:

As a result of the stringent controls on abortion, each year about 3,500 women travel abroad, mostly to the UK, to terminate their pregnancies – and an estimated 2,000 women illegally procure abortion pills online and self-administer them with no medical supervision.

These are the facts on the ground: abortion occurs—and has always occurred—regardless of its legal accessibility or inaccessibility, regardless of deeply ingrained social, cultural, and religious opprobrium.

The population of Ireland is 4.8 million, approximately 1/68th that of the United States. This means that Ireland would account for 374,000 abortions per year if it had the same population as the US—without providing legal access to it.

I first became aware of abortion at age 16 or 17—in 1971 or 1972—in the lead-up to Roe vs. Wade. Raised Roman Catholic by a mother who had been raised Orthodox (my grandfather was an Orthodox priest), at no point in my life have I ever questioned the premise that human life begins at conception and that abortion terminates the life of a preborn child: to me this is no less self-evident scientifically than it is theologically. Even during my four years as an atheist recently, I remained unshakable in my belief that a new human person begins to exist at conception.

The question hits close to home for me. My former wife’s first pregnancy entailed from the start a potential medical risk. A close family member from whom we expected better responded immediately to the news by insisting that we have an abortion. We were horrified. We went on to give birth to our now 36-year old son.

As a priest in and near Roblin, Manitoba from 1990 to 1995 I was a member and later president of the local right-to-life chapter, and a member of the provincial organization headquartered in Winnipeg. I spearheaded the creation of the local pro-life clergy association. I organized annual marches and the provision of brand new car seats for teen moms. I wrote once or twice on abortion for the local weekly, which led to my being interviewed by a major Winnipeg newspaper and a TV station that broadcast province-wide. I was invited to speak in Dauphin, a larger town an hour east of Roblin. I arranged for Matushka Juliana Schmemann to make a pro-life speech in a packed movie theatre after the women’s retreat that she led in our little mission parish.

Yet in all this pro-life activism I strove never to say or write anything to shame women. The two times during my short-lived priesthood that women confessed abortion to me—because for some reason they trusted me as they had not done previous priests—I never uttered a word of judgment, but stood beside them as their companion in their sorrow and their spiritual healing. Who was I, the first among sinners, to judge anyone?

Contrary to widespread misrepresentations, my beliefs about the beginning of human life and the moral imperative to protect the lives of preborn children remain unchanged. Orthodoxy in Dialogue is not now, nor has it ever been, uncritically “pro-choice.” No one has ever heard me say or seen me write the dubious expression “safe abortion,” for abortion is never safe for the child.

What has shifted—to some degree—is my answer to the “hard question for Christians” to which the title of this essay alludes: What’s to be done?

Orthodoxy in Dialogue’s publishing record speaks for itself:

In my first article on abortion (no. 2 above), I wrote:

Yet my immersion in gender, sexuality, and women’s studies—at a time when religious faith had completely lost its hold on me [my atheist period from 2008 to 2012]—made me more open than before to hearing the voices of women who had had, or demanded the legal right to have, an abortion. While remaining unshakably pro-life in my philosophical worldview, but no longer bound by all the rhetoric and polemic of institutional churchspeak and pro-life politics, I was also able to see past the equally distasteful institutional feminismspeak and pro-choice politics, with all its rhetoric and polemic, into the hearts and full humanity of women whose understanding of these things appeared to diverge so fundamentally from mine.

That exercise in nonjudgmental listening—in the encounter with those who seemed to stand in some ways at the extreme limits of “other” from me—continues to exert a profound influence on how I strive to engage, both in my outward behaviour and my inward disposition, with people opposed to some of my most basic assumptions about God, man, Christian faith, and human life.

Is there a way in which we as Church and as individual Christians can engage in a nonjudgmental, dialogical partnership with women and men across the ideological spectrum to save children’s and women’s lives whenever and wherever possible?

What’s to be done?

Although the tragedy of abortion weighs more heavy on my heart and soul than almost any other symptom of our collective sin before God—and not just the individual sin of individual women—I do not believe that the answer to this question lies in opposing the legalization of abortion. With utmost sorrow we must allow legalization to go forward.

And then the harder work, indeed the higher way, begins for us: to be prepared at all times to offer the same care to our sisters in Christ, our sisters in humanity, that we provide to our own bodies.

ADDENDUM: Later on May 25 The Irish Times reported a win for the vote to repeal the 1983 anti-abortion amendment in the Irish constitution by an astonishingly wide margin in both urban and rural areas.

Giacomo Sanfilippo is an Orthodox Christian, former priest, father of five, grandfather of two, and editor at Orthodoxy in Dialogue.

2 thoughts on “IRELAND AND ABORTION: A HARD QUESTION FOR CHRISTIANS by Giacomo Sanfilippo”