Orthodoxy in Dialogue applauds this initiative on the part of Archbishop Demetrios of the Greek Orthodox Archdiocese of America. Before this event was reported we published a tribute to Martin Luther King, “Black Lives Matter,” in which the author concludes as follows: “We and our readers continue to hope and pray that the Lord will raise up hierarchs—indeed a whole Assembly of hierarchs—who will speak with one voice and put their words into concrete action, following in the holy footsteps of Archbishop Iakovos.” With gratitude to Archbishop Demetrios for hosting the event, and to Metropolitan Tikhon of the Orthodox Church in America for his attendance (see photo album linked below), we see the gathering on the evening of Great and Holy Tuesday as an important step in this direction. 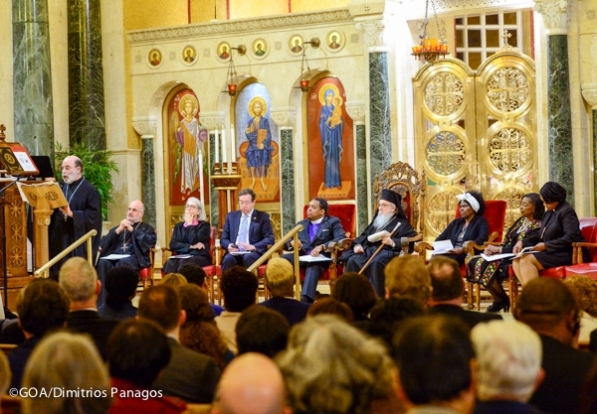 Archbishop Demetrios of the Greek Orthodox Archdiocese of America (centre)

On April 3, 2018, the eve of the 50th memorial of the assassination of the Rev. Dr. Martin Luther King, Jr., following the solemn Service of the Bridegroom of Holy Tuesday, His Eminence, Archbishop Demetrios, hosted more than 400 ecumenical leaders and guests at the Greek Orthodox Cathedral of St. Sophia, who had gathered in the nation’ s capital to advance efforts to end racism. The event, co-organized by the National Council of Churches of Christ in the USA (NCC), preluded a march from the MLK Memorial to a rally on the National Mall taking place the next morning, April 4.

The program included a welcome, greetings from the World Council of Churches and the NCC, an exhortation to ACT Now to End Racism, two Scripture readings, audio recordings of Rev. Dr. Martin Luther King, Jr., and Archbishop Iakovos, a chanted psalm, and a homily.

In his homily Archbishop Demetrios stated, “As we repent of our past, we must forgive ourselves, one another, and those who preceded us. This will be known when we can look into the eyes of others and not see our differences but rather Christ in all people.” He continued, “Those who went before us sacrificed a great deal, even their lives, to further the mission for racial equality. And while significant laws have been established and strides of social change should not be overlooked, we must continue down the path to reach the desired target. If we really believe that Christ is everything and in everything, we must keep walking beyond tolerance, push on past mere policies, and become icons of Christ.”

The event concluded with a sense of solidarity and renewed fervor for action. Archbishop Demetrios called the event “open-ended until we have fully eradicated racism.”

This report appeared originally on April 5 on the website of the Greek Orthodox Archdiocese of America. Republished with a few minor typographical revisions.

The complete photo album for the event may be viewed here.

Our “Black Lives Matter” contains the full text and video of Martin Luther King’s “I Have a Dream.”