At Orthodoxy in Dialogue we are thankful to God that the newly autocephalous Orthodox Church of Ukraine and the Ukrainian Greek-Catholic Church seek friendly relations and cooperation where appropriate. At the same time we dismiss the rumour that the OCU envisions entering into “double communion” with the Orthodox Church and Rome. 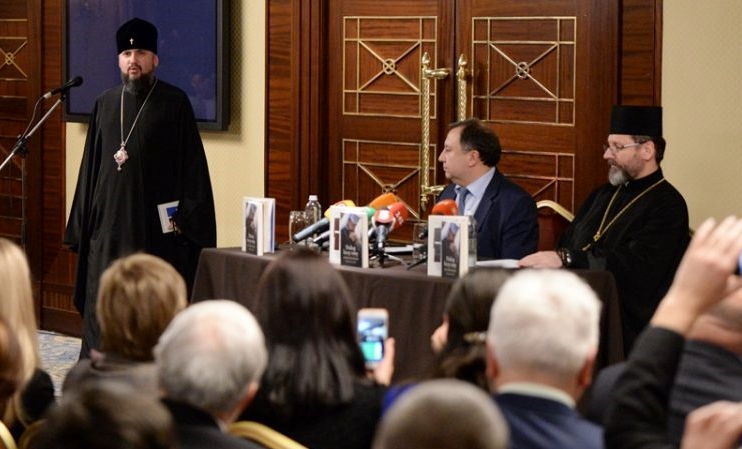 On the morning of January 17, 2019 in the Golden Gates Hall of the InterContinental Hotel there took place a presentation of the book Dialogue Heals Wounds, by the head of the Ukrainian Greek-Catholic Church (UGCC), His Beatitude Sviatoslav.

At the invitation of His Beatitude Sviatoslav, the primate of the Orthodox Church of Ukraine, Metropolitan Epiphanius, attended the presentation.

Leaders and moderators of the presentation were His Beatitude Vladyka Sviatoslav himself and Mr. Mykola Kniazhytsky, head of the Verkhovna Rada’s Committee on Culture and Spirituality. [Verkhovna Rada = Ukraine’s Parliament.]

In his greeting, His Beatitude Metropolitan Epiphanius underscored the importance of dialogue among Christians:

“We will begin the first steps of our cooperation, although before now we have also had cooperation. In the future we will also continue our dialogue and cooperation, for we Christians should do good together. We wish to begin a good and fruitful cooperation between the Orthodox and Ukrainian Greek-Catholic Churches, which existed earlier, but we wish to deepen it, so that we can work further together,” the Primate noted.

That evening Metropolitan Epiphanius also announced the date of his enthronement—February 3—and invited the head of the UGCC to this event.

In his book-interview His Beatitude Sviatoslav fully and sincerely gives credit to the editor of the Polish Catholic News Agency, Krzysztof Tomasik, for hitherto unknown facts on the past and present state of the Eastern Catholic Church. He shares the story of his life from the moment of his vocation to his election as head of the UGCC. He talks about the possibilities which arise as a result of dialogue, and also about the good but sometimes painful relations with neighbouring countries. In this little book we also find His Beatitude Sviatoslav’s testimony about St. John Paul II and the blessed memory of Liubomyr Huzar.

This brief report appeared earlier today in Ukrainian on the website of Єдина помісна Українська Православна Церква (One Local Ukrainian Orthodox Church). Translated for Orthodoxy in Dialogue by Giacomo Sanfilippo. SEE PHOTO ALBUM OF THIS EVENT AT THE SOURCE.