This marks Giacomo Sanfilippo’s third op-ed for the Kyiv Post. It appeared shortly after midnight Kyiv time on January 7. His articles at the Kyiv Post are archived here. 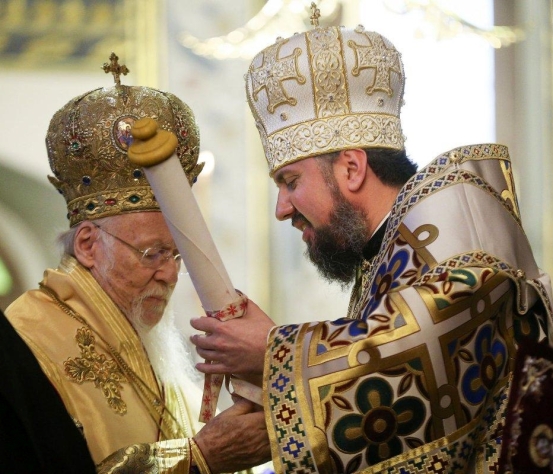 Every year on January 6 a paradoxical confluence occurs between the Orthodox Church’s two liturgical calendars. Most autocephalous and autonomous Orthodox Churches around the world celebrate today as Theophany, the culmination of the Nativity. Yet the Churches of Jerusalem, Russia, Serbia, Georgia, and Ukraine observe today as Christmas Eve—the very beginning of the Nativity.

Whether the Church of Constantinople is seen to deliver the Tomos of Autocephaly to the Church of Ukraine on the day of Theophany, as in the eyes of the grantor, or on Christmas Eve, as in the eyes of the recipient, it seems hard to miss the perhaps providential significance that this historic event should coincide with the Church’s commemoration of the divine-human epiphany embodied in the birth and baptism of Jesus Christ.

The timing of the Tomos with the inaugural acts of the invisible God’s self-disclosure in visible human form invites the Primate, hierarchs, priests, deacons, monastics, theologians, and laity of Ukraine to contemplate two facts as their Church receives her long-awaited autocephaly as a gift of the Holy Spirit: first, the sole purpose of the Incarnation as that of drawing the triune Creator and His creation—both human and nonhuman—into an everlasting communion of love; and second, the sole purpose of the Church as that of manifesting, perpetuating, preaching, and especially living this all-embracing communion of love in every concrete time and place where she finds herself planted like a vine by divine grace.

Historically, autocephaly has always and inevitably come underpinned by worldly geopolitics. One need only study the history of any given autocephalous Church to see this clearly. The Orthodox Church of Ukraine is neither unique nor singularly worthy of censure for the political exigencies which led to her creation last month in Kyiv and her full validation this morning at the Phanar.

As the grandson of an Orthodox priest born in Rohatyn in 1887, I know not only from my personal studies but also from my family’s oral history that Russia’s violence at the slightest sign of Ukrainian self-determination, and Russophile historical revisionism aimed at erasing any trace of Ukraine’s distinct ethnic, cultural, linguistic, historical, and ecclesial identity, date back much further than the current troubles.

In our own day, those most eager to cast stones at the infiltration of “Ukrainian nationalism” into the life of the Church turn a blind eye to the Russian nationalism that drives the Kremlin’s war against Ukraine—which has claimed more than 10,000 lives in four years—and the Security Service of Ukraine’s growing body of evidence of the Russian Orthodox Church’s complicity in that war and in anti-Ukrainian agitation in general. As Jonathan Luxmoore reported in October, Patriarch Kirill rejected the very idea of Ukrainian nationhood as a 19th-century Uniate plot in his remarks to Ecumenical Patriarch Bartholomew.

The gift of autocephaly comes as a “beautiful deposit” (2 Tim 1:14) entrusted to the Church of Ukraine from on high.

Ukraine’s Orthodox Christians must receive this gift in a spirit of humility, with no trace of triumphalism, and safeguard it through their faithfulness to the Gospel of love, forgiveness, reconciliation, and care for the other.

At the center of this Gospel stands the cross of voluntary self-renunciation for the sake of the hungry, the thirsty, the naked, the homeless, the prisoner, the foreigner, the outcast. Too often and too easily, in the past and in the present, the Orthodox Church degenerates institutionally into a political force for worldly power. Yet she remains her truest and freest self only to the measure that she manifests her interior ethos of servanthood to all and exercises that spiritual power which looks like weakness and foolishness in the eyes of the world.

Autocephaly delineates the territory, not of a political victory, but of the Church’s grace-filled opportunity to embody humbly in such a land, among such a people, within such earthly borders, the Kingdom not of this world which transcends all man-made divisions.

The Ukrainian government has conferred a wide measure of favored status on the newly autocephalous Church—suggestive of a church-state alliance that leaves Orthodox observers in the West distinctly uneasy.

The Ukrainian Church stands truly at a crossroads: will she choose the way of worldly hegemony and become a religious and moral tyrant, or will she partner with the state’s best instincts in creating a pluralistic Ukrainian society where all feel welcome, all free to live in peace with one another according to their own lights?

The Orthodox Church of Ukraine has a responsibility to love them all as the image of God, to serve them all, and to hold the government to account whenever the least of them is mistreated or overlooked by state power. At no time and in no fashion must the Church act as an agent of oppression or retaliation. She must proclaim the Gospel of Jesus Christ in season and out of season, not only in word, but also—perhaps more importantly—in action.

Metropolitan Epiphanius’ Nativity message (in English here) strikes just the right note. It instills hope in its readers near and far that under his shepherding the Church of Ukraine will set forth on the right path on this momentous day in her life.

Only by training her eyes daily on “the one thing needful, the good portion” (Lk 10:42), shining in the face of Christ, will the Church be sustained in this path by divine grace in this land and in this time.

Giacomo Sanfilippo is an Orthodox Christian of Ukrainian and Lemko descent on his mother’s side, a PhD student in Theological Studies at Trinity College in the University of Toronto, and the founding editor of Orthodoxy in Dialogue. He holds a BA in Sexuality Studies from York University and an MA in Theology from Regis College, both in Toronto, and is an alumnus of the Mark S. Bonham Centre for Sexual Diversity Studies at the University of Toronto. Earlier in life he completed the course work for the MDiv at St. Vladimir’s Orthodox Theological Seminary near New York City.

A blessed Feast of the Nativity to our brothers and sisters in Ukraine!

One thought on “THE KYIV POST: UKRAINIAN AUTOCEPHALY – A VICTORY OR OPPORTUNITY? by Giacomo Sanfilippo”