This is the ninth article in our On the Incarnation series for the Nativity season. 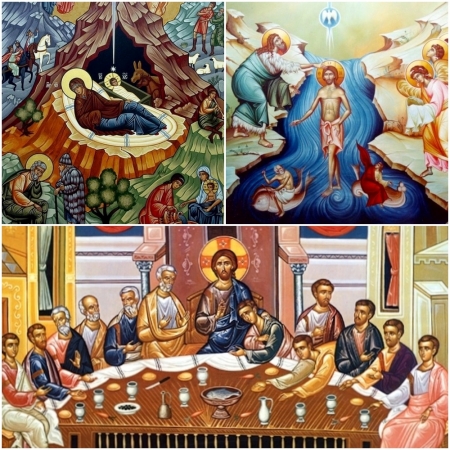 The season of Nativity through Theophany is rich with themes for our edifying contemplation. Central amongst these are new birth, as we celebrate the Word of God taking human flesh upon Himself, and baptism, as Christ sanctifies creation by entering the waters of the Jordan. Each season of the Church presents multiple facets for our consideration. This year, as we once again celebrate these Feasts of Light, one facet in particular might warrant our special attention.

The recent schism between the Patriarchates of Moscow and Constantinople is being billed as one of historic significance, perhaps on the level of the Great Schism of 1054. Time will tell. Whether it ends up being such, or merely a momentary hiccup in the overall unity of the Church, this Nativity-Theophany season can remind us of why we should care at all.

Orthodox tradition does not customarily associate the words of Christ’s priestly prayer for His disciples, “Father, keep through Thine own name those whom Thou hast given me, that they may be one, as we are” (Jn 17:11), with Christ’s nativity and baptism. They are read liturgically on Sundays of Fathers of the Ecumenical Councils, and soberly considered during the reading of the Gospels in the Matins of Holy Friday in anticipation of Christ’s offering of Himself upon the Cross. In these contexts, they are understood as referring to the future—what was to occur following the end of Christ’s earthly ministry. Though they pertain to the time posterior to Christ’s own birth and baptism, they inform the meaning of our own baptism, which is simultaneously our birth into the body of Christ. Indeed, Christ’s prayer was not only for those disciples who were present with Him, but “for them also who shall believe in me through their word” (v. 20).

“As many as have been baptized into Christ, have put on Christ. Alleluia!”

These words replace the Trisagion before the New Testament readings at several major Liturgies throughout the year—including the Liturgies for Nativity and Theophany—and before the readings that occur during the service of baptism itself. In these settings, they draw our attention to those who are entering the Church through that sacrament that imitates Christ’s own descent into the waters, and signify, amongst other things, their new birth—of the Spirit, this time, and not merely of water. Those who enter the font emerge from it as newborn children in the Kingdom of God. In doing so, they fulfill the promise of Theophany, and also Nativity. As the infant Jesus was entrusted to the Mother of God, so these newly baptized ones entrust themselves to her prayers, and to her spiritual embrace in the Church.

These words, “As many as have been baptized into Christ…,” were first written by St. Paul in his letter to the Galatians (3:27). There, he describes how the newly baptized inhabit a new reality, in which “there is neither Jew nor Greek, there is neither bond nor free, there is neither male nor female…,” because—and here is the point—through baptism, “ye are all one in Christ Jesus” (v. 28).

What we perhaps do not consider, in our reflection upon the meaning of baptism, is that we, in being baptized into the body of Christ, are baptized into each other, who are each the members of Christ’s body. What dies in baptism is the principle of individual ego. We are no longer pitted against each other in individual survival. Our basis for being is changed, and we are now “one body in Christ, and members one of another” (Rom 12:5). Our existence is no longer about personal merit or distinction, but about relationship and love.

As rote as this theme might seem to us, due to our repeated hearing of it in Scripture, hymns, and prayers, we have perhaps scarcely begun to realize its implications, even down to the level of what occurs during post-liturgy fellowship. If baptism and birth in Christ really do join us together as members of one body, we convey spiritual life to each other in our interactions, however much they may appear to be merely mortal or mundane. Our lives remain human, but our humanity is fulfilled by participation in the divine communion for which it was always intended. And, while the most immediate realization of this truth is, perhaps, in the local expression of the Church, it is equally true on the scale of the Church as it appears across nations and lands. “There is neither Jew nor Greek…for ye are all one in Christ Jesus.”

To the extent that our celebration of Nativity and Theophany fails to manifest this fruit, it remains a hollow commemoration. Divisions within the Church—both recent ones and those that have persisted for centuries—belie our claim to be recipients of the Spirit. The world looks in vain to see evidence of our proclamation, “Christ is born!” They cannot see the spiritual organism in which individual distinction is subsumed by communal love, because we have not allowed ourselves to become animated by the one Spirit. Baptism remains a beautiful but merely formal ceremony.

As we come towards the completion, once again, of this Festal Season, may our intentions and actions coincide with Christ’s prayer to his Father, “that they may be one, as we are.” May our celebration of these Feasts be, finally, in deed as much as in word.

V. Rev. Isaac Skidmore holds an MDiv from St. Vladimir’s Orthodox Theological Seminary and a PhD in Depth Psychology from Pacifica Graduate Institute in Carpinteria CA. He served as rector at Archangel Gabriel Orthodox Church (OCA) in Ashland OR during a decade of its growth as a mission parish, where he remains attached as auxiliary priest. He practices as a licensed counselor in Southern Oregon.

A blessed Feast of the Circumcision and St. Basil the Great, and a Happy New Year!

One thought on “ON THE INCARNATION: BORN AND BAPTIZED THAT WE MAY BE ONE by Archpriest Isaac Skidmore”