The Moscow Patriarchate—whether in the person of the Patriarch himself or his faithful mouthpiece, the Metropolitan of Volokolamsk—has repeatedly “predicted” bloodshed in Ukraine.

For them, the Ecumenical Patriarch’s restoration of “schismatics” to communion, or the Unification Council, or the imminent Tomos of Autocephaly, or the allegedly imminent seizure of churches and monasteries by the Orthodox Church of Ukraine, or the legislation of the Verkhovna Rada (Ukraine’s parliament) to require the Russian Orthodox Church in Ukraine to rename itself accurately, or…etc. etc, etc., can only lead to one outcome: death on a mass scale.

We say “predicted” in quotation marks because their “predictions” read more like a continuous, dog-whistled incitement to bloodshed—a Patriarchal blessing, if you will, to commit fratricide.

Ecumenical Patriarch Bartholomew has called for peace and non-violence in Ukraine. Metropolitan Epifaniy has pledged that there will be no forcible seizures of church property, and called for love and respect among Ukraine’s Orthodox Christians regardless of jurisdictional loyalties.

The drumbeat for violence and bloodshed in Ukraine comes from one source only: Moscow. 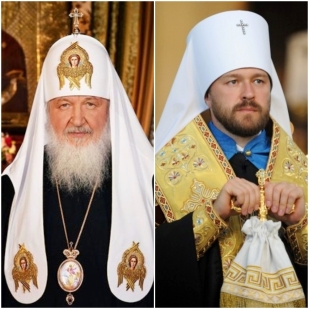 May Result in Bloody Conflicts

“Obviously, there is some ultimatum: if the church does not change its name, then it will be removed from the register; if the church changes its name then the severe pressure will be put on it, first of all, on the Ukrainian people, on community. Certainly, the enforcement actions for the confiscation of the churches will begin and all events around may result in the bloody conflict,” Kirill said.

The indicated law, which obliges the church with the center in the aggressor country to designate this in its official name, was adopted by the Verkhovna Rada on December 20. The conclusions of the Main Scientific and Expert Administration stated that the law does not comply with the principle of the secularity of power in Ukraine and contradicts the norms of the Constitution on equal rights, regardless of the profession of confession.

Christ is born! Glorify Him!