Patriarchs and Heads of the Local Churches in Jerusalem

Yesterday Patriarch Theophilus III of Jerusalem was first signatory among the Patriarchs and Heads of Local Churches in Jerusalem, which are historically based in the Holy City, in their joint plea to President Donald Trump. They wrote:

We are certain that such steps [by the American government] will yield increased hatred, conflict, violence and suffering in Jerusalem and the Holy Land, moving us farther from the goal of unity and deeper toward destructive division.

Their letter speaks of the desire to build a just, inclusive, and sustainable peace—and of their fears that such American actions risk upending such peace-building efforts. For us Christians, even at a distance, questions about Jerusalem must find a particular echo in our hearts, and summon our attention and our prayers.

[A PDF of the original letter has been provided by Haaretz here.]

I first met Jerusalem in 2001, in the midst of the last Palestinian intifada, when suicide bombings were a terrifying but not uncommon factor of daily life in that most complex and spiritually rich of cities. In the sixteen years since, I have wandered her streets, studied in her libraries, taught in her schools, feasted with her citizens, and prayed in her churches and synagogues. For part of the last several years, my home has been the Ecce Homo convent on the Via Dolorosa, right in the heart of the Old City, a stone’s throw from the Temple Mount/Haram al-Sharif. As a Christian, as a student of the Bible, and as an interfaith activist, I love Jerusalem deeply…but I also know the very real wound it represents in the lives of so many people. It simultaneously inspires me and breaks my heart. And I realize that there are so many levels to Jerusalem that an outsider like me will never fully grasp.

But, as someone who cherishes Jerusalem and wants security and peace for her peoples, I cringed when I learned that President Donald Trump intended to unilaterally declare that, in the eyes of the American government, Jerusalem was Israel’s capital.

In a certain sense, there is nothing novel or remarkable about this: for decades, the Israeli government has been based in Jerusalem, and all of its major institutions and agencies are headquartered there. Everyone knows that, and it has been the functional reality for generations. There is no real question that Jerusalem is Israel’s capital. You can’t visit Israel and not be convinced of that.

The problem lies in only saying that Jerusalem is the capital of Israel. Publicly emphasizing that fact—in the absence of a vigorous and serious American commitment to Israeli-Palestinian negotiations—cannot help but be heard by the Palestinians as “It is now impossible that any part of Jerusalem could also serve as the capital of a future Palestinian state.” I suspect that it is hard for many Palestinians not to hear this as effectively circumventing the stalled peace negotiations and rendering them superfluous, because one of the major issues under discussion has now been imposed as a fait accompli. President Trump, who prides himself on being the master of “the art of the deal,” has sidelined the (already anemic) Palestinian-Israeli conversation. By so clearly identifying the US with Israel’s political point of view (and only Israel’s point of view), he has more or less renounced any credibility that the United States had as an “honest broker” in those conversations—and that is unfortunate.

Both France and the United Kingdom were quick to reiterate what is nearly a global consensus: that it is entirely conceivable that Jerusalem serve as a shared capital for two peoples (Israelis and Palestinians), and that any actions to prejudge the outcome of the Jerusalem question only harm the cause of long-term peace. 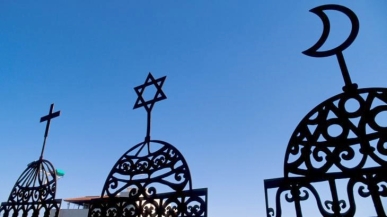 Others pointed to the Vatican’s long-time suggestion that—because of its unique importance to the three Abrahamic faiths—Jerusalem be “set apart” as a city for all humanity, with a unique, internationally guaranteed status, rather than belong to any country or countries.

The Israeli government has for decades said that, having finally reclaimed and reunited Jerusalem during wars that threatened Israel’s very existence, the Israeli claim to Jerusalem as Israel’s “eternal and indivisible capital” is not negotiable. Especially considering the United Nations’ reputation for repeatedly censuring Israel in a way it censures no other country, the idea that the UN could be the body to guarantee such a status is a non-starter.

The fact is, however, that large sections of today’s city of Jerusalem are already predominantly inhabited by Palestinians. Jerusalem’s population is close to 860,000, but more than 300,000 of those people are Palestinians, largely concentrated in the area known as East Jerusalem (which includes the Old City, and therefore the most important religious sites). These areas—captured during the Six-Day War in 1967—were annexed in June 1967 by the government of Israel, and became de facto part of the State of Israel and of the “reunified” Jerusalem.

But this legal maneuver (rejected by most nations) did not alter the facts on the ground. East Jerusalem remains palpably different from the rest of Jerusalem: its neighbourhoods are predominantly Arab-speaking and Muslim, and most of its Palestinian residents do not possess full Israeli citizenship. More than 70% of its population lives in poverty, and nearly 30% of its men are unemployed. Its residents have (by their own choice) the most slender of relationships to the Jerusalem municipality and municipal services. It looks and feels—and is—very different from West Jerusalem, which is predominantly Jewish. While they may be “united” to Jerusalem by Israeli law, these neighbourhoods are, in fact, almost another world from the world in which most Israelis live. Efforts to encourage mingling between East and West Jerusalemites have met with limited success.

The burden of history there is heavy. For the decades of Jordanian control of the Old City (1948-67), Jews were not allowed access to their own holy places. They are not prepared to hand over decision-making about the Western Wall and the Jewish Quarter to any third party, however well-intentioned. Depending on how one defines “East Jerusalem,” those quintessentially Jewish sites could fall under the jurisdiction of a future Palestinian state, a situation that is simply unthinkable to Israelis and to most Jews in the Diaspora.

It is easy to point fingers in the current diplomatic stalemate between Israelis and Palestinians. Each side routinely blames the other for the current lack of negotiations. Although major world powers can perhaps nudge the partners to keep talking, ultimately only the Palestinians and the Israelis can arrive at an agreement that can resolve this decades-long impasse. Inasmuch as the hope for an eventual capital in East Jerusalem is emotionally and politically central to the Palestinians, the rhetoric of “Jerusalem for Israelis” is superficial and unhelpful. It vastly oversimplifies the complexity of the city and its history, in the service of a message intended to satisfy certain segments of Trump’s constituency (especially some Evangelical Christian groups who view the history of modern Israel through the lens of Biblical prophecy, and with a romanticized perspective that is often disconnected from the realities of everyday life).

The problem, I believe, is not so much in publicly acknowledging Jerusalem’s status as Israel’s capital; that is a fact that is nearly undeniable. The problem lies in not also acknowledging the aspirations of the Palestinian people to a state…a state that hopes to one day base its capital in a section of Jerusalem. Mr. Trump’s announcement seems to rule out, as unrealizable now, this component in the Palestinian national vision, and he seems to have taken it off the table as a question subject to negotiation. His decision to transfer the US embassy to Jerusalem from Tel Aviv feels like an endorsement of the political status quo, at the same time that he said, “We are not taking a position on any final status issues, including the specific boundaries of the Israeli sovereignty in Jerusalem, or the resolution of contested borders. Those questions are up to the parties involved.”

The US decision certainly feels like it is affirming the long-standing Israeli claim to all of Jerusalem as its “undivided and indivisible” capital city—a claim that effectively precludes any Palestinian hopes of an eventual capital in a portion of the city. It feels like the Americans are so closely allying themselves to a particular political vision of Israel that they leave relatively little space for the Palestinians—and it is this perception that has roiled the diplomatic world in recent days.

No city is like Jerusalem in its majestic beauty and spiritual richness; no city has known as much grief, torment, and violence. Our Christian vocation is to be “artisans of peace” (Mt 5:9), to “seek peace and pursue it” (Ps 34:14). In these troubling times, may we find ways to be agents of that peace, and to avoid words and actions that can only further polarize and further inflame.

Mr. Trump’s decision, while it will gratify large swaths of his supporters, seems to me to distance us from the day when Jerusalem can be the city of divine peace and harmony it was intended to be.

Murray Watson is a Roman Catholic Biblical scholar and interfaith educator who has lived, studied, and taught for many years in the heart of Jerusalem’s Old City. He holds a PhD in Biblical Studies from Trinity College, Dublin, and teaches on the Faculty of Theology of Huron University College (an affiliate of Western University) in London ON. He writes and speaks widely on topics related to interreligious dialogue, and especially the Jewish-Christian relationship. He also serves as a consultant to Canada’s Catholic bishops on interfaith and Biblical matters.

2 thoughts on “JERUSALEM: A HELPFUL DECISION? by Murray Watson”