For context see the Metropolitan Joseph: The Scandal section in our Archives 2020-23 linked at the top of this page. Most noteworthy in the following Open Letter is the Board of Trustees’ flagrant violation of the canons and the Archdiocesan constitution in nominating the Patriarchal Vicar as Metropolitan of the Antiochian Orthodox Christian Archdiocese of North America. This and other questions raised below acquire added urgency as the Special Convention to elect the new Metropolitan takes place on January 13, a week from today. How can the faithful of the Antiochian Archdiocese trust that the process be conducted properly?

The Vicar’s letter withdrawing his name from consideration and other pertinent information are attached below.

In our last parish council meeting, council members had many questions regarding the nomination process to elect the next Metropolitan of The Antiochian Orthodox Church of North America. Many have received emails about the process, and most of them are well informed about the qualifications for Metropolitan Archbishop and Diocesan Bishop according to both the Patriarchate and Archdiocesan constitutions. They follow the Archdiocese news on social media, and they are confused by the contradicting and non-transparent messages coming from the Patriarchal Vicar and his committee (Vicar, bishops, and Board of Trustees) at the Headquarters of the Antiochian Archdiocese in Englewood NJ.

Why aren’t the Vicar and his committee communicating back to all parishes the questions and responses that people have been asking the Patriarchal Vicar as he’s been touring North America? Are other parishes also not privy to this information?

Why didn’t the Vicar and his committee adhere to the terms of qualifications for Metropolitan Archbishop and Diocesan Bishop according to the constitutions when it published the list of candidates? Reading the biographies of these candidates shows many clergy on the list are not qualified and yet at the same time, why does the Archdiocese expect laity to comply with the letter it sent, defining “who can be a voting delegate at the Special Convention” according to the same constitutions? Is this not a  hypocrisy and contradiction?

Shouldn’t we expect our church leaders to abide by the constitutions and translate their teachings into action?

Fortunately, two leaders obeyed the constitutions: Archimandrite Fadi Rabbat, a qualified candidate, withdrew his name from the list of candidates in respect of seniority and experience of other candidates. And, the Patriarchal Vicar, Metropolitan Antonios, withdrew his name due to the fact that he is the Metropolitan of Zahle, Baalbek, and Dependencies and according to the Apostolic canon 14, “A Bishop shall not abandon his own parish and go outside of it….” (The 85 Canons of the Apostles).

Unfortunately, the Vicar and his committee have released the list with six unqualified candidates according to the constitutions. Therefore, why has Metropolitan Saba not followed Metropolitan Antonios’ example in abiding by Apostolic Canon #14 and withdrawn his name from the list since he is the Metropolitan of Basra Horan, and Jabal al-Arab in Syria?

Also, why are other bishops, (like Bishop John, Bishop Thomas, Bishop Anthony, and Bishop Alexander) as well as Archimandrite Jeremy not following suit and withdrawing their names from the list since they are either over 64 years old, or do not have a good working knowledge of the Arabic language, or both in accordance with the constitutions?

With the lack of transparency and abundant disregard to adhering to the constitutions, how can we trust that a fair and legitimate voting process be conducted? Where are the instructions and clarification on the process of casting the votes? How will these votes be counted? Will there be independent observers to ensure fairness and accountability while the votes are counted? What is the Vicar and his committee’s course of action with regards to this process?

Let’s hope and pray the Vicar and his committee and our leaders will listen and address these concerning issues. 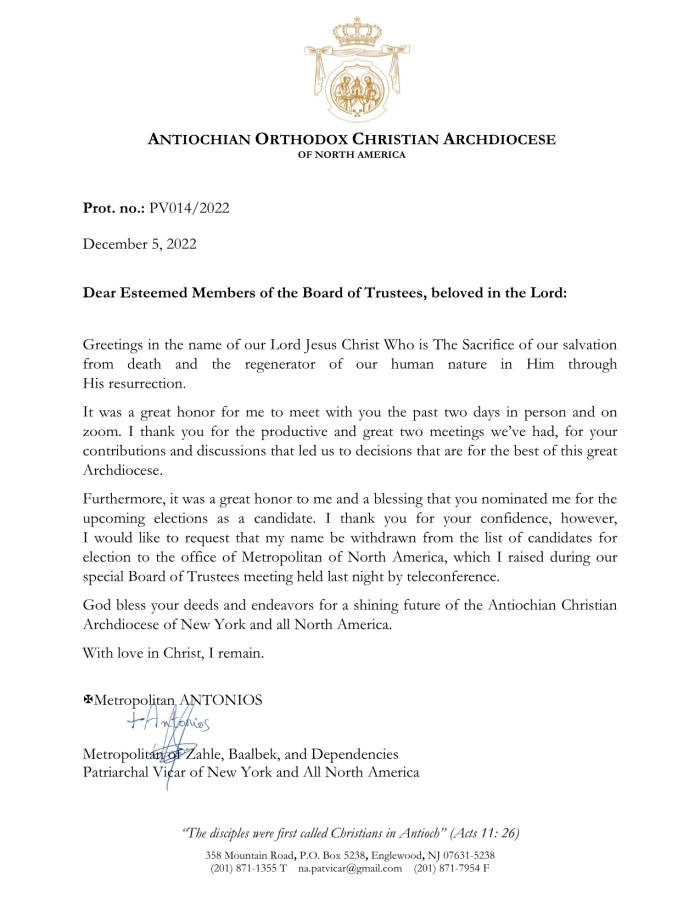 From the Patriarchate Constitution

From the Archdiocesan Constitution

A most blessed and joyful Feast of Theophany to all our brothers, sisters, and siblings in Christ around the world!